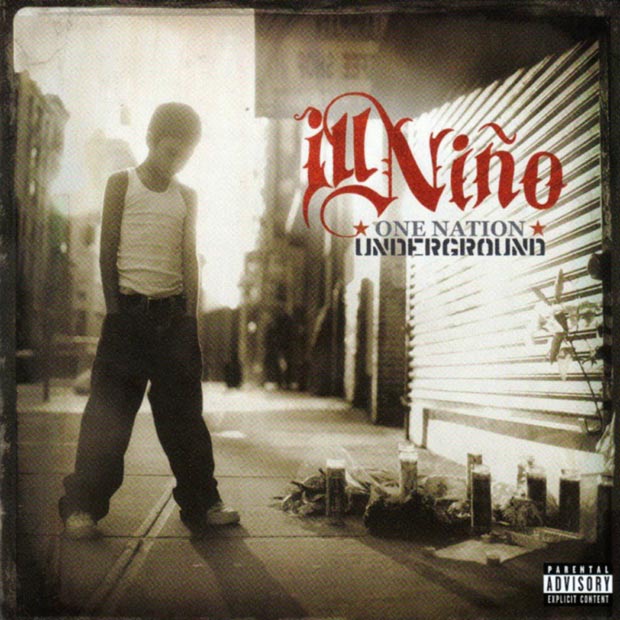 Ill Niño have a very distinguished sound. Tribal elements, with heavy pounding drums, and melodically structured vocals and guitar make Ill Niño a band that makes people flock to them. Rather then try to sound like every other band, Ill Niño distance them self far apart from every band in their genre.

Their new album One Nation Underground is for sure to please the normal Ill Nino fan, but at the same time, the way they offer heavy tracks with their catchy melodic tracks, it will be sure to draw in a whole new legion of fans as well. Especially songs like “Turns to Gray” which features guest vocals by Hatebreed frontman Jamey Jasta.

Their Latin vibe is still very much present in the vocal stylings of Ill Niño frontman Christian and this just further sets them apart from other heavy bands.

The band recently put out a video for the song “What you Deserve”, and released their song “This Is War” online to fans before the album dropped, and already the album is creating a great buzz for the band. I think a video for “All I Ask For” or possibly even “Turns to Gray” would make a very good follow up video and would keep the album’s success on the rise.

I think the guitar riffs and sound on this album are a lot better then their previous efforts and show how the band has even evolved member by member. The drums sound tighter then ever before, and the vocals have grown a lot in a better direction for sure, and over all the band is getting more into their zone clearly showing how they will be a dominant force for Roadrunner Records for quite a while longer.

The new Ill Niño album is the perfect mix between the raw and heavy side of their album Revolution Revolución and the melodic and catchy side of Confessions all with a twist of something new.

This album is a must have for any music fan. It is very well rounded, and wont disappoint. If you were already a fan of Ill Niño, this album will for sure make you love them more and more each time you put it into your CD players. [END]

Notable songs: This is War, Turns to Gray, What you Deserve, All I Ask For.  [ END ]