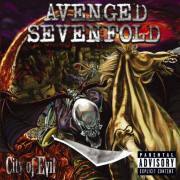 Avenged Sevenfold, or as their fans call them, A7X is a band that says they want to save Metal. World domination is what they strive for, and with an album like City of Evil, they are sure to start blowing up all over the air waves. Their last album Waking The Fallen was nothing short of genius. Then they bring us the much awaited follow up City of Evil. The whole album has a very interesting theme, and the songs almost tell a story.

There is more of a mainstream twist to this record, vocalist “M. Shadows” seems to have toned down the screaming on this record, his singing is more dominant, and he shows a lot of emotion through his lyrics and how he presents them.

“M. Shadows” recently under went some vocal surgery, and I feel it has only made his singing stronger and better. I am not sure if the surgery is what caused him to tone down the screaming on this record, but either way, his vocal performance for the whole album may be a bit of an acquired taste; but it is for sure amazing.

Their first video off this album is for a song entitled “Bat Country”. It is an awesome video, and if you are a fan, check out their web site to watch the video.

Avenged Sevenfold prove with City of Evil that they are in a league of their own and know how to stand out above the rest. This combination will truly make them a band that will no doubt dominate the air waves very soon, especially with great songs like “Bat Country” and “Seize the Day”.

Expect to be hearing lots from these guys really soon. Their fan base is growing rapidly by the day, and if they keep putting out these killer albums, they will be around for a long time. Avenged Sevenfold does not seem to be going anywhere but up.  [ END ]

Notable songs: Bat Country, Seize the Day, Blinded In Chains, MIA, The Beast And The Harlot.