Belgian alt-rock outfit Monolithe Noir have just released “Barra Bouge”, the third single lifted from their upcoming new album RIN which is set to be released this summer.

On “Barra Bouge”, Monolithe Noir channel their Arabic influences and join forces with Tunisian singer Jawhar and rising violinist Mirabelle Gilis for a track which has its origin rooted in an underground improvisation with a message that is clear and an atmosphere that is both stormy and haunting.

Speaking about the meaning behind the track, Monolithe Noir explained:

“The lyrics of ‘Barra Bouge’ speak directly to the protagonist of its verses. It seeks to travel along with them, build stairs and caves in the wilderness, to raise animals and make love in the night. All of its verses begin with the melancholy tinge of I would have liked… But reality, in all its gloom, is always knocking at our door, despite how much we want to tell it to go away. In Arabic ‘barrra bouge’ means fuck off.” 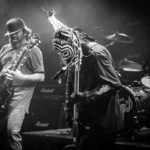