Guided by artistic desire and extraordinaire curiosity, Robert Lundberg has become a highly regarded photographer and filmmaker, lauded for his innovative and versatile documentaries covering the worlds of music, comedy, art, and film. After spending his formative years in Massachusetts, Lundberg moved to New York City where he more actively pursued a full-time career in art and film. Uniquely focused on seeking out the next big artistic challenge, Lundberg chose to pursue one of his most ambitious projects at the beginning of 2020 when he launched his new documentary series entitled Uncontaminated Sound – The Interviews.

Debuting in February of 2020, the series follows comedians, musicians, fine artists, and actors with Lundberg’s primary goal to gain a particular insight into their creative processes which can only be thoroughly deciphered by truly going behind the scenes. With Uncontaminated Sound, Lundberg’s purpose is to offer an intimate look into all of the rarely seen or known “little things” that take place during interviews and other similar social and private interactions with artists and performers. Mainstream features are often heavily and unevenly edited, offering viewers only individual, preferred moments. In contrast, Lundberg is dedicated to delivering to you all of the real, raw, authentic moments that you would never otherwise have the opportunity to experience.

With another two weeks gone by, Lundberg has reemerged with another one of his exceptional conversations. In the latest episode of Uncontaminated Sound, Lundberg spoke with musician and illustrator Jeffrey Lewis. Born and raised in Lower East side Manhattan, Lewis’ career has been defined by his grungy, urban indie-folk that mashes up late 1990s New York City indie with semblances of artistic garage rock. 2021 has been a monumental year for Lewis, as it marks the 20th anniversary of the release of his debut album The Last Time I Did Acid I Went Insane and Other Favorites via Rough Trade Records. He now fronts the band Jeffrey Lewis & The Voltage who released their most recent album Bad Wiring in late 2019, via Don Giovanni Records and Moshi Moshi Records.

The band had a lot of touring planned for 2020 off the album’s release, but with many of those plans shelved by the pandemic, Lewis focused more on the visual arts side of his career. He worked on new comic book projects and concentrated on his comic book series titled Fuff that has been in publication since 2004. With the music industry making a comeback now, Lewis is happy to be back out on the road with his bandmates and collaborators Brent Cole (drums) and Mem Pahl (bass, keys), rekindling that live magic that has been the driving force behind the band ever since they got on stage two decades ago.

Commenting on the interview, Lundberg shares,

“My first on-location interview in 18 months was surreal, to say the least. The awkwardness of meeting a stranger these post-pandemic days triggered the lingering trepidation & the where do I sit conundrum. However, the sounds of Tompkins Square Park awakened my spirit to this same but new reality.

“Needless to say, my convo with LES native illustrator and musician Jeffrey Lewis started with him asking if I hit record on my field recorder, which I actually did not. A few minutes later Jeffrey was kissed by a pigeon above. Surreal to say the least.

“Despite, all these on-location snafus Jeffrey and I dove into a deep side-by-side convo about the struggles of contemporary musicians and artists, how might we bounce back. Please enjoy this on-site recording.” 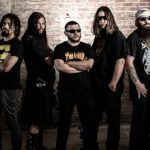 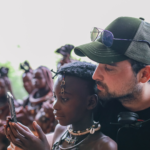