Welcome to the sound of catharsis in 2021. Having had the honour of being the first band to perform at this year’s Download Festival Pilot, Liverpool bruisers Death Blooms are now ready to unleash their debut album, Life Is Pain. Setting its intentions out early on, opener “Shut Up” hits like a ten-tonne weight being dropped on your head, with frontman Paul Barrow howling at you to “Shut the fuck up” over wave after wave of electronic-drenched metalcore.

After that ferocious start, the rest of Life Is Pain sounds like someone has opened a tap with the next twenty-five minutes seeing the Liverpudlian wrecking crew unleashing an outpouring of frustration, anger, rage and vitriol. Through the likes of “In Your Head,” the jarring “Caught In The Web” and the relentless “Anger,” this is an album with no nice bits. Yes, there are moments where Barrow’s vocals take a cleaner direction but, for the most part, his lyrics are delivered with the rage of a man truly on the edge over a soundtrack of nu-metal-tinged angst and frustration.

Cynics could probably argue the fact that the simple hooks and catchy choruses have been done a million times before by bands like Slipknot but, if you really examine the frustration and out n’ out rage on display, there is more to Death Blooms. Yes, the chorus for “Shut Up” could have been written by a fifteen-year-old having a shit day in maths but, to be delivered with the almost murderous intention that Barrow does, can only come from sitting locked in a grotty flat in Liverpool wanting to punch the fuck out of the next person you encounter. This isn’t contrived, this is how genuine isolation and misery sounds.

The spoken-word delivery during “Choke” is truly disturbing while the haunting “Inside” brings the album to a powerful finale. At times dipping into melodies reminiscent of Linkin Park, the closer might be the polar opposite to the rest of this fury-filled album but it is no less chilling. Joining the growing list of UK bands spitting out material written from the darkest depths of their souls, Death Blooms, on the evidence of this collection of songs, are one of those most lethal. 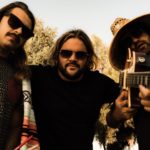