Live music is well and truly back, and this show proved it as a sold-out Deaf Ivwnstitute hosted Hands Off Gretel’s return to Manchester five dates into their long-delayed “Still Angry” tour. This, in all honesty, is THE show I’ve been waiting for since the pandemic stopped everything. They were one of the last bands I saw before it hit and every time I see a Hands Off Gretel show I want to see another.

Feisty rockers Scarlet opened the show, their first in 18 months, with a riotous set that included two new songs written in lockdown. They didn’t look or sound like they’d not played live in a while and they seemed to enjoy it as much as the audience did, and the audience LOVED it. Manchester’s The Empty Page brought a fuzzier and harsher sound to the stage with a more in-your-face approach. They raised the temperature in what was already a hot and sweaty room and melted some faces with some heartfelt screaming. 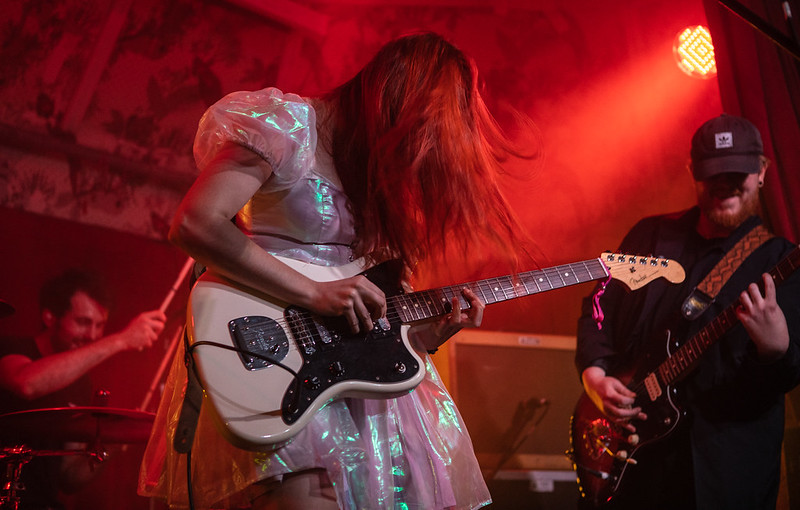 As Hands Off Gretel took the stage, the combination of the boxy curtain-framed stage, a giant disco ball and Lauren’s blue princess dress gave the feeling that we were watching a show inside of a charming music box, a grungy one that lives on the dressing table of a girl that dreams of being the next Lauren Tate.

The show was full of classic HoG moments from start to finish, from the primal anger of “Milk,” the cat-inspired “Alien” and the lung-busting singalong of “It’s My Fault” amongst the highlights. For just over an hour the whole audience was truly captivated.

With this tour having been delayed by the pandemic you’d wonder if the band needed a few shows to get going again, but by all accounts, the shows have all been fantastic and tonight’s was HoG at full throttle with Sean taking vicious swipes at his guitar, Becky showing why she’s the greatest bass player out there and Sam, tucked away at the back beating the living daylights out of his kit.

Lauren’s ability to connect with the audience is well suited to this size venue when she can be as up close and personal as being sensible about Covid allows. But Hands Off Gretel is a band that should, and will, be selling out venues two or three times the size of this one, if not larger.

They have plenty of shows left on this run for you to catch them in these size venues, which you should do because if there’s any justice at all it will be your last chance before they explode!

Visit handsoffgretel.co.uk/tour to see where you can catch them.