It’s your lucky day! Why? Because we’ve got an incomparable summer jam for you! Pop-punkers ALMOST have unleashed their latest single, “What Did You Learn Last?,” a fiery power anthem that serves up that high energy you’re looking for as you say welcome to the summer.

Defined by its synths and dramatic tone, the song is about being in your 20s and feeling like you’re already burnt out. Your 20s are that decade where you really begin to get focused on making something of yourself. Your teens are all fun and games, but your 20s hit you with that dose of reality that damn, you gotta do something with your life! As confusing as your teens are, your 20s are even more so, with life decisions coming at you a hundred miles an hour. “What Did You Learn Last?” acknowledges this complicated time that everyone must go through, with a wit and sarcasm that only ALMOST are capable of.

Commenting on the new single, vocalist Olly Rheins said, “‘What Did You Learn Last’ is an ode to your 20s. Messy, ever-changing, and constantly trying to discover the best version of yourself. People believe their 20s to be this significant period of time that defines them, but really it’s mostly spent gassing your overinflated ego while being wasted and trying to figure out if you even fit in with your friends. Are you really proud of yourself? Did you waste your time? What’s my worth? Did I really learn a damn thing at all? Dramatic, theatrical, and sarcastic ‘What Did You Learn Last?’ was meant for running out that door, and singing at the top of your lungs on that car ride with your friends.”

Based in Toronto, ALMOST are out to rekindle the positive vibes of mid-2000s emo and pop-punk, a time when My Chemical Romance, The Killers, and Panic At The Disco were redefining the genre for a whole new generation. Led by singer and pianist Olly Rheins, guitarist Jackson Locklear, bassist Sammantha Duncomb, and drummer Charlie Andrews, the group was recently formed, however, the members have known one another now for years. All veterans of the local scene, there were a few false starts before ALMOST finally formed. They all had a familiarity with each other, had many mutual friends and acquaintances, but the idea to form a band didn’t come about until quite recently.

There’s a certain nostalgic tone that powers the group, which they combine with a theatrical experience to create music that will move you, in more ways than one. 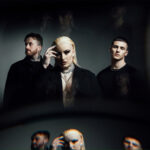 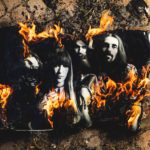