In Culling Culture, Hertfordshire tech death metal band Vexed has put out one of the finest slabs of heavy music you’re likely to hear in a long time. Hugely personal lyrics pepper the album all soaked up in a barrage of gut-wrenching heaviness. With the album due to drop later this month (read our recent review), we spoke to vocalist Megan Targett about the lyrics, the support of her family, and her journey into the world of heavy music.

Thanks for your time, I really appreciate it. Firstly, the album is incredible. I’m really looking forward to hearing those songs live…

Megan Targett: “Yeah, that’s why we do this is for the live shows rather than just experiencing everything from our bedrooms.”

So the album title Culling Culture talks about cancel culture and that whole subject. Was there a particular moment or event that triggered you or inspired you for the title?

“Not particularly. We were really, really struggling to come up with an album title. The album was ready and we were getting everything sorted for it but the last thing was a title. We knew that it was our debut with a label. We were like, it can’t be cringe. It can’t be terrible. We had like 50 different titles that we were going through but this one came about at the time where the whole cancel culture was a thing and because each track is about an individual person who we’ve cut from our lives, took inspiration from that. Instead of focusing on the outward world and the rest of the world focus on your inner circle and cancel people who, you know, bringing nothing but shit. So yeah, we took inspiration from it, but on a more personal level.”

I was going to ask, there are some of the tracks like “Hideous” that come from a very personal slant. Is that the case and what do you get out of that? As you said, each track is about an individual person…

“It’s quite funny because they still live locally. I still see them and it does make me giggle. I just wrote something about you, and you’ve got no idea. So, yeah, it’s really personal but it’s also like therapy, kind of writing it all down and getting it out and then letting go.”

Ok, so almost like putting that particular chapter behind you?

Ok, on the subject of our cancel culture, there’s been a lot of talk recently about social media giants like Facebook and Twitter not taking responsibility for the content or taking responsibility for what’s posted or anything like that. Do you think that the recent blackout by major sports organizations, where they didn’t post on social media for an entire weekend, makes a difference? Or do you think the whole social media has become a beast that can’t really be controlled anymore?

“I think not posting for a day or two would be brilliant for the individual. Any opportunity to turn my phone off and I advise other people to do it. If you can have a day without your phone. Obviously, texts and calls are different but just come offline. It’s so helpful. I think as a whole though, it’s so far gone. There are no consequences for being an asshole. There are no consequences for being racist or homophobic. You can say anything, and you don’t get called out for it and, if you do, that’s the worst that happens. So, either there needs to be a huge change in the law when it comes to the internet, or it is something that’s too far gone, and you either have to opt yourself out of it or not.”

I’ve seen a recent interview about you discovering heavy music, that whole lifestyle. What was that life-changing moment for you?

“I grew up with heavy music around me all the time. So it was a very normal thing. But my life-changing moment was in school. I went to a school for kids who were either really badly bullied or had illnesses. I was bullied really badly at school, was home-educated for a couple of years, and then went into this special school. I went into one of the classrooms and a lad was playing Bring Me The Horizon’s ‘Chelsea Smile’ and I was just like, what is this? I was 13 at the time, and I was in love with this music.

Then I kind of fell down the rabbit hole of looking for Bring Me The Horizon and watching every YouTube video and every interview they’d ever done. I went to go see them live and it was that moment in the, in the pit at the show. I went with my mum as I had no friends to go with. I was by myself in the pit and she was at the back. I knew that this is what I want to do.”

In terms of singers or albums that really kind of really connected with your what, who or what were the important ones?

“So, Suicide Season by Bring Me The Horizon. Then it would have to be Slipknot. Corey Taylor was huge for me. The Subliminal Verses and Iowa are just amazing. And also System of a Down. I am a huge, huge SOAD fan. Toxicity is still one of my favourite.”

You’ve talked about school and those experiences. The Sophie Lancaster case has been back in the press recently again because of the story in Coronation Street. From what you’ve talked about, what was your experience of being a metal fan in an English town?

“It was good and bad. I’ve always lived in the countryside so, whenever I went into the towns, there were loads of other kids like me, but yeah, but then when I was in the village, I was a weirdo. You know, I was that girl walking around with fingerless gloves in the heat of summer. I didn’t necessarily have awful experiences like Sophie but, it was in school that I was made to feel like an outcast. Still to this day as an adult I get shit for the way I dress because I dress in trackies and hoodies and streetwear and people take the piss out of me now. I think, wherever you go in any form of life, there are going to be assholes who judge you for just being you. Unfortunately, there’s no way of escaping it only by remembering that you’re not actually the problem, it’s them.”

Going back to what you said about being that person looking up and seeing Oli on stage. Can you just talk us through what that moment was like? What was the connection for you?

“Weirdly, my mum wrote to the band when I was at school and I was really, really depressed because a lot was going on at home. The band actually wrote back to my mum and said, bring her to the show we’d like to meet her. I went backstage and sat with Oli and the other boys and they chatted to me for hours. There are some photos of me and I’ll have to try and dig them up because it’s so funny. I was like, 13 and I’d spent hours getting ready and like trying to look really cool. I look at the photos now and it’s so tragic. Oli was just lovely. He just sat and talked to me like a normal human being and it was just that moment of feeling like I was no longer an outcast, and I found a place where it was ok to be me. And I wasn’t being judged for it.

So when they went on stage, and I walked off into the pit, it was like, ‘Wow, I’ve just been sat in a room talking to this man for an hour and he’s now performing and I’ve never felt more accepted and more at home.’ It was like coming home. It was just like a feeling of belonging.”

“Well, before I had no direction for what I wanted to do. I was the worst student in school. Even though I got good grades I didn’t want to learn. I hated it there. So, after that moment, it was like, right, I know my purpose now. I’m going to go form bands. I’m going to learn how to scream. I’m going to nerd out and you know, fully enrolled into this world. So yeah, it gave me purpose.”

You’ve talked about your mum. She’s obviously very supportive for what you do and your lifestyle?

“It’s so important. I think having anybody who is close to you tell you that you can do what you want, no matter how ridiculous it sounds, is really important. I feel so awful for kids that don’t have that. Just not having that support system is awful. Nearly everybody that has come and gone from my life has told me I would never make it and that it was ridiculous and they would always kind of see the band is a bit of a joke. But my mum and my granddad knew I was serious and that was really grounding. Every time I had doubts or felt like I was wasting my time, they were just always telling me to keep going and don’t stop. I’m very grateful for them.”

In terms of people that doubted you and said, you know, you’re not going to make it or whatever, does this feel like karma?

“I try not to indulge too much into that because it comes across as bitchy but, fuck, it’s the biggest fuck-you and the best feeling ever. It’s great.”

Prior to the album, you collaborated with CJ McMahon from Thy Art Is Murder on “Elite.” As a singer, what did you learn from that experience?

“I mean before we got signed and stuff there was always seeds of self-doubt like imposter syndrome. But, working with CJ made me realize that not only does it not really matter what anybody else thinks, you know, somebody like him, valued our work, and valued me as a human being. He didn’t care that I’m a woman, he didn’t care that I’m English or that we’re a particular genre, he just liked our stuff and that’s all that matters. So he just taught me that whenever we’re having those moments of self-doubt, remember we’re doing something good.”

Perfect. I think we’ve got everything covered. Thanks for your time Megan, over to you to wrap things up…

“Thank you for having us and if you want to check out the band and listen to our debut album please do. If you made an effort to go online and listen, please be nice, we really appreciate it. Hopefully, we’ll be able to announce tour dates soon so look out for those.” 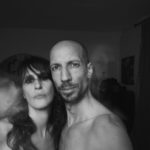 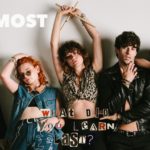 Pop-Punkers ALMOST Deliver a High-Energy Summer Jam with New Single “What Did You Learn Last?” [Premiere]