Typically speaking, you don’t see a lot of seven-minute post-hardcore songs, but there’s nothing much typical about No Year. The Portland, Oregon quartet is thrilled to be releasing their brand new single and music video for “What People Say,” coming from their latest album, So Long. The song is a relentlessly intense barnburner that you kind of hope never ends. It’s accompanied by an equally frantic music video that really matches the speed and the frenetic energy of the song, directed and produced by the highly respected Drew Steadham, whom the band has been eager to work with for some time.

“What People Say” is full of energy, the type of song that will make you miss the mosh pit even more than you already do. It’s an extremely refined, and well-developed sound for a band that just released its debut album a couple of weeks ago.

The value and presence of Steadham as the director cannot be understated. Simply put, the song wouldn’t be the same without the video. As singer and guitarist Neal Munson explained, “When we started talking about doing a video for ‘What People Say,’ we knew right away we wanted Drew to make it. We go way back, are big fans of his art and just knew he was gonna get what we were going for with the song. With very minimal prompting he just went for it and the video completely blew us away. I can speak for the whole band when I say the song actually wasn’t a complete piece until we saw the video.”

Explaining his thought process behind his intentions for this video, Steadham said, “We’re all navigating our bodies around objects, through space and time, amidst struggle, with varying degrees of success. If there’s a lighthouse in there somewhere (whatever it may be) it’ll be alright. That’s what the song is to me and what I wanted the video to portray. I hope I got it right.”

Released on January 29th via Inferior Planet, So Long was recorded at Portland’s Stop / Start and Haywire Studios in the fall of 2019. Over the course of five tracks, three of which clock in around the ten-minute mark, the band zigzags its way through a maze of ‘90s rock, shoegaze, noise rock, and modern and classic post-hardcore that makes sure to pay homage to the legacy of the early ‘90s “San Diego sound,” popularized by the highly influential Gravity Records.

Thematically, No Year’s music considers themes of loss, sorrow, confusion, and alienation, all important topics that have never been so widespread and relevant as right now. There is both a desperation and a positivity to the record, reflective of the current mood of society. Throw in some big choruses, and you got an album that will help you drain all of that negative energy you’ve been hauling around. 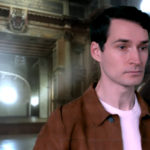