It shouldn’t be A Giant Leap Of Faith for you to sink your teeth right into the debut EP from Spectrograph. This is a most exciting time for the duo, with their debut EP set for release tomorrow, November 27th via Depths Records (pre-save the album here), but here for you right now in its entirety! This is a very dense piece of music that excels in constructing deep, dark, and at times haunting atmospheres within a wide span of post-industrial rock.

A duo extremely dedicated to their influences, the EP’s four tracks draw inspiration from many of the darkwave and industrial innovators of the last 30 years, including Death In June, Vatican Shadow, The Cure, and Dead Can Dance. The production is slick with an unmistakable electronic style of arranging and direction that has resulted in four ingenious remixes of original tracks that never existed.

Commenting on the defining elements of A Giant Leap Of Faith, Virginia Bones said, “The EP is a collection of industrial, dark and tormented pieces of music. We were going to a lot of post-industrial gigs at the time, bands like The Young Gods, Front 242, The Cure, and Dead Can Dance, just to name a few, and that inspired us to create the sound for Spectrograph. We originally named the band Dead Kittens for Christmas as that was the feeling we were trying to convey. That sort of dark, disappointment in a context that should normally be joyful. That’s what we felt the world around us was like and that hasn’t changed very much since. In fact it’s probably worse now so what better time to put out this EP. We’re working on slightly more ambient sounds at the moment.”

The release of the EP is a culmination of years of hard work and perseverance to get to this point. The origins of Spectrograph extend back to 2012 when producer and DJ Phiorio and singer and musician Virginia Bones decided to pursue something creative together. Bones is best known for her role as the co-founder and lead singer for the dream pop, shoegaze duo Geography Of The Moon, alongside Santa Pazienza.

The idea to collaborate on original music arose when Phiorio began mixing and post-producing a lot of experimental sounds and vocal lines that Bones had recorded. Her avant-garde vocal style is one of the most distinctive elements of A Giant Leap of Faith with Phiorio providing just the right type of ambience for it all. If it’s starting to feel a little dark and eerie then Spectrograph are succeeding at what they do best. 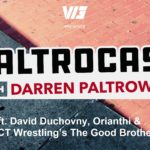 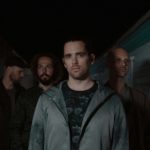