Besides talking about new albums and life during COVID-19, conversation topics include TalkNShopAmania, IMPACT Wrestling, New York, Van Halen, branding and productivity. All interviews recorded in October or November 2020.

Our guests from top to bottom: David Duchovny, Orianthi, The Good Brothers 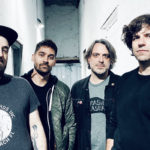