Coming at you, with their feet planted firmly in the garage is Miesha & The Spanks. Miesha Louie and her rock n’ roll cohort Sean Hamilton have been slowly climbing the garage rock ladder, establishing themselves as a mainstay of the local Calgary, Alberta scene since their 2008 inception. The duo has worked hard in that time to gain some much-deserved notoriety, traversing Canada east and west many times over, playing both small towns and big cities.

Their 2018 album, Girls Girls Girls, was something of a breakthrough for them as they hooked up with the very awesome Danny Farrant, drummer for The Buzzcocks, who produced the record. Farrant is a big believer in the duo, as have been many other big-name acts like Queens of The Stone Age, Death From Above 1979, Hot Snakes, and Reign Wolf, all of for whom Miesha & The Spanks have opened.

Miesha and Hamilton are currently hard at work on their new EP titled Singles which is scheduled to be released in March 2021. Having recently issued the “Wanna Feel Good” single, we caught up with Miesha to ask her some questions about the new track, the origins of the act, the Singles EP, and working with Danny Farrant.

You recently released your new single “Wanna Feel Good.” How recently did you write this song and what inspired it lyrically?

Miesha Louie: “I wrote ‘Wanna Feel Good’ maybe two days before our last recording session, so mid/late July. It was the very last song written and recorded for the next album. I was really feeling the pressure that came with the last possible recording session when I wrote it, our producer Leeroy Stagger was literally tearing down his studio and moving provinces when that session ended, so there wouldn’t be any chances to go back later and add anything. Using that feeling I flashed back to another time when I would break that block with a shot of Jamieson and a bike ride out to any rock show, and let the night take me anywhere.”

There’s a classic, fuzzy, garage punk sound to “Wanna Feel Good,” as well as a lot of your other songs. If you had to pick one band from the past that really inspired the sound of Miesha & The Spanks, who would you pick?

“I think Hot Snakes. Or early Bellrays, like their Red, White & Black album. I know, that’s two. I tried writing down just one and my heart pined for the other, and then I tried it the other way and the same thing happened. I don’t know if we truly emulate either of these bands, but when I’m trying to picture a song in the very early stages of writing, I draw from both of these bands. For Hot Snakes it’s that straight ahead pumping drive, and Bellrays it’s that soul mixed with MC5 rock n roll. I love it! We’ve actually had the opportunity to play as support to both these bands and I absolutely became the biggest fan girl both times.”

Going back to the beginnings of you as a duo, first how did you both meet, and secondly, when did you start playing together?

“Sean has been playing in Spanks for five years now, the longest standing drummer, mostly because he is crazy like me and loves to tour and considers himself a professional musician. I had a lot of really rad drummers in the earlier years, but it’s hard to be on the road, especially if you’ve got other big things in your life like careers or partners. Sean has always been in the Calgary music scene, notably for his punk band Jenny which was on DOA’s Joey Shithead’s label. He was the frontman in that band and I actually had no idea he could drum well, I had seen him play drums in like a super fast scrappy punk band, so I thought he was one of those punks who ‘plays drums’ on the side.

We were working together at a diner and I needed a fill in for something, and he offered to help. Then he showed up at jam and knew all of my songs maybe better than they had been played before it was amazing. Fast forward to a swim up bar in Mexico on vacation with our group of friends where he accepted my proposal to join full time. We’ve never looked back!”

There’s a real legacy of garage rock duos that we can obviously look back on over the last two decades. Did you ever consider adding a third official member or were you always set on just being a duo?

“In 2011 I had a friend add organ to our album Gods Of Love, and it was rad, and a lot of fun, so he joined the band. But it didn’t work out, and I think it sort of soured the experience. But when I started the band, a two-piece was never the intention. I was trying to just start a band of my own design, where the members could be moving parts but it was mine and I could tour and write and release as I saw fit. Steve (Elaschuk) and Brendan (Tincher) from The Neckers helped me get it started playing bass and drums on the first EP back in 2008, but when I had my first show booked Steve wasn’t available so we decided to do it as two. I liked it!

I will say that it took years for me to actually achieve that full sound I was after as a two-piece, and that came from watching other two pieces live and on YouTube, and a lot of experimentation with tuning, guitar strings, amps, and pedals. For a long time in the beginning, I think it was missing something, and I forgive all those bass boys who came up to me after a show saying we need bass. But I’m not so forgiving now. I’m pretty proud of our big sound.”

I understand that you’ve been hard at work recently, working in Lethbridge, Alberta on your upcoming Singles EP. How far along are you with the EP? Are you done recording yet or is there still a ways to go?

“The tracking is done, we wrapped up at the end of July, after starting in March and having a big COVID-19 hiatus in the middle. We’re still going back and forth with some mixes, but recording is all done.”

You have March listed as the release date for Singles. Are you still working towards releasing it in March? Or could things get pushed back as a result of the pandemic?

“I mean we would love to accompany the record release with a full tour, which is why I picked March; I was optimistic we would be there by then. I don’t know that I still am, but either way we are looking at March. I guess anything could happen, but we want to get this thing out there. If we keep waiting for proper shows to make a comeback, it could be a 2022 release, and we don’t want to wait that long.”

I’m curious as to why you chose Lethbridge as the location to record the EP. What specifically led you to recording the EP here?

“Lethbridge was the home the Rebeltone Ranch, Leeroy Stagger’s recording studio. We were the very last band to record there before he packed it up and moved to Victoria. Today Leeroy Stagger is more on the roots and Americana side of rock n’ roll, and most of what he records is in the same vein, but he used to play punk, so we knew he would get our sound. We wanted that perspective producing our new songs, and we wanted to make some noise in the gorgeous warm studio he built. The first session was a trial run to see if it was a fit, and we loved it, so we waited it out to get back in there.”

How far back do the songs that will be on Singles go? When would you say you really buckled down on songwriting for this EP?

“I started during my twins pregnancy in 2019, but it was slow moving and a lot of it didn’t make the cut. I thought I had all this time to write while I grew too big to do much of anything else, but my brain did not agree, and what little I could come up with was just ok. So even though I’d been ‘working on’ this EP for nearly a year, things didn’t start really moving until maybe January this year, and then once Canada shut down, I rewrote most of what we had planned, and added new songs to the mix. Most of what you’ll hear on the EP came really close to the deadline.”

I wanted to ask you about your 2018 album Girls Girls Girls. Hearing that title obviously makes you think of the classic Motley Crue song. Is there any relationship between the song and the title of your album?

“The album was called Girls Girls Girls before I started writing it, before we wrote the title track even. I finally had a female bandmate, I was surrounded by the raddest girls in my city, and things were feeling like ‘yes, Girls! Girls! Girls!’ Obviously ‘Girls Girls Girls’ was branded by Motley Crue, even Beastie Boys, but we were taking it back. Our girls were wild too, but more like a pack of wolves, and less like body shots.”

I also wanted to ask you about working with Danny Farrant of The Buzzcocks who helped produce Girls Girls Girls. How did you get acquainted with Danny and how did he end up producing the album?

“I met Danny backstage at Sled Island in 2011! I ended up tour guiding him around the festival/city, he came to our showcase, and a few months later he hired me to do some session work for him. Danny and Paul Rawson (who also produced Girls Girls Girls) write and record music for film and TV from Paul’s studio in Brighton, UK. For years I did songs for them, some making it into Vampire Diaries, Being Human, Shameless, until my engineer suggested I ask him to do an album. We did (the) Stranger EP with them producing remotely from the UK and us recording in Calgary, and were pretty stoked, so we decided to head out to the UK and do an album.”

It’s so hard right now to answer what’s next, but what do you have planned between now and when Singles is released?

“We’ll keep releasing singles from the EP, accompanied by music videos, until we can play live again. We have a few recorded performances in the works, but for a loud band to do this any good the production has to be really good, so it’s not the kind of thing we’ll be doing a lot of. As a touring band, this is all a big adjustment. It’s hard to know what to do with ourselves. This EP isn’t even finished in production and it feels like all we can do sometimes is write more music, so don’t be surprised if another album creeps up behind the release of Singles EP.” 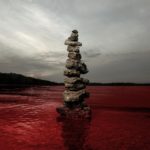 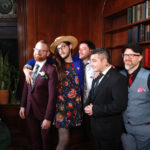