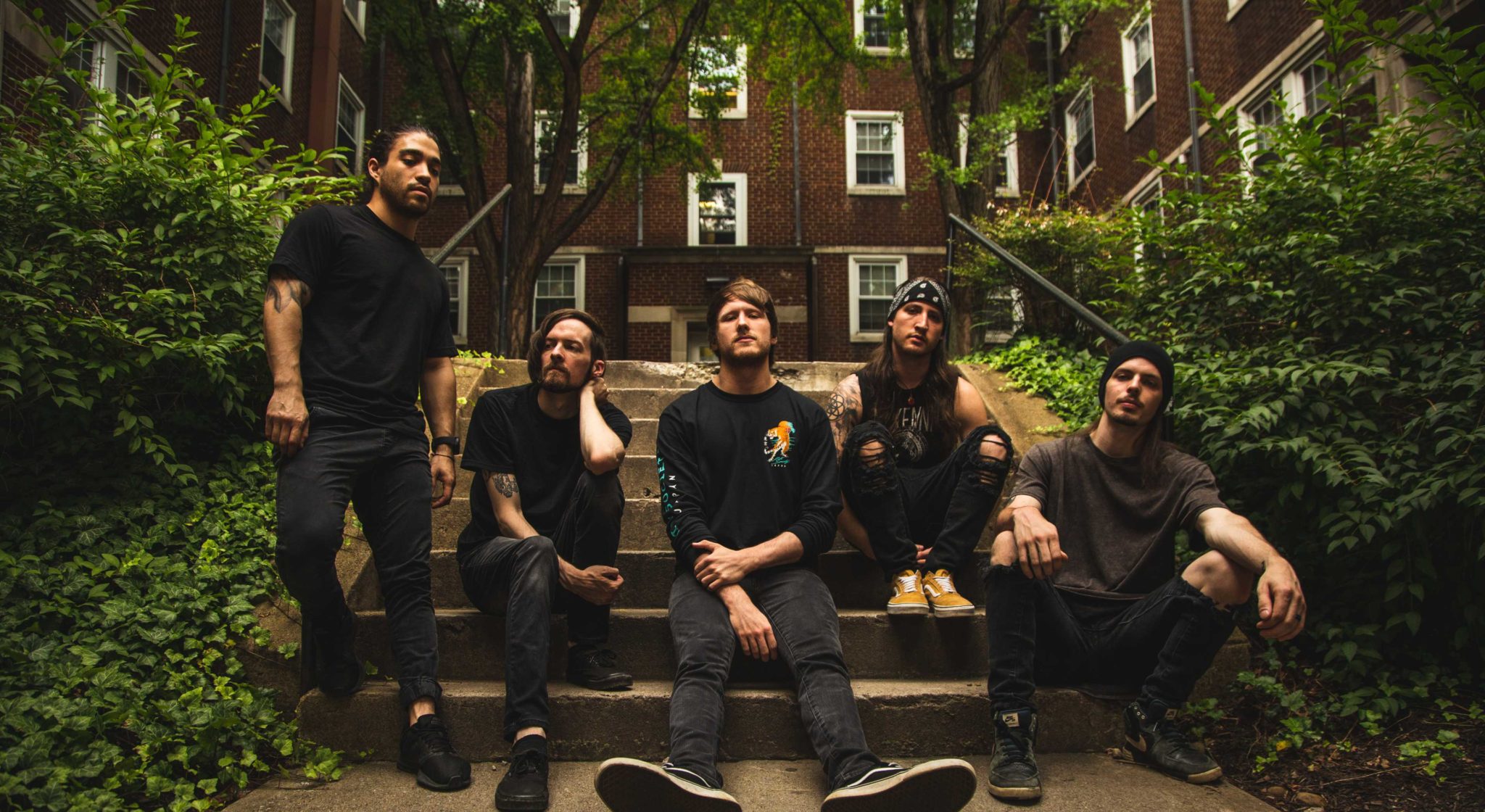 Curses are a West Virginian metalcore quintet who prop up dual vocalists – one clean, one guttural – with savvy musicality infused with torque-gun-force and meticulous precision. Brando Casto and Eli Fry run the vocal show, while the band’s foundation is drafted, framed, and constructed by the instrumental work of Davey Nicewander (guitar), Michael Olivares (bass), and Shane Cyrus (drums). The group’s second full-length just dropped on August 7th via SharpTone Records and introduces a maturation and personalization developed in the years since Curses formed in 2017. Chapter II: Bloom is the next step for this standout unit, and, for both the group and their erupting fanbase, it’s a cause for celebration.

To help kickstart the party, Curses are joining us for a thoughtful and fastidious breakdown – a calling card of their music and communicative tendencies, it seems – of the ten tracks that make up Chapter II: Bloom. Even if the music isn’t your cup of tea, genre or otherwise, you can’t help but appreciate the care that Curses bring to their craft, as evident in the work below.

“‘Almost Heaven’ describes the tragic reality of the ongoing opioid epidemic in West Virginia, the severity of which we’ve witnessed in our personal lives. We chose the title because West Virginia is such a beautiful and extraordinary place that we hold close to our hearts and consider home; yet, it’s been ravaged by poverty, widespread destruction of the environment in the name of corporate greed, political corruption, and the highest rate of drug overdose deaths in the country. Growing up and watching these things unfold as we’ve learned more about the world has, at times, left us feeling hopeless and this song connects those feelings to the very circumstances faced by a place we love.”

“The title being a reference to Aldous Huxley’s The Doors of Perception, this song is about coming to terms with the transient nature of ourselves and the world around us, while acknowledging our oftentimes restricted awareness of this nature. The Door is one’s glimpse beyond mankind’s limited understanding of this reality, while The Wall is the collection of things we’ve distracted or closed ourselves off with. The beauty that lies within this impermanence is a crucial part of what drives us as musicians and as individuals. Our greatest strength is tied directly to our inescapable ending.”

“The common translation for Wu Wei is roughly ‘doing nothing’ or ‘non-doing,’ but because this is a phrase that doesn’t fully translate to English, a more accurate definition would be ‘not forcing’ or ‘effortless action.’ This song highlights the story of an individual having an experience that allows them to clearly see the deeply interwoven relationship between their sense of self and their idea of external events. Recognizing this relationship, a flow between self and other is realized.”

“‘Toska’ is basically about realizing the inevitable end of something changing around you so drastically, that it leaves you feeling helpless. You want to fight that wave and feeling, only to realize that letting go of that very wave is the next step into a new, better life. Specifically, the song explores letting go of someone you thought you’d be with forever. Toska is a Russian word describing an unfathomable sadness. The song ends with the acceptance of what is and the decision to move on. Sometimes the best way out is straight through.”

“‘Amethyst’ is about the loss of one’s maternal creator. It explores the immense beauty that can be found within the throes of grief and connects it to the sublime reality of the natural world. Even after death, our loved ones continue to live within us through the memories we’ve created, the everpresent love we feel, and the perspectives we’ve inherited. The crushing weight of grief is consistently defied by the very love that facilitated it. This song was written as a tribute to Brandon and Davey’s mothers.

“‘Wetiko’ paints a picture of the relationship between unchecked materialism, consumerism, and greed along with their impact on one’s sense of self. Self-doubt and fear are used to fuel unsustainable growth and an obsession with hollow numbers such as profits and earnings. This obsession creates a complete disconnect between the true interrelation of self and other, which leads to widespread damage to individuals and society as a whole. Wetiko is a Native American word describing a sickness of selfishness that creates total disregard for the wellbeing of others.”

“This one is essentially about being aware of one’s existence and understanding the mortality of one’s own physical body. You may find an inspirational path to take along this journey. Even knowing that it doesn’t make much sense to take it, you take it anyway. It highlights the danger in choices and chance, yet the reward for taking these chances will grant clarity within the existence one represents. Just breathe.”

“As an instrumental, ‘Ascent’ simply builds and builds to describe the increasing intensity of one’s passion for purpose. It expresses an upwelling of inspiration and motivation that can lead to one’s ‘blooming,’ so to speak.”

“‘Follow the Fire’ is about endlessly pursuing one’s dreams. The ‘fire’ is the passion to push on regardless of hardship. The song describes following this path of inspiration and rejection of society’s passive conditioning that leads to the ultimate realization that we are all one. This glimpse into the absolute truth is what can be said to lie on the other side of ‘The Door in the Wall.’ Seeing god in the eyes of another person is part of walking through that door.”

“‘Welcome Back’ ties everything together at the end by explaining that these lessons and realizations one has endured trauma or loss in order to reach, lay within all along. Yet, it takes overcoming and experiencing these things to get the message. It’s a welcoming handshake to the reality that we are all infinitely interwoven into one another and everything else in the world around us, that self and other are simply two sides of the same coin, and that this is all a continuous, natural process of birth and death that is indescribably beautiful.”