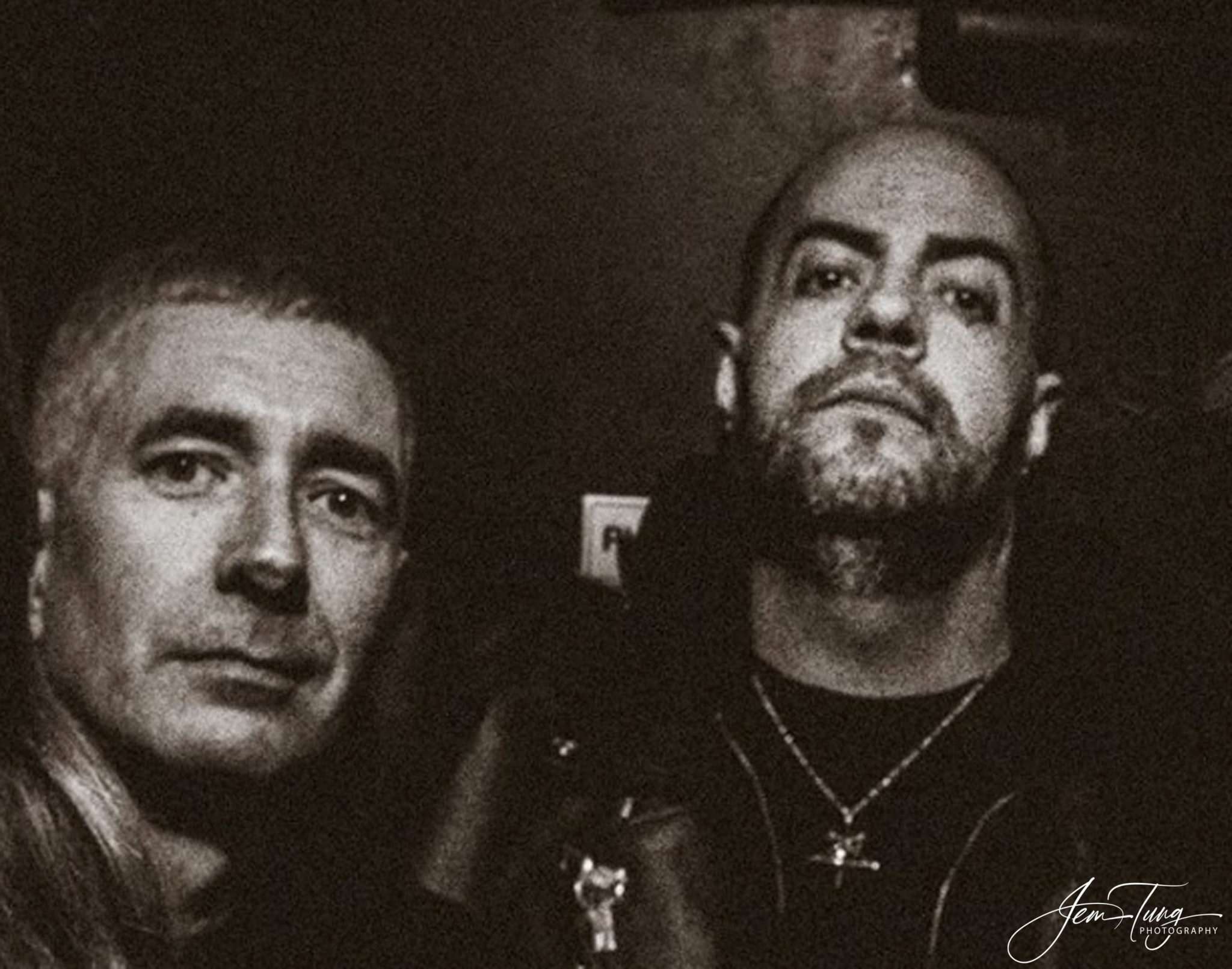 Hey there, hosers and hoseheads! How about some Canadian metal rooted in the sounds of our colonizing Commonwealth overlords for y’all? Featuring Rob “Mule” Hughes on all instrumentation and vocalist Kyle Harcott, both of Vancouver speed metal mongers Hexripper, Dirty Vicar is the product of the collision of Coronavirus lockdown-induced boredom and the unassailable creative spirit of heavy metal’s most valiant warriors.

And, as one might expect by their settled upon moniker, there’s a healthy amount of NWOBHM worship at play on Plague of Demons, the duo’s four-song debut EP which went from inception to realization in a matter of two months. This is indicative of the value of putting one’s free time to good use, what can be accomplished if you turn off Netflix once in a while and provides a microcosmic look into how much music could be flooding the market if your favourite musicians didn’t ever have jobs to go to. We tracked down Mule via email for an introduction to the band for which brevity is a virtue.

Seeing as this is your first time ‘round these parts, or pretty much any parts, for that matter, can you give a brief history of the band? What’s the relationship between Hexripper and Dirty Vicar? Did the former break up or are the two entities running concurrently?

Rob “Mule” Hughes: “The history of the band is brief indeed! None of it, no music, no band, had existed until April of 2020. During the COVID lockdown, Hexripper took a break from rehearsing. I started recording what became Dirty Vicar’s Plague of Demons EP in April and we had it on Bandcamp on June 14th. Hexripper is still going strong; we hope to have our album out later this year. Dirty Vicar is pretty much a side project.”

How would you characterize what you’re doing in Dirty Vicar? What is the goal with this band?

“I’d say it’s old school metal informed by the NWOBHM and Banzai Records. The aim is to apply my somewhat crude musical abilities to music that combines the imaginative bludgeon of early Voivod and Celtic Frost with some of the straight-up songwriting power of Tank, Holocaust and Trespass. The goal is purely to have fun, challenge ourselves and entertain a few listeners. I only make music to amuse myself and a couple friends, so if anybody else gets on board with it, then great!”

How long did it take to write Plague of Demons and how difficult was it for you in writing the music yourself instead of having a room full of dudes to bounce ideas off of? How far back does the material on the EP go and was it written from scratch?

“We coughed up Plague of Demons over two months, mid-April to mid-June. I’m totally used to working as a self-contained, self-indulgent unit. I started my lonesome four-tracking exploits close to 30 years ago! Although I work with Logic now, I still just see it as a fancy sort of four-track. The four songs on Plague of Demons were all written from scratch. I live close to our jam spot, so during lockdown, I’d go in and play drums by myself. I’m always recording and making music at home, so I saw these solo stints as an opportunity to come up with drum tracks to do something with later.

One weekend I decided to write a song around a few drum parts I’d laid down and that became ‘Graveyard of Pint Pots.’ I sent the rough outline to Kyle and he was keen to get involved on vocals. That kicked it off, basically. Lather, rinse, repeat: I bashed out more drum tracks over the next few weeks, wrote more riffs to go with them and we had an EP. I kept sending demo after demo to Kyle, ‘Hey, guess what? I’ve written another one!’ He was a total superstar, coming into our space and recording vocals in two sessions as the final piece of the puzzle.”

Was there a particular motivating moment that had you saying, “We’re going to do this ourselves, full band be damned!?”

“I think as soon as we heard what we had with ‘Graveyard…’ we were all in. It had a vibe to it that I needed to pursue. I had months of quarantine ahead, a hard drive full of drum tracks, a puny Peavey combo and a fully cranked HM-2 pedal, so it was time to do something constructive to salvage our mutual sanity.”

With that in mind, had you ever written or recorded music in this way before? What were some of the challenges you encountered along the way? What was most surprising and/or frustrating about doing things as a duo as opposed to a traditional band set-up?

“I have decades of one-man-band jack-assery behind me. Stuff on cassettes, MiniDiscs, CD-Rs, MySpace, Bandcamp… Some of it is heavy, some of it is not, some of it is ‘I don’t know what the fuck this is supposed to be.’ The most surprising thing was how easily and painlessly this all happened. A lot of it I credit to Kyle, who was a stellar collaborator. In Hexripper, we each do our bit, I don’t write any Hexripper music, but I sometimes help out with song structure. Kyle writes lyrics for every new Hexripper song. I haven’t worked one-on-one with him before and it was a total joy.”

“This is where I reveal the true level of my geekery. I appropriated the title from the name of a voltage controlled oscillator module designed by NonlinearCircuits (a guy in Australia who is a synth genius). I gather he borrowed the name from a novel by Keith Laumer. The book looks amazing; I need to read it.”

With the experience behind you, can you see Dirty Vicar continuing like this in the future or do you eventually want to flesh it out into a full band?

“I definitely want to continue Dirty Vicar as a recording project. I’m continuing to write Dirty Vicar material—I found some old riffs and demos in the vault, so I think the writing process will be more intentional from now on. I don’t see us becoming a full band. Me playing guitar in front of people would be a horrible thing to witness for all involved!”