One of the biggest heavy metal bands of the twenty-first century, Lamb of God has been busy supporting Slayer on their massive final tour, which partly explains the five-year wait for their eighth studio effort. This recording marks a new era for the group since fans were shocked last year by the announcement of Chris Adler’s departure, his signature drumming such an integral part of LoG’s sound. But the album’s self-titled and familiar artwork suggests that the band has no intention of deviating from its formula. And the singles released so far have sent a clear message that LoG is staying on-brand, with their distinct Southern groove that combines thrashy energy and a unique tone of angst.

After the brooding introduction to first track “Memento Mori,” a trademark riff kicks in, announcing that this is unmistakeably Lamb of God at their most energetic and urgent. The interplay between guitarists Mark Morton and Willie Adler provides the usual technical riffing, haunting sirens, massive half-speed breakdowns and driving insistence that has defined Lamb Of God’s contribution to modern metal. Production from long-term collaborator Josh Wilbur (Trivium, Megadeth, Korn) allows all the instruments to shine – the bass-playing is massive, for example – and stays just on the right side of too-slick, so essential for a band with Lamb of God’s punk roots. Musically, there are no huge surprises, and the album is almost entirely up-tempo. Stand-out tracks are “Checkmate,” whose groove is reminiscent of the group’s 2004 classic “Laid To Rest,” the haunting “Resurrection Man,” which cleverly links voodoo with capitalism, and “Gears,” which contains the most technical speed-playing on the recording.

Lamb Of God has always been very strong lyrically; Randy Blythe is an extremely talented writer and his songs are politically-charged, passionate and poetic. With the US political landscape more turbulent than ever, he has been spoilt for thematic choice, and so brilliant is the writing that it’s difficult to pick just one or two examples. “On The Hook” is as profound an analysis of America’s opiates addiction as any: “Narcotic economics for the miner’s sons/The seams went bust so long ago with nowhere else to turn/ Strip mine the veins, drill the abscess dry/ Incentives for the architects of their genocide.”

He writes about water pollution in “Poison Dream,” oil pipelines in “Routes,” and his phrase “is this the new abnormal” is incredibly prophetic, having taken on a new meaning for COVID times. He doesn’t let the poetry get in the way of a massive lyrical hook – for example, the anthemic “repeat, echo, refrain” – or negativity get in the way of a call to arms: “Will you pray, or will you fight?”

While Lamb Of God has never gone down the route of clean-sung metalcore choruses, Blythe is not afraid to use clean vocals and spoken word where appropriate to deliver a message. He also brings in guest vocalists Jamey Jasta (Hatebreed) and Chuck Billy (Testament) on two tracks, and while this provides some sonic variety, it is Blythe’s own exhilarating vocal range that continues to be one of the most exciting aspects of the band’s music.

New drummer Art Cruz (formerly of Winds of Plague, Prong) is probably bored to death of hearing that he has big shoes to fill, but it would be remiss not to mention his performance. You can hear the stylistic difference, but that’s no criticism of either drummer, only that Cruz has been allowed to put his own stamp on a well-established sound, adding his own intuitive energy.

Lamb of God didn’t take any major risks with this album, and perhaps it doesn’t have any anthems as huge as “Redneck” or as poignant as “512.” Maybe this belies a subconscious carefulness when faced with the challenge of their first line-up change in well over twenty years. But it also shows a supreme confidence in the natural vehement energy and technicality of their sound. If it ain’t broke, don’t fix it, and Lamb Of God have proved that they have not been broken by the loss of Chris Adler. Lamb Of God is a statement of purpose and an amalgam of all the tricks in their arsenal, delivering 10 massive additions to their catalogue. 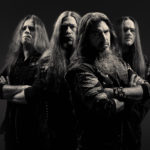 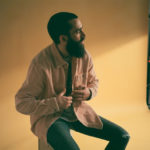