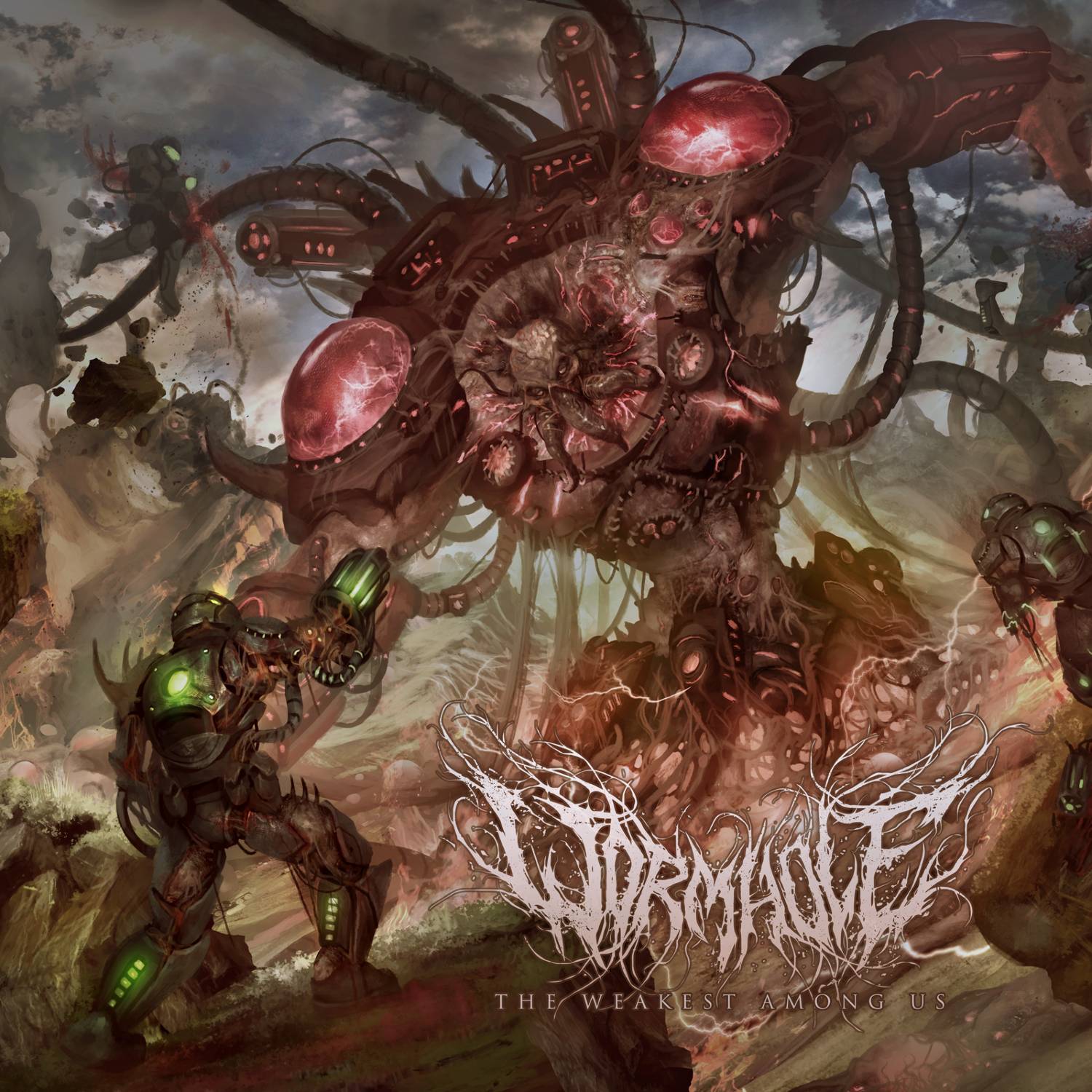 Wormhole – “The Weakest Among Us” [Album Review]

I somehow missed the hype for Genesis, the 2016 debut album from tech death/slam bruisers Wormhole. Listening to it now, it was a fun-packed, fairly original beginning for the band that showed oodles of promise and had its own personality, not an easy goal to achieve within the limited genre boundaries, and I was keen to see where they landed up with their new platter, The Weakest Among Us. With so many bands swamping this extreme area, the bar has naturally been raised and it takes more than a half-hour of brutal breakdowns, pig squeals, and finger-twisting solos to impress anymore, something that top-tier acts like Cattle Decapitation, Wormed, and Vulvodynia have risen above and created their own particular niche.

The Weakest Among Us, unfortunately, takes a step back from its quirky, gripping predecessor and sits squarely in a comfortable, generic area inhabited by several of their peers. The slams and noodley leads are all in place, pushed to the forefront by the meticulous blasts, deadly bass, and furious vocals, but it all gets very samey and a bit much, even within its meagre 28 minutes run-time. This is not to say that it doesn’t entertain, because if you’re looking for sonic brutality with Rings Of Saturn extraterrestrial melodies and adrenaline, this has it in spades. But if you’re a long-time fan of brutal death metal and are looking for new music that expands the distortion-drenched horizon, it feels as though the band, although highly skilled, haven’t pushed as far enough as they could have.

Check out the extreme promo video for “Quad MB” here:

As with Genesis, the vocals are adequate but lack the dynamics needed to make them essential, so much so that my ears tended to push them into the background as the album progressed. The guitars play off each other in their endless streams of riffs and blistering solos which, as astounding as they are, tend to satisfy the listener’s inner-shredder but don’t add much to the songs. With such a hot blast of intense music, the focus should be on making the tunes as memorable as possible to keep you coming back for repeated listens, something that’s sadly lacking here (even with the cool Spongebob Squarepants sample, something so unexpected and unusual that I couldn’t help but burst out laughing). The addition of a live drummer this time around (the debut had programmed drums) gives the music a far more organic sound and I really enjoyed the solid rhythm foundation laid down by drummer Matt Tillett and guest bassist Alex Weber – they achieve a spacious backbone for the other players and still drop jaws with their individual skills, and are easily the highlights on the record.

The production is balanced enough to accept the extremity from the different instruments, but it does lie a little flat and clinical and ultimately overshadows the music’s human roots. For me, outside of a band that aim for precision and robotic potency like Artificial Brain, I want to hear the elasticity of the bass, the imperfections in the percussion attack, the artists laid bare and open. As it is, the detached sound of the album robs it of fully formed character and dilutes the excitement so eager to break through.

Don’t get me wrong – there’s some great playing and the band are as tight as tight can get, there’s no shortage of passionate ferocity, and fans of pounding slabs of bludgeoning riffs will find much to feed on here, but Wormhole have the chops and creativity to take themselves to another level and I look forward to watching them evolve. The Weakest Among Us is an attack on the senses that, whilst not breaking any boundaries, still swings like an angry gorilla and hurts like it should.

The Weakest Among Us Track Listing: