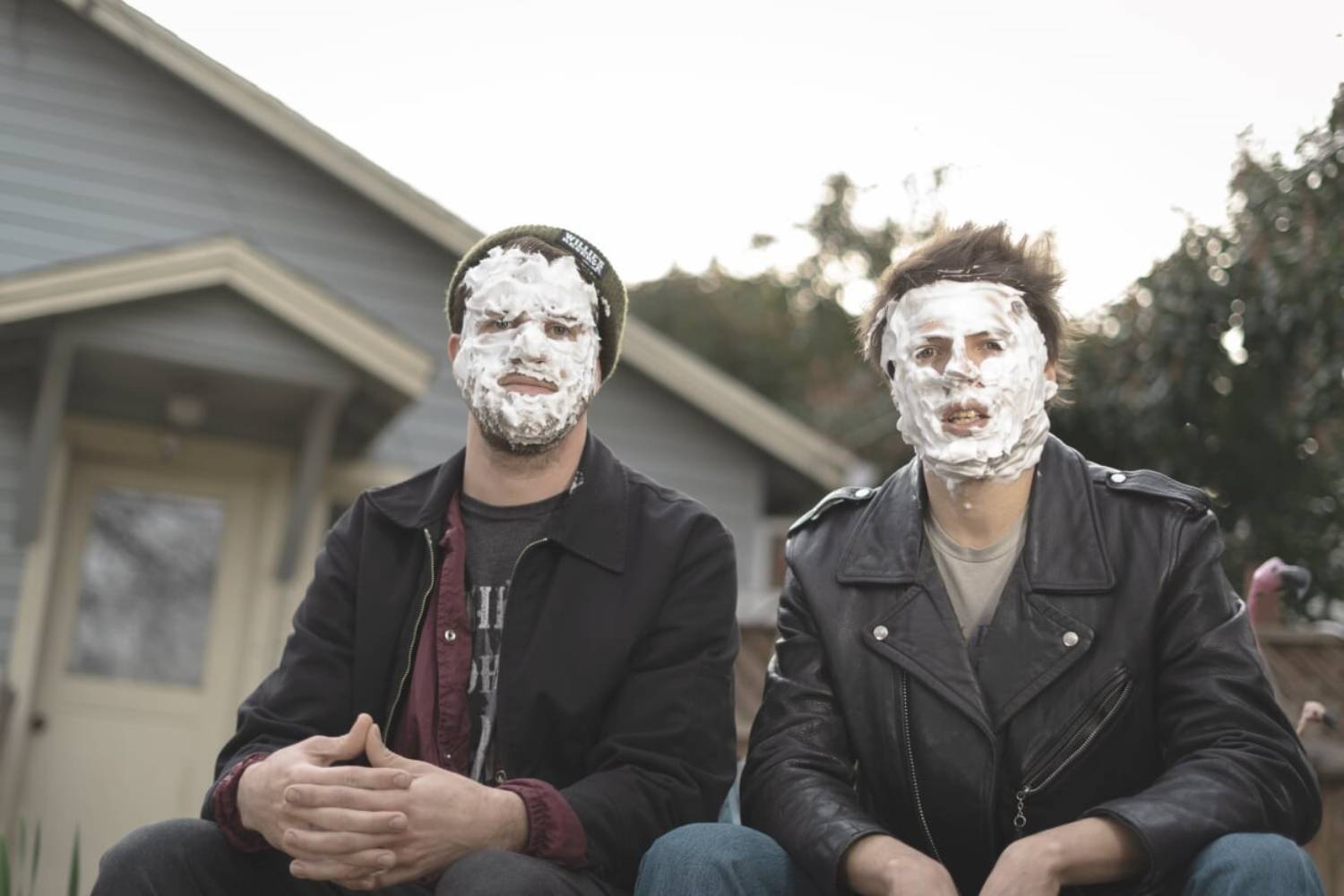 Don’t be Depressed + Distressed, Beehive ha arrived! Today we’re stoked to premiere this duo’s brand new seven-song debut EP before its release on September 6th via Jester Records. Stream the whole shebang below, and get your pre-on now via the group’s Bandcamp page. These guys are the masters of the one-take approach; when they hit the studio to officially record the EP, they recorded all the songs live in one take onto 1/2″ tape. There was no screwing around with this one. The dudes meant business and their approach has paid off in dividends as evidenced by the pummeling collection of songs.

Composed of singer and guitarist Jake Sprecher and bassist Bud Amenti, Beehive formed only at the beginning of this year. In their short time together, the twosome has been hitting the West Coast touring scene as hard as they can to spread the word about both themselves and their new EP. Sprecher has played with a ton of other bands, including Terry Malts (SF), Smokescreens (LA), and Business of Dreams (LA), who are all signed to Slumberland Records, while Amenti has previously played with Shutups.

It’s all about the intensity with this duo and they’re proving it thus far to be a winning formula. To elaborate more on the release of Depressed + Distressed, singer and guitarist Jake Sprecher joins us to answer a few questions about the writing of the EP, the motivations behind it and he elaborates more on this “one-take” approach that they have adopted with their songwriting.

No need to worry about getting Depressed + Distressed while listening to Beehive’s new EP ‘cause it’s rad!:

I really like the classic kind of lo-fi punk vibe that’s laced through your debut Depressed + Distressed. What bands or artists would you say directly served as an influence through the recording of this EP?

Jake Sprecher: “More than anything, I would say punk of the late ‘70s and early ‘80s, be it hardcore, weirdo stuff like Flipper, or just straight-ahead rock n’ roll Ramones. There’s also plenty of contemporary influence in there from bands like the Spits, or somebody obscure and amazing like Glasgow’s Junto Club, who are closer to lo-fi disco and Suicide. Speaking of lo-fi disco, I’d be remiss not to mention the label Italians Do It Better. I’ve gotten really into their roster over the last few years, and pretty much everything they put out could be a reference point to our use of an analog drum machine for this project.”

I also found the under-produced, bold, in-your-face element to the EP particularly refreshing, especially in an age where there is such an emphasis on over-production. What motivated you to record Depressed + Distressed in this particular way?

Sprecher: “I really feel like this band is best felt and heard in the livest way possible. Part of the deal for us is never stopping the drum machine, so there’s no true break between songs. That would be another direct influence from some of the punk listed above. I’m also totally enamoured by recording to tape in any capacity, which naturally gives off that dirty warmth. And I’m not saying for a second that we’re reinventing the wheel with that ideal, lots of bands record to tape. I’m just totally stimulated and inspired by it 100 percent of the time. I think using my TASCAM 38 brought out the best in both myself and Bud in the process.”

If I’m not mistaken, you recorded the EP in one take. Did you ever feel that you should do a second take, depending on how the first turned out or did you just take the attitude of “whatever comes out, comes out and that’s the way it’s going to be?”

Sprecher: “We hadn’t planned on one-take-or-bust at all. But we were well-rehearsed and just so happened to nail that first 23-minute shot, and we knew it. So it’s like, why overthink? If a first take has the vibe, be happy! It’s actually really gratifying to let go of the oft-obsessive element of recording if you feel genuinely contented with how something turned out on the quickness. I also want to give a shout-out to our engineer, Dave Elke. He runs the recording arts program out at Butte College, and part of the reason we could feel so good about that first take was because he had everything supremely dialled by the time we pressed record.”

Depressed + Distressed will be released on September 6th via Jester Records. View the album artwork: 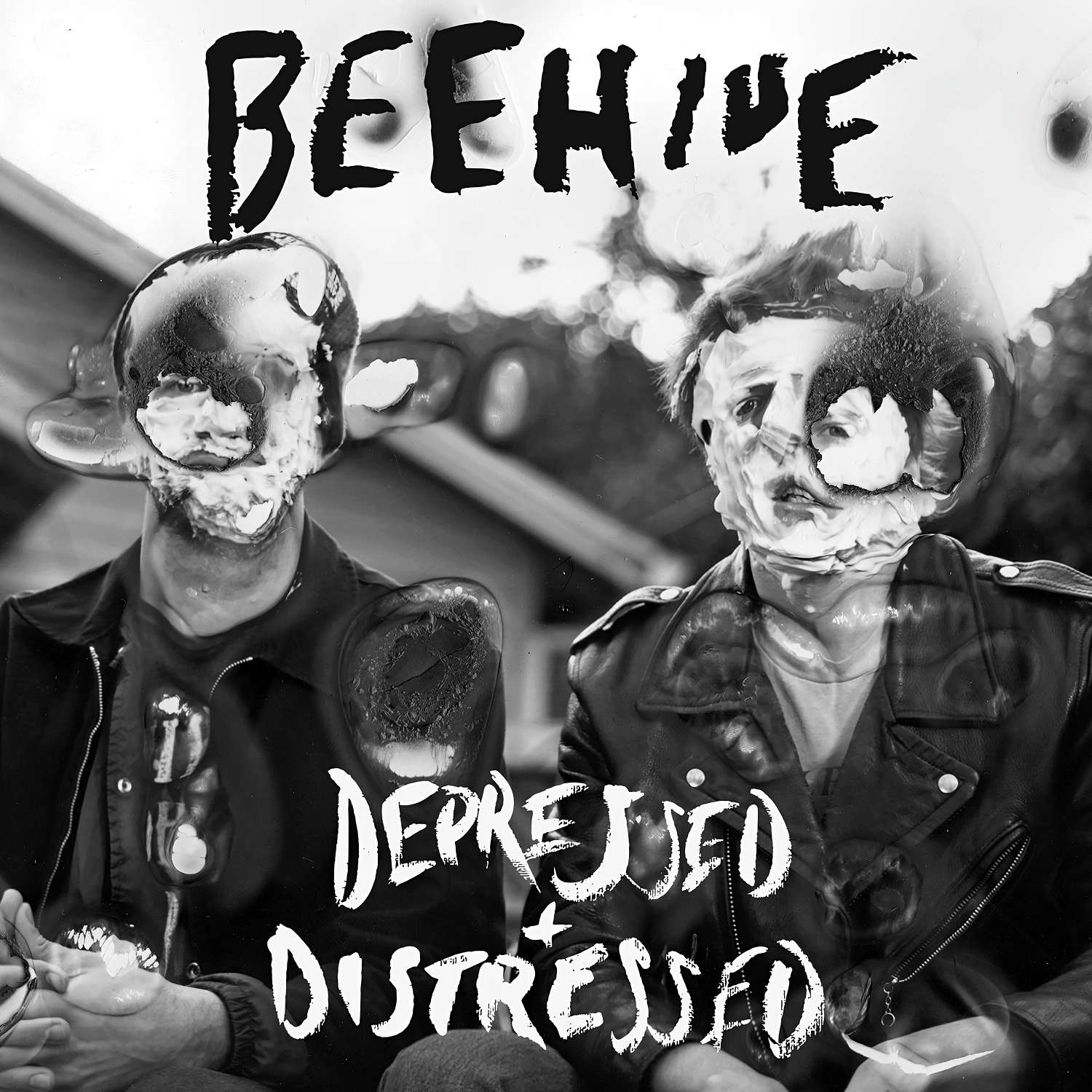 Do you plan on maintaining the one-take approach on future recordings? Or do you see a day where you may invest more time into recording and production?

Sprecher: “I can definitely foresee variance in our mode and method, but the core of that live and lo-fi ethos will stay the same. We’ve already got enough material for another EP, and I’m excited to be adding a Roland RE-101 Space Echo into the mix for analog effects. I can’t wait to get into the studio with that thing. Talk about hypnotic!”

You guys have only been together now for about six or seven months. How quickly after creating Beehive were you able to actually write and then record Depressed + Distressed?

Sprecher: “We’d only played like two or three shows when we recorded the EP in February. But that first batch of songs already felt super locked in, and there was no reason to sit around and wait. This is also a good chance to mention what a joy it is playing with my bandmate, Bud. He’s one of the most intuitive musicians I’ve ever known, and it’s hard for me to imagine everything coming together so quickly with anyone else on bass. I feel really, really fortunate to be playing with him.”