Mark Kloeppel is a busy man. And busy may be an understatement. Mark has been the vocalist and rhythm guitarist of death metal/grindcore group Misery Index since 2005 and, in that time, the group has risen to the heights of its genre. But, aside from all that rock/metal band stuff, Mark has also got a whole bunch of other endeavours, including managing Extreme Music Group, a management organization for musical artists, and being a husband and a father to two children.

Even with all that, Misery Index is about to release their sixth studio record, Rituals of Power (pre-order a copy here), on March 8th via Season of Mist, an album that is quite direct in its political and societal commentary. Even with all of this going on, Mark took some time to answer questions about the new album, Extreme Music Group, not to mention he included some very insightful political commentary.

Alright Mark, so the band’s new album Rituals of Power is just about to be released, making it nearly five years since the release of The Killing Gods. If you could pick out one thing that has changed about you as a musician or a songwriter in the last five years, what would that be?
Mark Kloeppel: Well, I started doing lead guitar playing in Scour a couple of years ago, and, since I’m more of a stylized solo and riff-oriented kind of dude, I really work for the shred. But, I just play really aggressively overall, which does not make very good economy of energy. But, whatever, you know? I’d rather each note be played with feeling, than for it to be easy. It just sounds like you really mean it that way. And, not to cross-pollinate here too much, but when I heard the impactful simplicity that my good friend Derek Engemann put into Scour, it had me reassessing my writing in Misery Index as well.

The songs on Rituals, as aggressive and busy-sounding as they are, have a lot more breathing room in them than you hear on first listen. That’s the impactful simplicity thing I learned from the other experience. Overall, though, I think I’ve reached a point where I’ve perfected my writing processes and how I work with others. I don’t put too much in a song anymore. I don’t put a death grip on the creative process anymore. There’s a lot more call and response within and surrounding the music now, and I think you actually hear that dynamic in this latest Misery Index record.

“The Choir Invisible” is the latest track to be released from Rituals of Power. Check out the lyric video!

We always love to focus on the fun and humorous side of music to change things up a little bit. What’s a funny inside fact or story you can tell us about the process that went on behind the making of this record?
Kloeppel: Darin and Adam had made a last minute tempo adjustment to a riff in the title track, and, since I wasn’t there to track it in, they just hastily stretched the audio to fit. But, I mean, it was done REALLY poorly, and I didn’t hear it before it went down to Erik Rutan’s place for Adam to track drums.

Dude… don’t tell him this, but Erik is an idol for me. He’s the best, the most brutal, the most down-to-earth, and most experienced in death metal. He was in Morbid Angel in the hay day. Enough said. Beast dude. So, they are down there tracking, they get to this part, and Erik actually calls me (and says), “what’s up with these guitar tracks, bro? They’re awful!” I told him what happened, but he wasn’t having it. Just kept giving me shit. I love that man. And listen to those drums he recorded! They are on fire!

You have a pretty vicious, death metal growl in many of the songs you perform. How do you keep your voice healthy and in top shape when you’re playing shows back to back nights? Are there days that you just won’t talk to anyone?
Kloeppel: It just depends how I’m feeling. I listen to my body. Some tours I’ve been impermeable. Others, I’ve had to monitor how much I was speaking during the day, etc… There are a lot of techniques out there, but they all start with listening to your body.

Misery Index’s latest album, Rituals of Power, is due out on March 8th via Season of Mist! 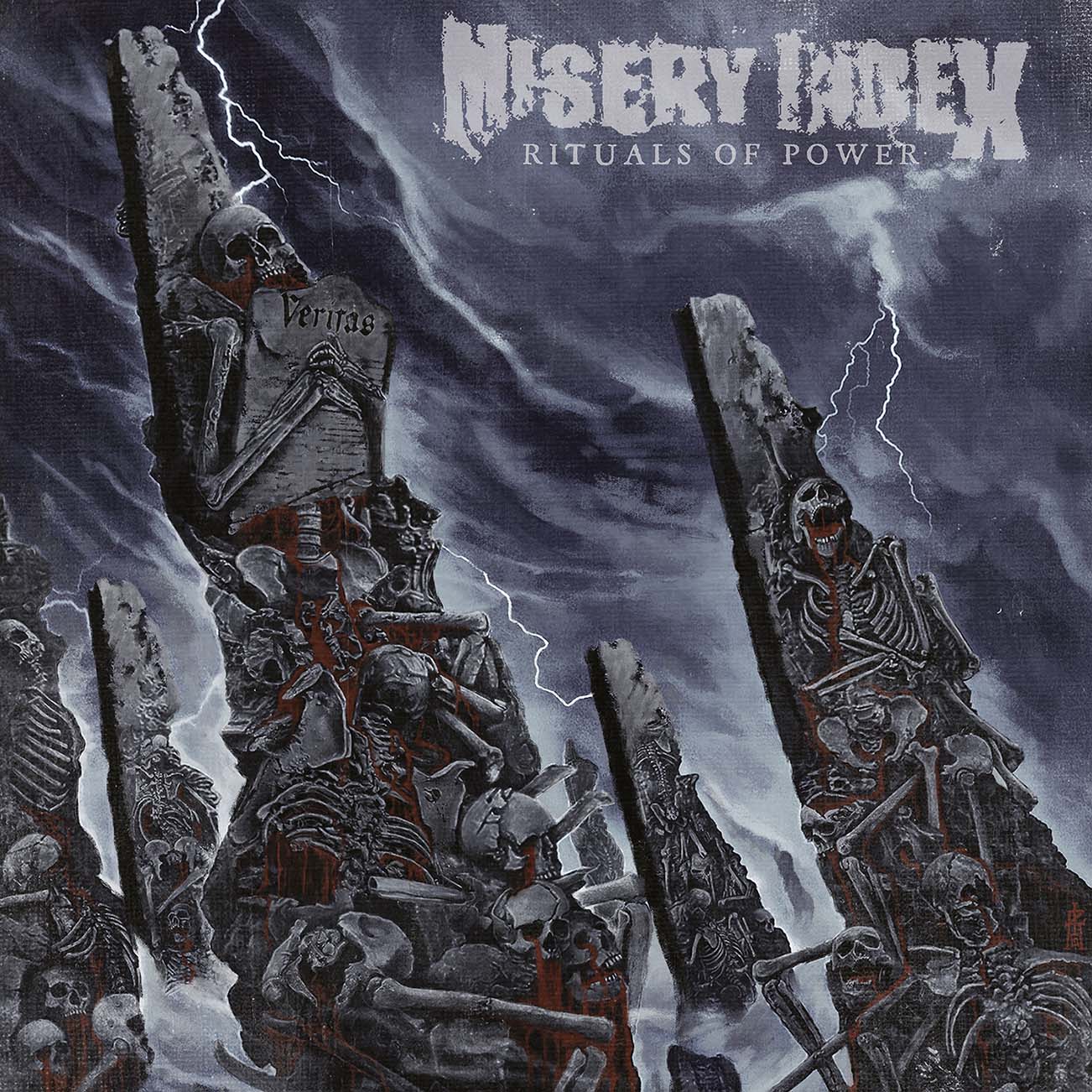 If anyone has even been a partial fan of Misery Index, they would know that the band is fairly political and very left-leaning in your views which is a prevalent theme throughout Rituals of Power. What would you say is the primary source of your political “fire?”
Kloeppel: First off, label us as they might, and associate our views as they might, we don’t really lean or prescribe to the left/right dichotomy. That’s a simplified version of reality, and frankly a false binary… especially in terms of lived experience. Life is more complex than that but also has a nonbinary center. Meaning, life is not divided into left and right outright. People are not “black” or “white” outright. These are imposed categories, false, and oversimplified constructs, and they are being played to keep populations under thumb.

That dynamic, and the very sad in-fighting and self-categorizing is what keeps my fire lit. The prison doesn’t need to be built because they are imprisoning themselves. We aimed to call out this dynamic on this record on all levels, even at the every day and very uncomfortable in-your-face social level, a festering echo chamber pitted against itself.

Tell us more about some of the left-leaning themes that we hear on Rituals of Power. We’d love to gain some insight into the lyrical ideas covered on this album. I’m not sure how closely you follow international politics, but what country specifically would you look towards as an example of a nation that is perhaps doing things at least close to the “right” way?
Kloeppel: It’s hard to say since they all exist in a less than perfect historical context. As an example, some of the European countries with these great social programs that those of democratic orientation in the United States would like to see emulated, sort of turn a blind eye to the imperialism that generated a lot of that wealth. Also, note that the programs aren’t extended to anyone the world over. It’s for the country or “their people.” So there is an element of tribalism that is being upheld even in those presumably sunny scenarios.

At any rate, in a global capitalist regime, the actual misery Index seems to be a fairly good indicator of favorable conditions. But there really is no making things “right.” One can organize and provoke incremental change as they see fit and they should! But there will be push back. Hopefully, well intentioned anti-oppression movements are maintained. Maybe they will be dismantled by other forces at some point, and then something else catches popularity and another positive movement arises against forces of oppression. This is the human ritual we are talking about.

Check out the music video for “New Salem,” a single off of Rituals of Power.

In researching for these interview questions, I was very surprised that the current “misery index” sits at 5.55 percent in January 2019, which is about 2.5 to 3 percent less than it was five years ago. How the hell do you think this could be true?!
Kloeppel: Well, I’m no economist but if fewer people are unemployed and inflation is more stable, then that number stays down. To speculate, though, I’d say inflation in the U.S. is being artificially held at bay. Again, not an economist here, but interests rates have been really really low for what is seeming like too long a time.

Aside from Misery Index, you’re also a manager at Extreme Music Group. Tell us more about your role in the organization and its focus.
Kloeppel: I manage and co-manage bands from across the spectrum from just-starting-out to well-established. It’s a cool organization that has extended its knowledge and network to help up-and-coming acts alongside known bands. Each level comes with its own set of challenges, and progress is never instant. However, if a solid trusting relationship is maintained, and strategies are upheld, progress is made. It’s the kind of thing where you can easily get caught up in the struggle, but, when you look back, you realize the band has grown by leaps and bounds. That part is always very gratifying.

Aside from your professional life, you are a father to two children. How do you manage to balance Misery Index, touring, Extreme Music and being just regular old dad at home?
Kloeppel: It’s not easy. My wife is also working full-time and finishing her doctorate. We collaboratively time manage to the best of our ability. Occasionally, it becomes a tad overwhelming. But we are both very driven people, and we make a great team. The key to it all, and not so fun part of it, is you have to schedule everything to the hour. My brain wants to wander and be creative and spontaneous and does not like that part. But the act of playing with my family, creating music, and performing fulfills that. It’s just a shame that it must end in favor of achieving goals. We’ll both probably slow down at some point, but for now, it’s full steam ahead.