To coincide with the April 5th release of Enterprise Earth’s new record, Luciferous, due via Entertainment One and Good Fight Music, we present to you an exclusive track-by-track rundown from lead singer Dan Watson. The full breakdown is below, along with samples of the new music and tour dates, but first we suggest you pre-order your copy of the album here.

Founded in 2014 in Spokane, Washington, the deathcore five-piece completed work on the album last summer, alongside producer Jason Suecof, who has previously worked with heavy-hitters like The Black Dahlia Murder, White Chapel, Job For A Cowboy and Carnifex. The record is a smooth blend of death metal and metalcore with intricate guitar riffs, low bass, and vicious vocals. The band will begin their first tour in support of Luciferous tomorrow in Toronto and then are traversing Canada and the United States until early May. In this exclusive track-by-track runthrough, Watson delves deeper into the meaning and musicality behind each of the twelve tunes on Luciferous.

01. “Behold, Malevolence”
– An ominous drone accompanied with a memorable vocal introduction sets the tone for the record. It then opens up into an epic, powerfully blackened melodic valley of despair. Infectious choruses followed by a classical, soulfully written solo, the first track ends with a skull crushing, chuggy conclusion.

02. “Sleep Is For The Dead”
– With a powerful introduction and quick progression into a rhythmical trance-like chorus, we knew this should be early in the album. It really captures the strength and evolved maturity we wanted to portray with this record.

03. “He Exists”
– Keeping the momentum up we went with a fast-paced heavy hitter for the third track. “He Exists” immediately grabs your attention with intense blast beats and technical riffage then quickly drops into a heavy groove and pummeling verse. With catchy vocal hooks and unrelenting instrumentals, this was a clear choice for the first single.

Check out the band’s official music video for “He Exists.”

04. “Scars Of The Past”
– After three intense tracks, we wanted to introduce some of the new elements of Luciferous. “Scars” starts with an ambient, ominous clean guitar then drops into a low and slow chorus with layered, lush overtones. It picks up during the verse but quickly returns to the heavy downtuned riffage. Luciferous is definitely more melodic than our previous works so getting a track like this, which is a crossbreed of older material and new influences, early in the album was imperative to us in order to showcase some of the new sounds and styles.

05. “Ashamed To Be Human”
– This is a song about betrayal and contains some of the most in-your-face vocal deliveries on the record. Another track starting with immediate intensity, we wanted to follow up the slow, ambient vibe of “Scars” with something fast paced.

06. “Requiem”
– The middle of the album seemed to be a fitting place to introduce one of the major new elements to our sound, the acoustic guitar. A short interlude featuring a classical guitar intro and a wide orchestral arrangement, this fragile etude serves as a transition into the second half of the record and delves into the melodic and compositional depths of the album.

07. “The Failsafe Fallacy”
– The ending of “Requiem” flows right into the start of this fast-paced and cinematic song that serves as a bold step into our new musical direction. With an epic and constant melodic theme, this track features one of the strongest choruses followed by some of the heaviest riffage on the record.

As we said, the band’s new album, Lucifer, drops via April 5th, 2019 via Entertainment One and Good Fight Music. 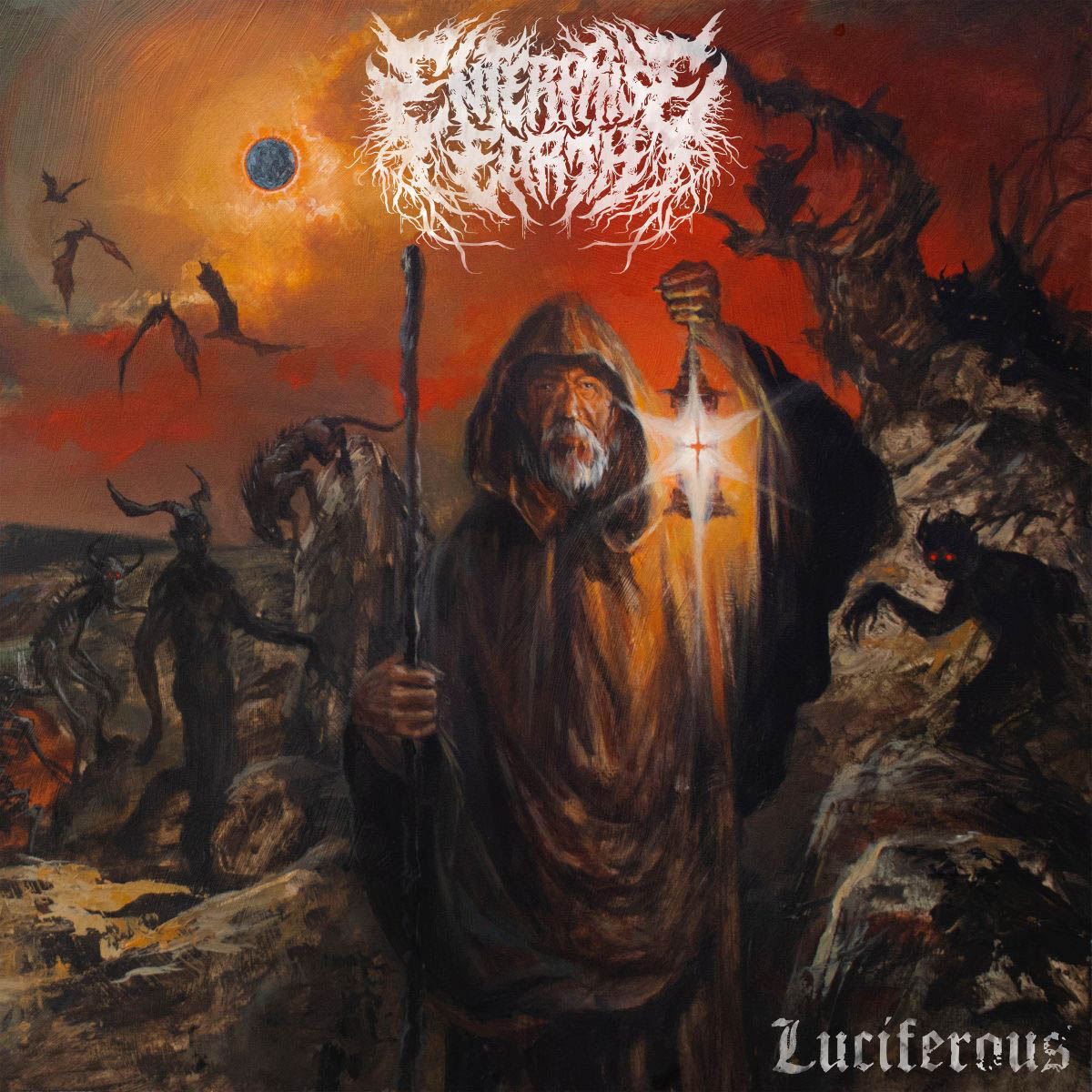 08. “Infernal Suffering”
– Continuing with the introduction of fresh themes and styles, “Infernal Suffering” is definitely a step out of our typical fare. If you heard this first without hearing the other songs on the record you may not even recognize it as Enterprise Earth. A fast-paced intro that drops into an infectious, groove-laden chorus with melodic leads and a memorable vocal delivery, this track is sure to show how far we’ve matured as a band and as songwriters.

09. “Luciferous”
– Returning to the ambient clean guitars and orchestral arrangements this track offers another glimpse into the diversity of this record. The despondent intro jumps sharply into a shrieking and powerful scream with epic instrumental arrangements. This song showcases theatrical elements mixed with the classic EE intensity.

10. “Nightfallen”
– This is a straight-to-the-point assault of violent and intense vocal and instrumental power. With an unrelenting barrage of riffs this song is sure to please old and new EE fans alike.

11. “We Are Immortal”
– A classical acoustic guitar eloquently leads the listener to an epic, baroque, and powerful intro. Diving through fast-paced guitar work and an intricate and groovy lead this track takes the listener through a labyrinth of twists and turns before dropping into one of the heaviest moments on the record. The intro motifs make an appearance at the end to offer a conclusion to this roller coaster of a song.

12. “There Is No Tomorrow”
– This is the largest departure from our old style by far. A delicate and despondent acoustic intro starts the journey to this eight-and-half-minute epic that encapsulates the entire sonic landscape of the record, offering vibes of death and destruction while also invoking uplifting emotions of hope. Delving through the highest peaks to the lowest of valleys, the listener is rewarded with the heaviest moment of the album as the closing section. This is definitely the most mature piece of music we’ve ever composed and is our collective favorite on Luciferous.

“Sleep For The Dead” is the latest single and music video to be released from Luciferous.

Let’s go back to the group’s Patient 0 album with the music video for “Shallow Breath.”