At the end of their opening set, Venom Inc’s Tony Dolan yelled to the crowd that “tonight was a metal allegiance show” while he motioned his hands about the venue in a collective fashion, gesticulating the bond metal music has between its musicians and its fan-base. There can be no better sentence to encapsulate tonight’s performance.

Venom Inc hit the stage at just before 9pm. Jeffrey “Mantas” Dunn, Tony “The Demolition Man” Dolan, and Jeramie Kling managed to whip the crowd into a frenzy as they worked their way through Venom classics intermixed with material from their stellar Avé album, truly one of the hidden gems from last year’s metal releases. Mantas, looking amazing, is quite literally back from the dead after a May 2018 heart attack steered him to double bypass surgery in Lisbon. The band was firing on all pistons tonight and left this writer yearning for more as they cleared the stage.

Time to stop what you’re doing and respect the “Pledge Of Allegiance” video.

Technically a record-release show for the Metal Allegiance sophomore album Volume II – Power Drunk Majesty, What this evening wound up being was a two-hour love-in celebrating metal with some of the best amongst the genre’s performers. Dropping numerous original tracks, the band also performed covers of “Life In The Fast Lane” (Eagles), “Electric Funeral” (Black Sabbath), “Stand Up And Shout” (DIO), “Room For One More” (Anthrax), “Hit The Lights” (Metallica), “Aces High” (Iron Maiden), “Restless And Wild” (Accept), “Elimination” (Overkill) and “Rapid Fire” (Judas Priest).

Band members walked on and off stage for most of this evening, with a minimum of five musicians on stage at all times. There isn’t a single track I could pick as a highlight tonight – as the full two-hour set was a metal fan’s wet dream. Don’t believe me? Look at the setlist below. Bobby Blitz singing “Rapid Fire” was epic. Mark Tornillo doing “Restless and Wild” was equally epic. John Bush and Mark Osegueda doing “Room for One More?” Also epic. Mark Osegueda and Alissa White-Gluz doing “Scars” together live? More epic. Bobby Blitz doing “Electric Funeral” live? So epic.

This concert was a gift of metal. If you missed it, take solace in the newly released Volume II – Power Drunk Majesty – a sophomore album that doubles down on the 2015 self-titled debut in every way possible. 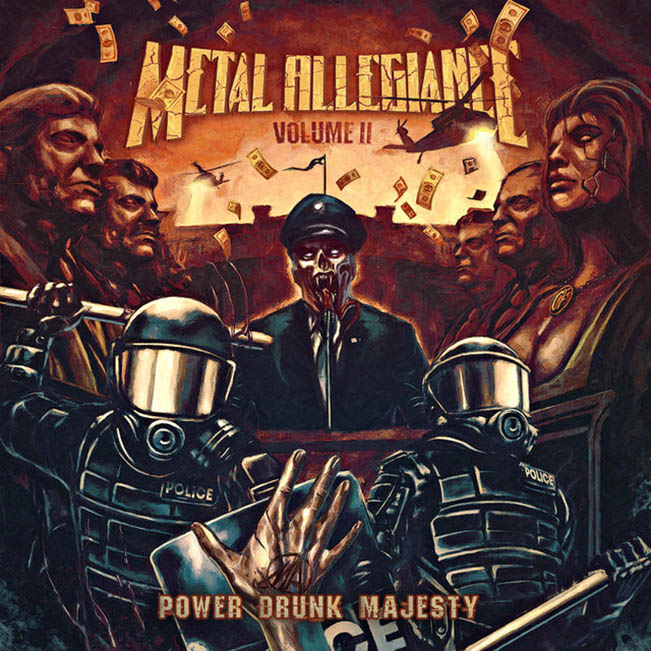