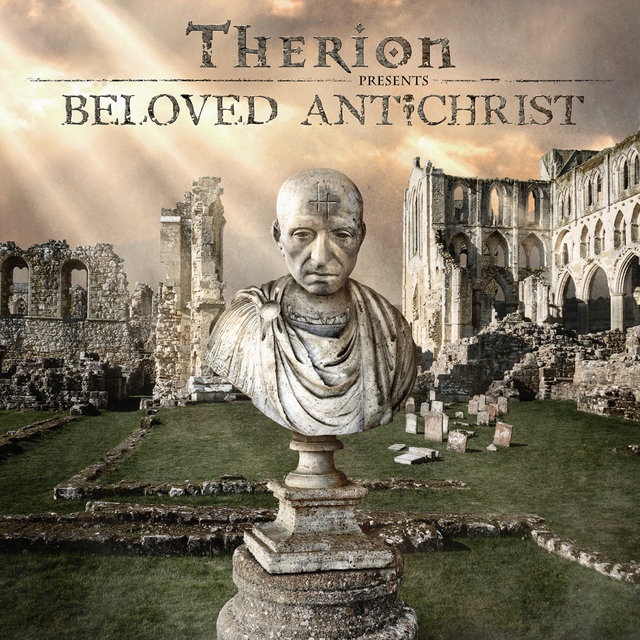 With Beloved Antichrist, Therion has put out one of the most expansive rock operas in recent years, complete with numerous vocalists, spectacular choral and orchestral arrangements, and a three-hour run time. However, despite the sheer magnitude of its brilliance, its magnitude, and its theatrics, Beloved Antichrist both triumphs as an opera and fails as an accessible metal record.

Short Tale of the Antichrist – the source of Beloved Antichrist – is the work of philosopher Vladimir Solovyov, a man whose most notable idea was to revive and expand the concept of Sophia, the feminine manifestation of Divine Wisdom, in Orthodox theology. The concept of Sophia evolved from the supernatural idea of feminine temptation into a more abstract, androgynous metaphor for the unity between humanity and the divine, taken from ideas in Judaism, early Christianity, Gnosticism, and pre-Socratic cosmology [1]. This is explored in Short Tale of the Antichrist, as the story ends with the reunification of the three religions in the story, Catholicism, Protestantism, and Orthodoxy following the defeat of the Antichrist. However, because Short Tale… reads more like a treatise on pan-theological concepts using allegories than an actual story, Christofer Johnsson, founding member of Therion, decided to expand it upon it by adding and changing characters. According to Johnsson,

“In the book there were only male characters. So the first thing was to get a bit of balance in there. Both for musical reasons and to be able to improve the story. The main opponent of the Antichrist in the book is Elder John and he has a limited role and is a boring old man. So instead, I invented Johanna to take his place. She is like a Joan of Arc inspired character and has now the second most important role in the opera. To make things more typically opera, she is the sister of the Antichrist’s wife (called Helena, also a person we invented), who is trapped between two loyalties.”[2]

In this expansion, Beloved Antichrist is the story of Seth, a charismatic man who rises to power as the emperor of a unified Europe. His political and philosophical aptitudes allow for the growth of the nation following a massive technological regression, which eventually leads him to be adored by all of his subjects, including Helena, the woman whom he marries. However, once it’s revealed that Seth is the Antichrist, war is declared against him, which ends with death and the moral of discussion of whether the Antichrist can be innately good.

As an opera, Beloved Antichrist triumphs – the choral and orchestral arrangements are fantastic and intricately constructed; the story is over-the-top and dramatic, with a flair for the emotional; and the vocalists use their voices to the nth degree to deliver colour and emotion to music that needs to be heard in order to be completely understood. The flawlessness of the musical production is also worthy of note; the vocals and orchestrations are clean and well-executed, and they are incredibly fun to sing along to. Everything goes according to Therion’s true-and-tried formula of bombastic voices and clean instruments. Imagine what it would be like to have a complete orchestra backing both the choir and the main vocalists playing parts, to have this play out on a stage. This is a highly professional production that is excessive and impressive – a testament to Johnsson’s work ethic and unstoppable creativity.

However, despite its triumphs, Beloved Antichrist is not accessible to most listeners. It’s a daunting piece of work that runs for three hours and has 29 vocalists. This already stacks the album against most metal listeners who were looking forward to Therion’s newest release and found themselves listening to an opera. Beloved Antichrist is essentially a recorded performance where most things are either sung or spoken. It’s also incredibly lackluster. The soundscape that Therion – and particularly Johnsson – has created is exhausting. How can something of this caliber be exhausting? As mentioned before, the run time is too long. Trying to listen to it in one sitting requires listening stamina and attention to detail, adding to the daunting nature of the record. The best way to approach it is to listen to it in pieces before truly trying to listen to it in one sitting with the lyrics in front of you. It’s not a great listening experience, and, by the end of the first act, you are considering opting out. It wouldn’t be surprising for most listeners to give up after the first act and then find the most interesting songs on their own.

The album also suffers from a lack of musical diversity. In most cases, the listener would expect the music in a record to go elsewhere, whether it is a key change or another time signature. Instead, the same musical themes repeat, and, by the end of the first six tracks, you are wishing for some life to be injected into it. Even the most memorable songs on the record, like “Temple of New Jerusalem”, are lost to the slog of repetitiveness, and its commitment to the opera aesthetic brings down the project to the point where the vocal talent is wasted. There is a reason projects like Ayreon and Avantasia have persisted; they have created catchy, memorable music that people can sing outside of the recorded storylines. Through musical cues, we know when the plot changes or when someone is feeling an emotion. On the other hand, Beloved Antichrist comes across as stiff, professional, and clinical, emphasizing high art for the sake of high art while ignoring the fun of metal. It’s dull, stagnating, and repetitive.

All in all, Beloved Antichrist both succeeds and fails at where it matters most: the music. It’s a shame, because Therion is well-regarded as a behemoth of musical experimentation and creative soundscapes. Beloved Antichrist is impressive and can theoretically work as a piece to be performed, but for all of their creativity and musical prowess, it is wasted on a record of this magnitude.

Sample the goods via a stream of the track “Theme Of Antichrist” here.