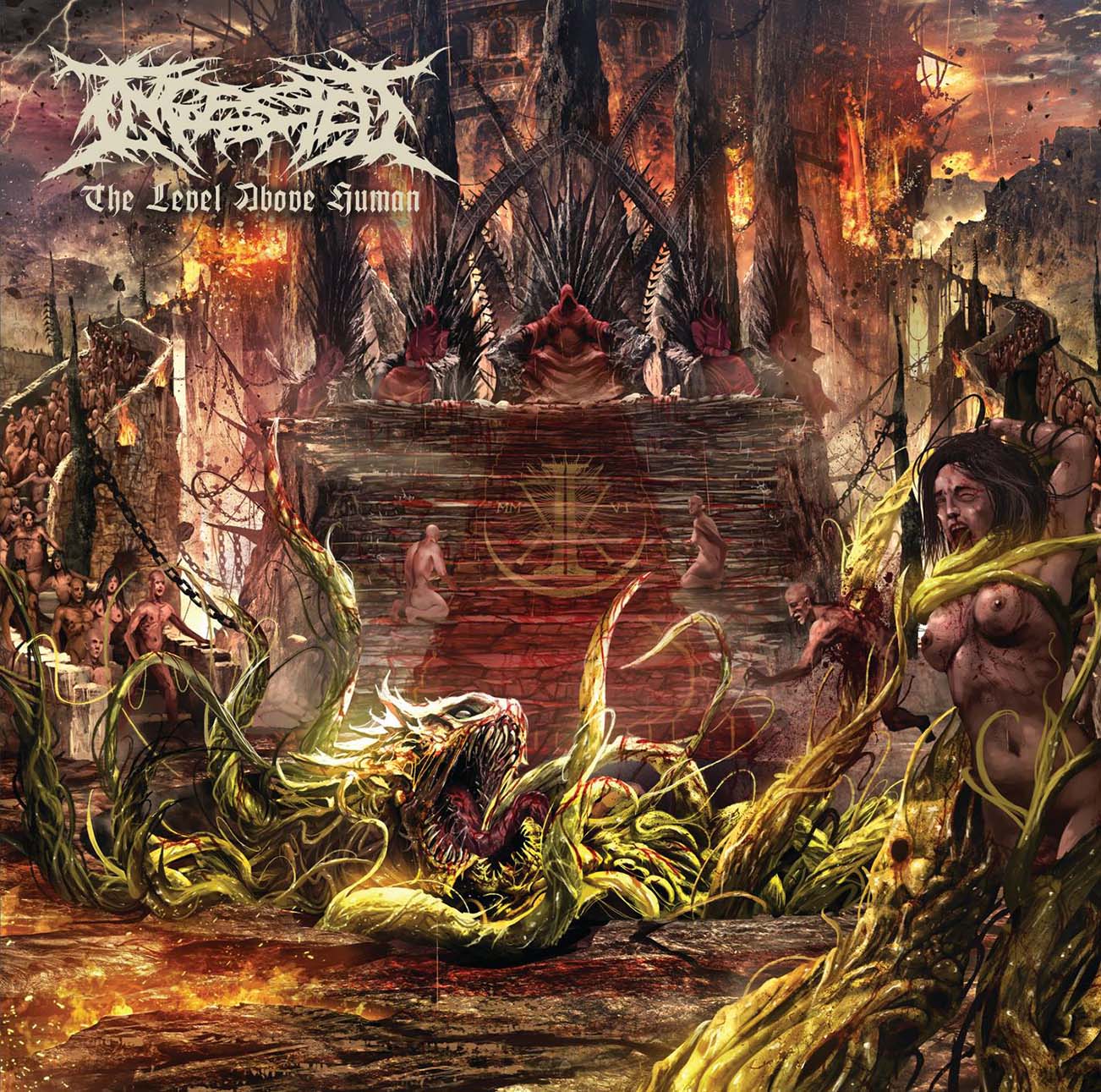 Debuting with 2009’s Surpassing the Boundaries of Human Suffering, Ingested emerged as part of a wave of young British death metal bands along with Trigger the Bloodshed (2008’s Purgation) and Annotations of an Autopsy (also 2008, Before the Throne of Infection). As the only one of the aforementioned bands still active, with original line-up no less, the staying power and quality of Ingested on the British death metal scene should not be underestimated. With fourth full-length The Level Above Human, self-proclaimed “World Wide Slam Kings” Ingested strive for global domination [1].

In the nine years since Ingested’s debut, they have released two other full-lengths (The Surreption, 2011 and The Architect of Extinction, 2015) each demonstrating an evolution of their sound, and yet with little threat of straying from the slam metal genre’s roots. On The Level Above Human the honing of their craft is taken to its zenith, gathering ten tracks which stand alone as a shrine to slam – gore-tinged lyrics overlaid onto thick grooves provided by palm muted guitar chugs coalescing with precise blast beats – at inhuman speed from the consistently excellent Lyn Jeffs. Combined with these traditional slam elements, within tracks “Purveyors of Truth” and “Better Off Dead” there is more focus on building a broader atmosphere with the track; straying slightly from the out-and-out heaviness in most songs within the genre. A straight-up death metal album this is not, however this occasional diversification benefits the simpler segments within tracks as a result of the contrast.

As someone who has been to numerous Ingested shows in the past, it is clear to pick out where the carefully positioned gaps in guitar and drums would be punctuated by the thud of flesh against flesh in a pit when performed live. Much like all slam metal, Ingested’s sound can be perceived as having an underlying threat of violence, and on The Level Above Human this threat pulsates and permeates with the potential energy of an active volcano. Lead track ‘Invidious’ is a prime example of this, carrying itself with irresistible momentum from moments of high-tempo thrash to the downtempo slams that underpin the genre.

Along with the tracks themselves, a further note must be made in commendation to the production and mastering team including the band, Stu McKay and Christian Donaldson. It is an exceptional achievement to balance both the depth required to fully capture the feel of the music whilst maintaining fidelity and a wide range of dynamics in this way. The production should be seen as a valid benchmark against which a wide range of extreme metal styles can measure themselves.

Given that death metal of this nature has existed for many years it would be amiss to describe The Level Above Human as genre-defining; however, it is the absolute peak of what the genre has to offer. If someone were unaware of slam metal they should start by listening to this album; if they don’t enjoy it then they should give up on the genre as it’s all downhill from here. Ingested have taken everything they’ve learned over their career from steadily improving studio releases and sweat-inducing live shows and in The Level Above Human have delivered the finest album slam metal has ever seen. This is a must-listen for all fans of extreme death metal, and a must-buy for all fans of slam metal in particular.

The Level Above Human Track Listing:

Check out the video for lead track “Invidious” below (flashing images).

[1] Excerpts from Ingested’s press release for The Level Above Human may be found here.