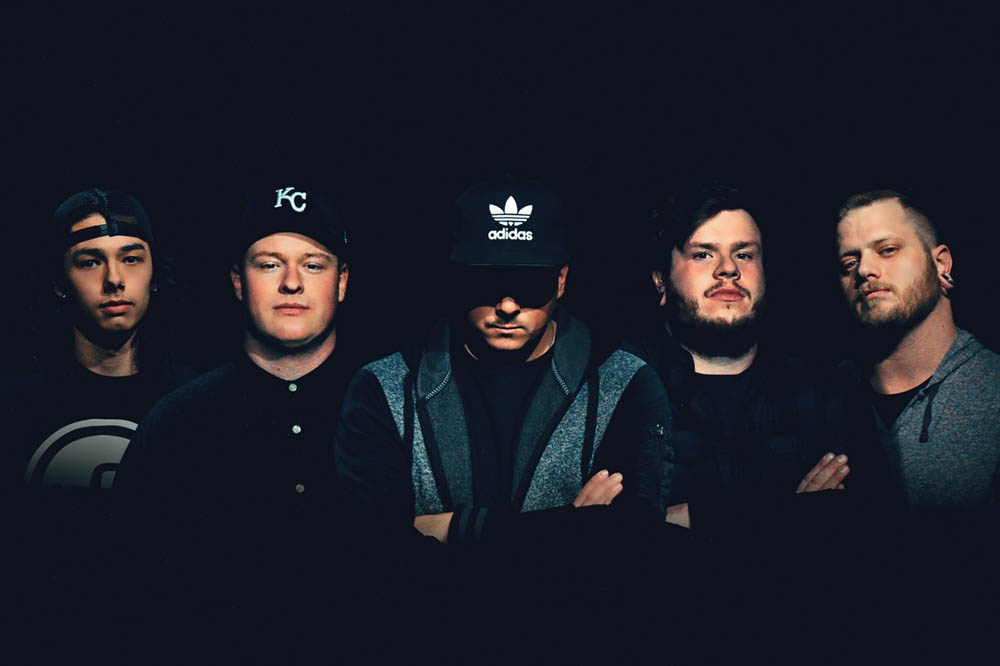 The unsigned Chillicothe, MO-based quintet From Myth & Legend punch out a splendid mixture of metalcore, hardcore and deathcore that should have fans of each of those genres perking up. Steadily growing since their early 2014 inception, the band have gigged both near and far, sharing stages with notable acts the likes of Cannibal Corpse, Upon a Burning Body, Miss May I and Beartooth along the way.

Their debut five-track EP Reflections only further proved FM&L’s aptitude for heaviness and are now set to follow up the 2017 release with their sophomore EP, Millennials. The album will drop this summer after vocalist Edwin Dunn returns from active duty overseas with the US Military. We wanted to know more, so we caught up with bassist Cameron Bay via email. Check out our interview below, along with the debut of the music video for FM&L’s second single “The 4th Wave”.

For those not familiar with your band, can you tell us a little bit about yourselves?
Cameron Bay: We started back in 2014 in a run down hole in the wall band house that used to be a biker bar in the middle of nowhere, Missouri. We all had the worst gear we’d ever played on. I was playing through a shitty 10 inch combo amp for guitar. Matthews had duct tape all over his drums and stands from having to rig stuff together, so it was usable. Damon had a head with only one working tube and a stage monitor for the cab, and Edwin used a line 6 spider combo amp as a PA. We’ve come a long way and had a lot of success both locally and regionally through the last 3 years. We have a lot planned following the release of Millennials, so keep an eye out for us!

You guys are an extremely heavy band, how does it make you feel when that power and energy you channeled in the studio comes to life in front of a crowd?
Bay: It’s always an amazing feeling, especially when the crowd is into it! We’re an energetic band when performing and we feed off of the crowd’s energy. We’ve played a few shows where the crowd may have been at the wrong show. Like maybe they meant to be at the jazz show the night before and were not into our show at all and that makes it kinda awkward having an energetic performance because everyone’s just standing there while were throwing down, but those hardly ever happen. But yeah, a venue full of people throwing down and jumping to your music is an adrenaline rush like no other! I love it!

This is it! The premiere for the band’s “The 4th Wave” video featuring Matt Mccoy, Austin Spencer-Androes, Storm Ruby & Jake Burge.

When you write do you do so with the live setting in mind or do you write a song just for the song’s sake?
Bay: We like to do a mixture of both. We always try to write a song to its full potential, but we always need to keep in mind how we could translate that to a live setting as well. It can sound amazing on the album, but if you can’t replicate that explosiveness and energy live then you’re just cheating yourself and the fans.

Along those same lines do you take advantage of technology and email riffs and parts back and forth, or do you get together in a room in a more traditional sense and write together?
Bay: We have a solid mixture of both. We usually start by jamming together in a room to get the ideas flowing and get everyone in the same mindset for a song. After that, we all continue on our own and email ideas back and forth and build off of each other. But we always finish it up all playing together so we can do real time final tweaks to finalize everything.

What’s the story behind the name of the band?
Bay: It’s really not a great story or deriving from any meaning. I wanted something with the “&” symbol. That’s really what it came to and From Myth & Legend was the first thing we could agree on.

What is the story behind the name of the new record?
Bay: The story behind the name Millennials was based a lot around social controversy, stereotypical things people have said or posted about on social media. Political correctness, race, this new wave of feminism, social triggers, etc…. We touch on quite a bit of hot topics that people are yelling and ranting about lately. 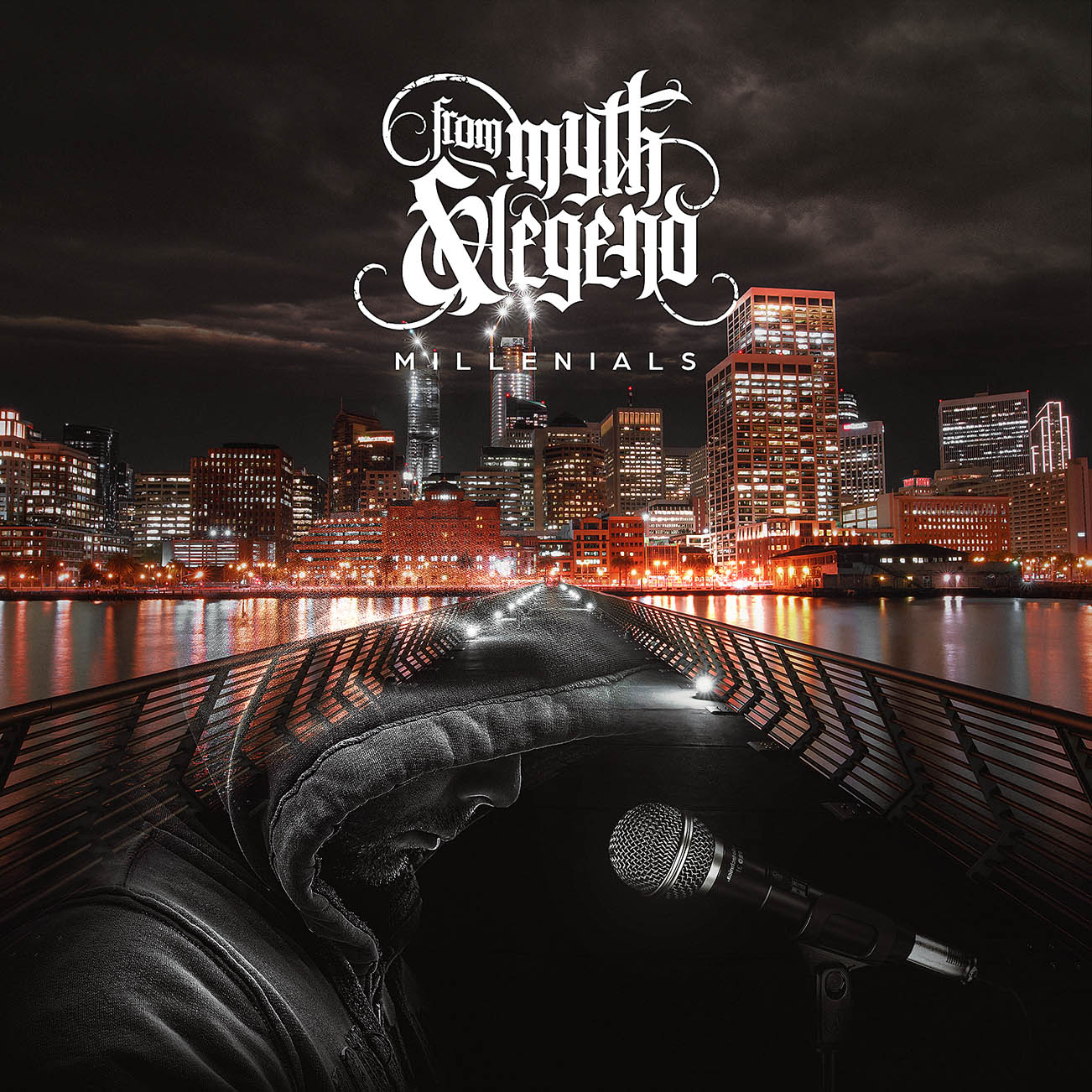 Do you receive a lot of support from your local scene and fans in general?
Bay: Sure, we have a lot of support and have amazing fans, but we also have some haters because we say what we want and it doesn’t always go along with the PC agenda of the week. Music used to be an outlet where you could write about anything, but now if you say one thing in your lyrics that rubs someone the wrong way then a certain crowd will swarm you with hate and intolerance. It’s funny because they’re usually the same ones preaching tolerance. But we welcome both the love and the hate, and the fans we have far outweighs the haters. What can you do though? Haters gonna hate!

Do you have any rituals before you hit the stage? If so, what are they?
Bay: Smoke, drink a vodka red bull, and take a piss. Not a very exciting ritual if you could even call it that. But that’s usually what you’ll see me doing every time before I go on stage.

Do you have any touring plans in support of the new recording?
Bay: Nothing that we can specifically talk about right now, but upon the release of Millennials we are lining up a few tours and talks of a couple festivals. It’s going to be an exciting year for sure!

What is the strangest thing that has happened to you on tour, or at one of your shows?
Bay: One time we got pulled over on tour and we were surrounded by like 10-15 state troopers with guns drawn. That was pretty crazy! Apparently our van matched the description of a guy that kidnapped a little girl or something like that. Once they saw we were a band and saw there were no children in the van they explained what was going on, but we were all a little freaked out until the troopers relaxed and put their guns away. Well, all except Damon, he slept through the whole thing!

This is the lyric video for the band’s above-mentioned single “No Lives Matter”.