Oregon Trail are a young post-hardcore band from Le Locle in the Jura mountains of Switzerland, set to release their second album, H/aven, on February 16th. I chatted with drummer/lyricist Arnaud Martin about the landscape, subgenre, and the challenges of being a metal band in Switzerland.

Oregon Trail’s first album, Century (2015), was effectively a concept album, exploring each decade of the twentieth century through the lenses of violent historical events wrought in the name of misplaced ideals. “With the first album, we came up with quite a precise theme beforehand, but this time I had a lot more freedom. There are certainly some thematic ideas, but they’re less fixed than the first, less complex. The title ‘H/aven’ is a play on three interpretations of the word. Firstly there’s obviously haven as a place of protection, of safety. Secondly there’s the reference to heaven. And then there’s ‘aven’, a French word referring to a type of cave created by underground streams.“

And what about that slash, which on their Facebook page Oregon Trail explain by way of ‘because we’re fucking hipsters’? “The slash is a bit of a joke yes“, smiles Arnaud, “but it’s also part of the aesthetic. Little details like that, including the cover photograph taken by our bassist, they’re all important and contribute to the overall aesthetic of the album.“

Our discussion inevitably turns to the subgenre label of post-hardcore, a slightly contentious term in that it is often slapped onto bands that defy any other description; a word to use when we can’t find the word. Arnaud agrees to an extent, and Oregon Trail identify with metal as well as punk, although they did choose the post-hardcore label for themselves. “When we started, it was difficult for us to determine in advance how we would end up sounding, so we chose post-hardcore as a description because that’s what we were listening to at the time. For me, post-hardcore signifies a divergence from metal; a type of metal that is authorised to take elements from the outside- from rock, indie, black metal.. We are fairly open-minded in the sense that we try lots of things, we don’t limit ourselves. If there was a more precise term for our sound I would take it, but in the circumstances, post-hardcore is ok.”

Watch the band’s official “Aimless at Last” music video below.

I mention the so-called New Wave of Post-Hardcore, and Arnaud immediately begins nodding, since there are undeniable traces of Defeater>, La Dispute and other members of ‘The Wave’ in Oregon Trail’s sound. I ask if that was a conscious influence? “We all listen to an enormous amount of music, ranging from extreme metal to the softest pop. At the beginning we were influenced by Have Heart, and things that were more definitely post-hardcore. But we never wanted to sound like them, or anyone else. Touché Amoré are quite similar to our sound, but none of us have been listening to them recently, so we weren’t thinking of them. When I listen I think – yes, perhaps we sound like them – but they do their thing, we do ours. We are not afraid of being influenced, we are not afraid of sounding like one thing or another. We can detach ourselves from that quite easily.”

Arnaud agrees with me that there are also hints of black metal in the Oregon Trail sound, notably with the ominous tremolo picking. “Yes, definitely. Black metal has somewhat emerged from the underground, it’s become that little bit more mainstream, and we have probably been exposed to it because of that. Certainly myself and my guitarist listen to black metal, and the atmosphere, the ambiences, the sounds you couldn’t have before in a subgenre like ours, now we can develop them, which is fantastic.”

Oregon Trail formed and developed organically; they met as strangers in 2012, learned their instruments together, learned to compose and perform together; “We work as a unit. If the four of us don’t work together, we have no idea what we are doing. We are self-taught, and we help each other.” 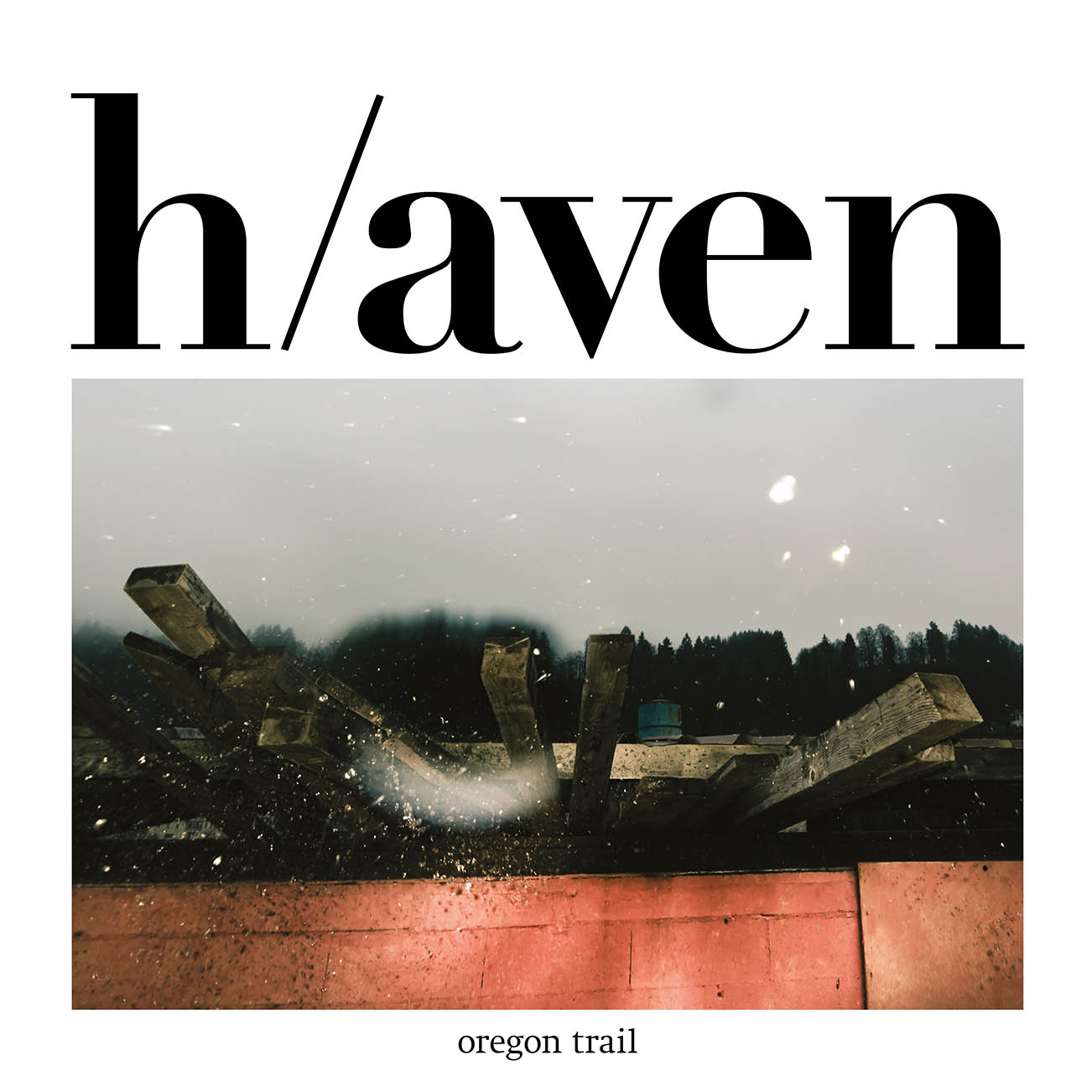 The new album was recorded at Studio Mécanique in La Chaux-De-Fonds: “It’s a fantastic studio where we know the team; we like to work with people close to us, and we did it all live.” Arnaud explains that the scene in this area of Switzerland is very ‘DIY’, entirely appropriate to hardcore of course, and he notes that there’s quite a lot of punk and metal around there for such a small population. “Let’s say there are around 20,000 people in the region around La Chaux-de-Fonds, but dozens of rock groups. It was cool to grow as a band around all that.” Arnaud says that Oregon Trail don’t feel particularly constrained by their geographical location: “There are opportunities. We don’t feel limited. But it requires a huge amount of effort. There are only a few people working on promoting rock, punk and metal in Switzerland, and we are sometimes overlooked by the big European festival promoters.”

Perhaps unsurprisingly for a hill-dwelling band, the lyrics and atmosphere of H/aven are filled with contrasts in relief, highs and lows, the changes in landscape and weather that can affect the psyche. Says Arnaud: “Switzerland is a small country, but to travel through it is amazing; the landscape constantly changes, the mountains are so impressive that it’s impossible not to be affected. When I think about Swiss authors or artists, there is always this humility faced with an incredibly austere environment such as the Alps. You feel a certain naïvety in the face of nature, and you want to try and transcribe that into music, or literature, or whatever artistic medium. So we try to transmit into music those super-intense emotions, but with our human methods which are so limited.”

But Arnaud debunks my theory about the dark valley towns of Switzerland, that living in shadow instils a sort of existential desperation that creates musicians. “I think that idea is more applicable to lower-lying countries, and within Switzerland to lower-lying cities such as Geneva which experience months of cloud cover. In reality in Le Locle, La-Chaux-De-Fonds, our region, there is lots of sun; living in the mountains there’s plenty of light, so I’m not sure if that plays a role. It’s more the extremes of climate, and how it changes so quickly. We are lost in the middle of nowhere, where sometimes you have to dig for an hour through the snow to leave your house. Perhaps it depends on where you live within Switzerland. But there’s definitely something in the ‘imaginaire suisse’.”

There will be a launch show for H/aven on February 22nd at the Queen Kong Club Qkc, Neuchatel, and Oregon Trail hope to add more dates to their 2018 schedule soon.