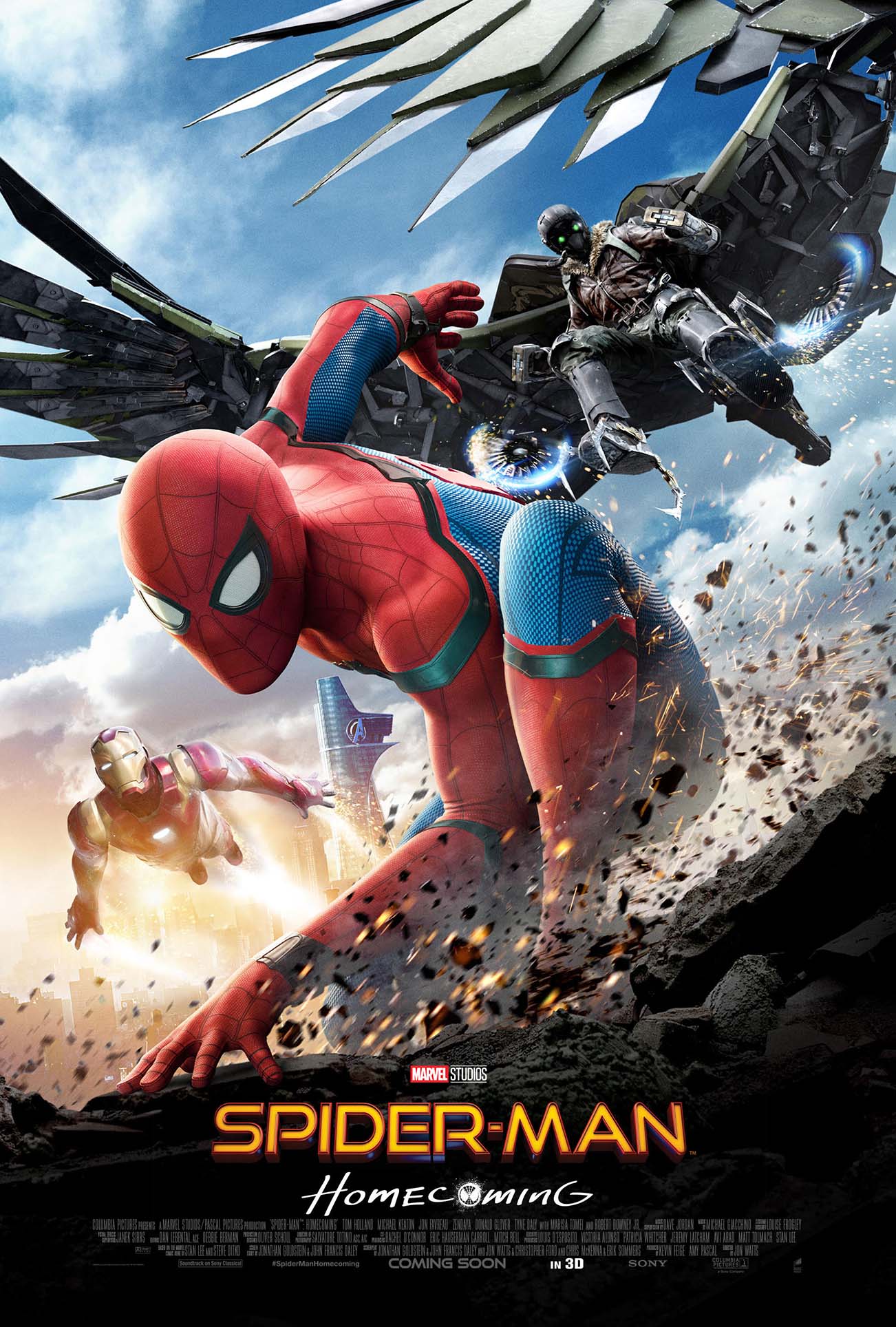 As a child, you live for Saturday morning cartoons. I remember creeping down to my parent’s basement, holding my breath as I passed their bedroom, and carefully avoiding the one stair that creaked just slightly louder than the others. The television lit up, and the 1967 Spider-Man theme would emanate from its speakers, barely audible so not to wake anyone who might disturb my weekly tradition. The show was truly awful, but a child’s mind can fill in the laughably undetailed animation, and look past the simplicity and ridiculousness of the scripts. Through high school, the web-headed wall-crawler again accompanied me via his comic books, his bombastic antics never failing to put the seeming chaos of teenage life into perspective. Spider-Man has always seemed to me the most relatable of the mainstream superheroes, and yet, despite my fond memories of the character, I wasn’t excited for Spider-Man: Homecoming. Like many other fans, I was disappointed in the character’s previous three cinematic outings and the marketing did little to convince me that the first instalment of another Spider-Man reboot would be worth watching. I have seldom been happier to be so entirely wrong.

Spider-Man: Homecoming is directed by Jon Watts and features Peter Parker (Tom Holland) following the events of Captain America: Civil War as he acclimatizes himself to both the life of a superhero and that of a teenager. Peter (Spider-man) uses the aid of Tony Stark/Iron Man to master his newfound powers, investigate a rising weapons dealer, and hopefully find a date to the dance. This incarnation of the character is by far the most youthful and optimistic audiences have seen on the big screen to date, due largely to a highly charismatic and convincing performance by Tom Holland. The extensive supporting cast is filled with compelling and diverse new characters, but Michael Keaton is the undeniable standout. Superhero movies of late have repeatedly suffered from lackluster villains such as Iron Man 3’s The Mandarin and Suicide Squad’s Enchantress, and it’s refreshing to see Keaton deliver a fierce and layered performance that allows the film’s antagonist to stand alongside Loki as the best in the Marvel Cinematic Universe thus far.

Spider-Man, much like Robin before him, was created with the sole intent of connecting with young readers, and Homecoming is the first of the web slinger’s films to perfectly embody that mentality. This is foremost the story of a high school student experiencing teenage-hood, and as such, John Hughes’ influence is immediately evident. The “coming of age” genre blends seamlessly with the existing Marvel identity and works to greater effect than audiences have seen in years. From the opening Marvel Studios title card, Homecoming is brimming with charm that rivals that of the first Guardians of the Galaxy, and the film never ceases to instill adolescent nostalgia.

Spider-Man: Homecoming is, in many ways, the perfect Marvel film for 2017: addressing a bevvy of frequent complaints and altering the tried and true formula just enough to prevent it from becoming stale. The aforementioned villain is a vast improvement over the Marvel standard, and the film cleverly finds a way to mitigate the hoard of angry fans questioning why the Avengers didn’t rush in to save the day. In typical Disney fashion, the storytelling is textbook perfect, albeit arguably formulaic, and Homecoming features the now standard well-scripted action viewers have come to expect from a Marvel Studios production.

Another of the film’s most effective elements is the humour, something Spider-Man: Homecoming has in abundance. Unlike most modern blockbusters, the comedy here feels genuine and serves to develop character rather than simply providing a moment of levity. The jokes are organically integrated into the story and seek once again to recapture the awkward magic of being fifteen years old. The comedy is also noticeably self-aware, territory Marvel Studios had previously left unexplored, but will be familiar to those who saw Deadpool upon its release last February.

Homecoming is not without its flaws, however, and the few that are there could potentially compromise the experience for some viewers. The film feels decidedly small in scope when compared to previous films from both the Marvel and Spider-Man franchises, despite Homecoming’s monstrous budget. For some, this will be a positive criticism, as it allows the movie to cleverly avoid clichés such as the infamous blue beam of light inexplicably shooting into a stormy sky. However, younger audiences, in particular, may find the film resultantly boring or slow, as there is considerable downtime devoted to developing Peter Parker’s character. The stakes are also somewhat lowered here, with Spider-Man’s journey revolving largely around proving himself as a hero rather than saving the lives of those he loves, and action sequences can occasionally feel inconsequential as a result.

Nine years ago, the Marvel Cinematic Universe made its first foray into total box office domination with 2008’s Iron Man. Now, the brand shows no signs of easing its conquest as fans finally have a standalone film that supersedes the universe’s inaugural outing. Spider-Man: Homecoming may not be the most culturally significant superhero film to be released this year, but it is a superb contribution to what is quickly becoming the best year in history for comic-book movies.