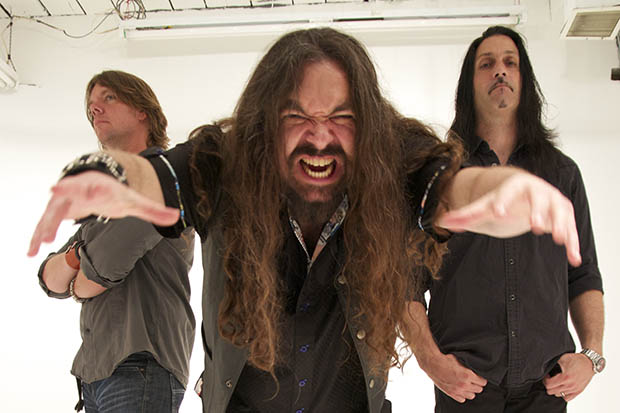 Interview with The Alien Blakk; Joshua Craig and Johnny Kelly Discuss Their New Album ‘Begrudgingly Yours’

One of the most unique musicians in the world today is Joshua Craig. Craig has had a prolific twenty year career working in music as a producer, songwriter, video game music composer, author and as a guitarist-for-hire for many artists, including members of Type O Negative, Fear Factory, Testament, Kiss, Rob Halford and dozens more. Since moving to Phoenix, Arizona about ten years ago, Craig has been the mastermind behind his own musical project called The Alien Blakk.

As The Alien Blakk, Craig has released two records, Modes of Alienation and Bekoming which both illustrate the high level of musical acuity that Craig possesses. The band’s third record, Begrudgingly Yours, is currently being recorded along with drummer Johnny Kelly. We recently spoke to both Joshua and Johnny about the recording process for Begrudgingly Yours and what we can expect from this monumental release.

Begrudgingly Yours is an album that has been in various forms of production now for over six years. Did you originally set out to make this creation such a long-term project?
Johnny: Looking back, it most definitely has become a long term project! Whatever I get involved in, I always keep an open mind and try not to have any expectations.

Joshua: No. The prior release, Bekoming took three years to complete. This record has been in different forms because of the different vocalists and players that have been involved. David Pastorious, who worked on the first three bass tracks that we had recorded at Robert Trujillos house did a great job as well. David’s tracks could possibly end up on a version of something somewhere down the line as well. It also morphed when singers such as DMC from Run DMC and others who were supposed to do work or did work but it didn’t work out in the exact fashion I was interested in.

DMC did do a great job on multiple tracks and he was cool. Those tracks may see the light of day as a B-side or an extended edition of the record but the record has now become a focused approach and has ended up being what it always should’ve been since day one. Sometimes we take the long road for the shortest path. 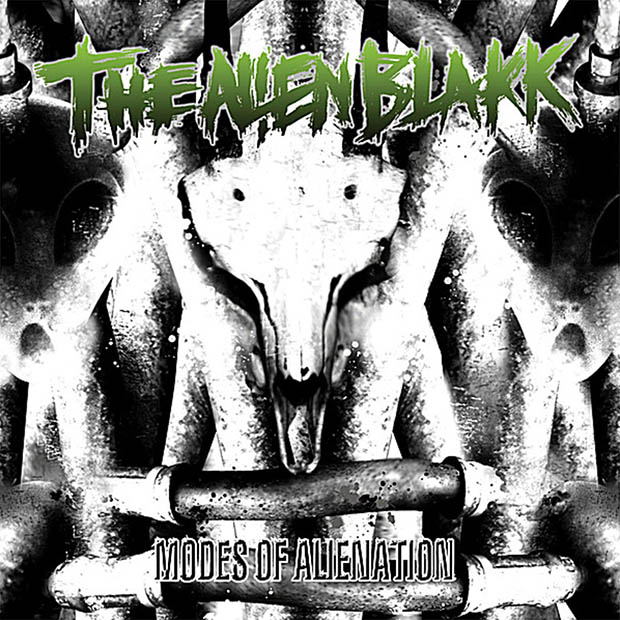 You have spent a long time perfecting the sound of this record which I’m guessing is fairly close to release now. Do you feel like you finally have it sounding exactly the way you want it to?
Johnny: There’s something unique about the songs. They do seem to have their own identity. It’s definitely outside the box compared to what I’ve been associated with throughout my career. Like with anything else I’ve done in the past, I’ll always hear something and want to do it differently.

Joshua: I have to go with Johnny on this one. Every time I sit down to do some recording, what comes out of me is not exactly what I was planning on doing. What’s in your head and then what comes out of your hands can be totally different. Then after you listen to something up close and scrutinize the section of music, you may alter it again at that point to get to an intended place.

I have sat with this material and I recorded one section at a time. One track and one pass at a time to make sure everything has a very specific sounding element. It’s not exactly the way I wanted it to sound, it’s better in certain places and it’s different and more unique in others. I’m happy with the progress and it’s still being recorded.

I never set out to have a preconceived notion about how anything should sound. I go through the process and whatever happens, happens. I accept sound and tone as something that has been acquired over time through my hands, ears, equipment and practice in recording structure production. Every record is different.

How would you describe your feelings on the making of Begrudgingly Yours? Would you say that it, at any point, has been a frustrating process?
Joshua: I don’t feel frustration is part of the music but it’s part of life because I always want to do more than what I am doing. If there isn’t something coming down the pipe while I’m on one situation, it’s a frustrating thought. I’m not really a frustrated person but the energy that has come into this record has breathed new life into the process of patients in my mind for sure.

Johnny: In my experience, frustration is part of the process whenever you’re creating something. 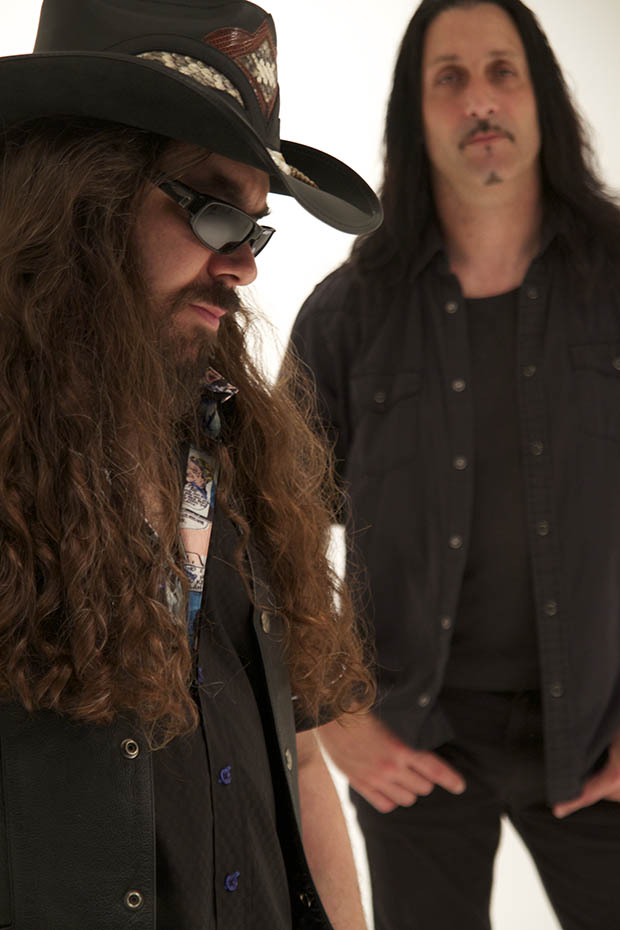 Joshua: Again, Johnny has made the answer more simplified. Let me complicate it for you! (laughs)

Johnny and I originally began getting together in Brooklyn and rehearsing in the old typo negative rehearsal space. We were going there for three hours at a time and would spend a few days working on music. I would then take it home to Arizona or back to Boston and try to perfect those songs. Through the process of the first couple of batches of music, I did one piece of a song with a wah pedal and an Octaver. Johnny heard that and said “that sounds like it’s an interesting approach. Let’s try to have a focused direction and write material along that line.”

That began the search for a sound that has become a predominant part of the material we have so far. Sometimes we would get together for two or three days in Brooklyn, sometimes in Boston, sometimes I would write stuff and send it via email. Sometimes I would take time to work on the animated TV shows, books or video game music I would be working on and not want to put my creative energy into two things at once. The sound of the guitar music is unlike anything I’m familiar with. Some songs have a normal approach on playing of course but some of the parts in sections or arrangements are completely bizarre.

Considering I listen to everything from Alan Holdsworth to Slayer, I feel I’ve touched a nerve with something that I want to represent and share. Thinking back, we could’ve use the original 20 songs and cut to records. Johnny wanted to have more of one uniform sound. The Alien Blakk records are definitely out there and have a lot of material and a firm guitar approach to them. This time I took all the backdrops but focused it on one type of sound. It still sounds like many different elements and influences but it is much more geared toward an approach as opposed to a bunch of expressions been put onto record. 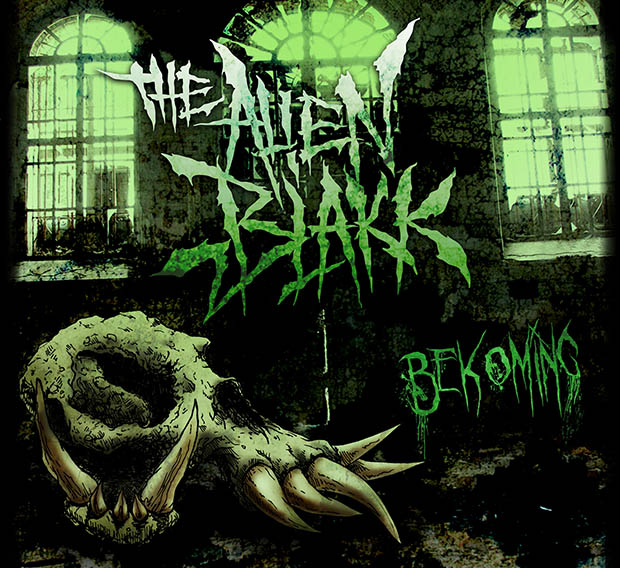 Begrudgingly Yours is very much of a reflection of a work that all three of you were interested in creating. How difficult was it to find this common ground among all of you?
Johnny: The three of us are from different parts of the country along with different musical backgrounds. To me the songs are where the common ground is.

Joshua: The idea of having your work reflect who you are comes when one person start something and allows the influence and professionalism of others to come in in full force. I do my thing, Johnny does his and it goes down the line and so forth. I would always come in during the process of something if it needed to be a certain way to help put my thoughts into it but it didn’t take too much prodding. Everyone knows how to do what they do so you have to let people be who they are to get the best results out of them.

Do you have plans to tour behind Begrudgingly Yours? Have you given a lot of consideration to how the songs will translate live as you’ve been writing and recording them?
Joshua: There will be touring and live performances, yes. We will have to see what the situations are that are offered and what the availability of everyone is but there will definitely be live playing behind this effort. The live translation will be whatever happens the night it’s being played.

Johnny: We’ll have to see what our options are when the time comes.

What’s next for you guys after you finish up the writing and recording of Begrudgingly Yours?
Johnny: There are a couple of things on the “To Do List” that are coming up this year.

Joshua: Funny thing you should ask! Since the writing and recording is at a point where it’s mostly done, I’ve just begun to write a new batch of songs to be recorded. A few more pieces and add it onto this record. That goes to the answer that John gave you of the to do list. There’s definitely more to come,…stay tuned!