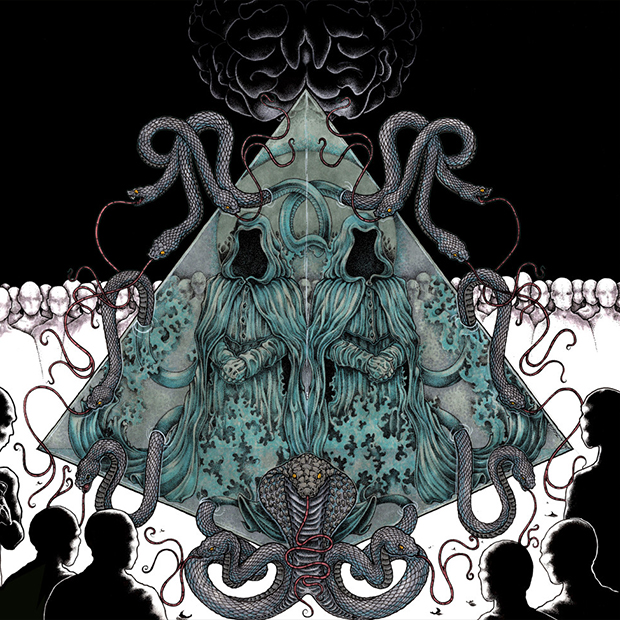 Droning, sonorous distortion is the calling card of a generation of musicians who are seeking to place the modern day listener in a box with how aggressive and insurmountable their sound is capable of being. And, just like the rest, Mirrors For Psychic Warfare comes in with their own vision of the formula, albeit in this particular outfit, the approach seems more sincere somehow, like a Radiohead/Godflesh hybrid creation that had been chained to a radiator in a dungeon for some years. And maybe Mike Patton had occasionally come in and fed them scraps.

That’s the best I can do in terms of emoting the type of misery that MFPW have released on this album, the result of collaboration of Scott Kelly (Neurosis) and Sanford Parker. It is a brooding, languorous beast of an album that seeks to firmly venture into the experimental meets heavy side of instrumentation and tone. Somehow it all works, with deft switches and moments of brilliance that are sandwiched between other concepts that are decidedly more searching than they are result. But the overall tone of the album is one that feels like a successful recording of two minds finding each other in a world of painful vision, and the result is more win than loss.

The drifting reverie of the album is consistently matched up with other parts that swing with unbridled rage, which makes for crushing listening. This tonal shifting is decidedly necessary when one happens upon songs like “I’ll Try You All”, which while dissonant and intense, are otherwise singular in their intention and execution. This is why one finds one’s self returning to other parts of the album that soar, such as opener “Oracles Hex” or “A Thorn To See”, which together more than cover the cost of admission in terms of delivery for the album. For onlookers wondering whether to jump into the fray, certainly give the first two a listen. If you’re still around after the denouement of “CNN WTZ”, this may be your album of the year if you’re into dark experimental noise-influenced metal territory.