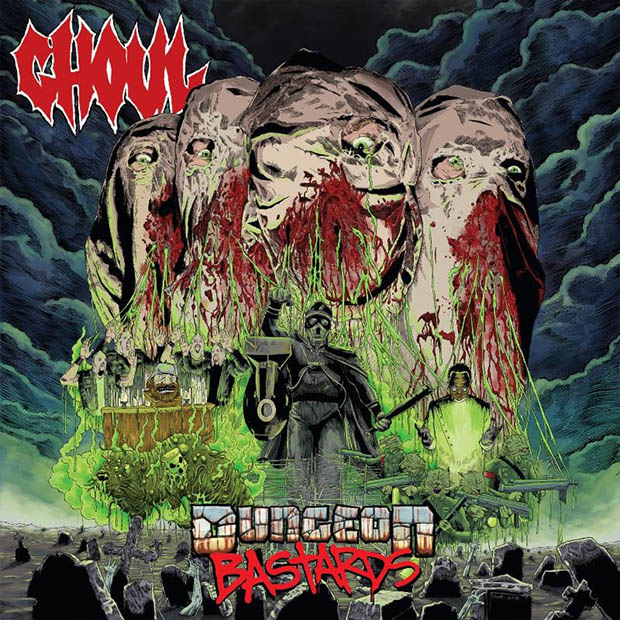 Ghoul is a gem in a sea of beige rocks when it comes down to the amount of heavy music that’s coming out in droves these days. This band is fun to watch, has excellent musicians and is a throwback to a time when you didn’t have to take life so seriously (see The Mentors). Who can’t get into a band that describes itself as Creepsylvania’s favorite hooded, cannibal splatterthrashers? What I’m saying is that you need more Ghoul in your life!

Dungeon Bastards, is Ghoul’s fifth studio full-length so they know what they’re doing by now. The production is crisp, choppy and in-your-face…the hallmarks of any great thrash/grind album. There are also enough hooks to give Bass Pro Shops a run for their money. Some of the more spirited tracks include “Bringer of War”, a straight banger that has a feel of early Carcass and M.O.D. “Ghetto Blasters”, although an instrumental, will commence your head to start bobbing to the old-school thrash style riffing. Overall, there really isn’t a weak song on Dungeon Bastards, the only bummer is that I wish the album was longer, I mean 10 tracks isn’t nearly enough.

For those that need the vinyl edition of the album, you’re in for a ghastly treat….check this shit out! “The record will also come in slime green and blood red vinyl options with a gatefold jacket that opens into the Dungeon Bastards board game. Players take turns advancing through a Creepsylvanian map; the first one to get to end of the map and jump the Wall of Death wins.” Nice! Ghoul is currently on tour in the U.S. with Carcass (go figure), Crowbar and Night Demon. Don’t miss them!

Check out the song “Ghoulunatics”