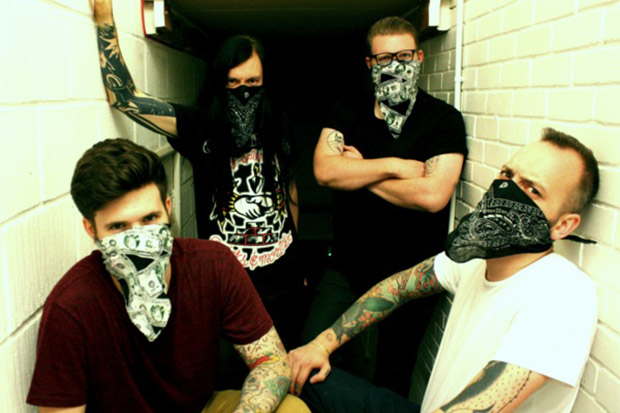 The Skinny: Notorious, bandana-clad mosh-crew The Hell return with their brand new album, Brutopia. Renowned for their less than subtle satire and a brutal lashing of fist-to-the-face riffs and grooves, Brutopia is the band’s wildest ride to date. Brutopia will be released via all digital platforms on October 30 via Prosthetic Records, while a physical release – including CD and limited edition vinyl bundles – will be out December 11.

To coincide with the announcement, the band debuted the album’s first single, “Sick”, earlier this week on BBC Radio One’s “The Rock Show” with Dan Carter. Brutopia was produced, recorded, mixed and mastered by Nails & Black Mist at Titan Studios in Watford, UK earlier this year.

Described by Rocksound as a “chugga-chugga-masterclass,” Brutopia follows a year of notorious festival appearances at Reading & Leeds, Sonisphere, Copenhell, Groezrock and the Hevy Festival and baiting/polarizing the music press with their gob-shite rhetoric and cutting social mockery. “You don’t listen to The Hell, The Hell take a shit down your ears,” furthered Rocksound, and they are not wrong. It has not stopped the band’s anthems garnering widespread commercial airplay either, being lauded by leading BBC djs Dan Carter and Zane Lowe.