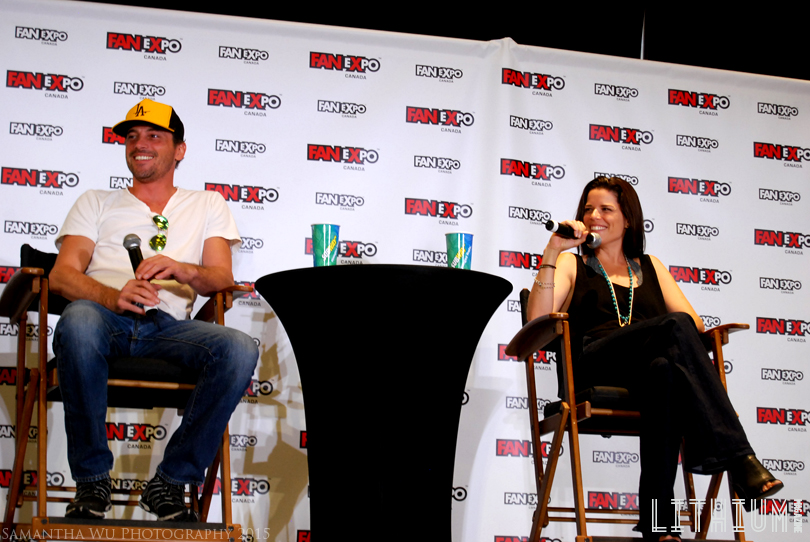 This year FanExpo in Toronto spanned the entire Labour Day Weekend, with a massive turnout of event goers funneling into the Metro Toronto Convention Center, many of which were in full cosplay attire in spite of scorching temperatures.   In addition to Artist Alley, over 900 retailers, a gaming area, and the ability to meet and be photographed with icons and celebrities, the Expo also featured a multitude of panels and discussions.

Here is a rundown of but a few of the panels featured over the course of the 4-day event.

Friday morning kicked off with one of the newer additions to this year’s Fan Expo lineup, one that many fans were excited to see happen – a Boondock Saints reunion that brought stars Sean Patrick Flanery and David Della Rocco together for a talk. The only way this talk would have been better is if the other MacManus brother, Norman Reedus, had appeared as well – and he was in attendance, appearing as part of the Walking Dead panel on Sunday.

The Boondock Saints talk was impromptu and unstructured, the first one I’ve seen where there wasn’t a moderator present to take audience questions or offer their own, which resulted in an hour-long panel of Flanery taking the lead (while Rocco studied the Fan Expo program leisurely and offered his few cents when prompted) talking about anything and everything that came up. This is how a discussion about preferred salad dressing, smooth or chunky peanut butter, and Twinkies came about. It’s because

Flannery is a jokester, coming off entirely as that life-of-the-party foul-mouthed friend you look forward to having weekend beers with just to see what he would do next, that no one cared or minded where this talk would go.

When the conversation steered back to his work on the Boondock Saints franchise, Flanery offered stories about working with director Troy Duffy, filming in Toronto, shooting with Billy Connelly (who would tell stories about himself and his buddy David, who he later revealed to be David Bowie), and shooting with Willem Dafoe (a method actor who stuck to his character so often when not filming that he would spew out random curses and profanity at the most awkward public moments).

This panel was lead by the Canadian Dalek Empire, members of the Doctor Who Society of Canada who built and operate their own functioning Daleks. These Daleks go around to appear at conventions like Fan Expo, charity events and other localized promotional appearances (The Space Channel’s special for The 50th Anniversary of Doctor Who, for example). The idea of “Through the Eyes of a Dalek” is less about the experience inside a Dalek suit but more so the members’ experiences meeting kids, parents and celebrities alike during their excursions out. Indeed, it was interesting for long-term fans of the Doctor but I did notice a number of people make their exit midway through the talk that started, when I arrived, as standing room only.

Karen Gillan has done plenty of work lately to plant her solidly as a star in the sci fi world. Not only did she play the iconic Doctor Who companion Amy Pond, but she shaved her head and took on the role as the villain Nebula in the Marvel franchise Guardians of the Galaxy. Gillan spent plenty of time discussing her experiences working with Matt Smith and Arthur Darvill on Doctor Who and the physical training she had to endure for playing Nebula (and of course, there wasn’t much she could say about Guardians of the Galaxy 2). She also discussed her work as a director and her role as Eliza in the short-lived comedic series Selfie.

When it came to fielding audience questions, I was surprised as to the number of kids (most of whom appeared to be under the age of 13) who approached the microphone to ask her questions about Doctor Who. It reminded me that the show is technically a children and family show that never actually feels that way considering the mature and complex subject matter that it covers.

To summarize Gillan’s answers: no, she is not in a relationship with Darvill who played Rory; her favorite Amy Pond episodes would be The Eleventh Hour and The Girl Who Waited; the other Doctor/Companion team that she loves is Billie Piper as Rose with David Tennant as the Doctor; she is unsure which historical figure she’d like to return to the series to play but she supposes it could be Jesus; and the idea of returning to the show as Amy Pond as a Dalek sounds like a lot of fun.

It’s been nearly 20 years since the first Scream movie was released spawning a sensational horror franchise that took a direct look at tropes within the horror genre. With four movies and a current MTV series on air, Fan Expo welcomed the original stars of the first Scream Neve Campbell and Skeet Ulrich. Joining them was another star that though fans of the movie won’t know the face they will certainly recognize the voice – “what’s your favorite scary movie?” Roger L. Jackson was the iconic voice of the Ghostface Killer.

A bittersweet air hovered over this panel as only days before, the legendary horror director (who also was the mastermind behind Scream) Wes Craven passed away. Many a fond memory of working with Craven was brought up confirming the idea that the people who create the most terrifying worlds are usually the kindest and most loving in person. Campbell had stated that without Craven at the helm, she wouldn’t want to return to her role as Sidney Prescott. Considering the evolution of the franchise and the current series, she doesn’t foresee a Scream 5 in the future.

Throughout the panel, a few interesting factoids were brought up – though Campbell and Ulrich had heard Jackson’s voice terrorize them on set for years, they had not met the actor until three weeks prior to the talk. This was something Craven had insisted upon to keep the fear real. Jackson is no stranger to voicing villains, from the Ghostface Killer to Mojo Jojo in the Powerpuff Girls. Finally, though Scream had received an R rating, Craven realized that showing steam rising up from the spilled guts of a dead body would push them over to an NC-17 rating.

Knowing that there would be an original cast member from MadTV in attendance at this year’s Fan Expo made Orlando Jones’ Q&A session a must see. Knowing that he currently plays Captain Frank Irving in the new horror series Sleepy Hollow sealed the deal. As anyone familiar with his work can expect, his talk was absolutely hilarious and had the audience all but rolling in the aisle for a good hour. Jones discussed growing up in a poor southern family where show business was something that just wasn’t done to how he gave up a potential career in sports to go into comedy. He detailed his years on MadTV and how he once got called out by Quincy Jones and Steven Spielberg for a seemingly innocent sketch he was writing. When asked what advice he would give to up and coming comedians his advice was simple: owning a cell phone with a camera means you can record your own work so record yourself, post it and get feedback. A fan asked Jones about his episode of The Haunting Of… where Jones detailed his stay in a haunted hotel and how the idea of it creeps him out to this day – which may not bode all too well with his current work on Sleepy Hollow, a show about the legend of the Headless Horseman.

It’s not the first time for the cast of the hit post-apocalyptic zombie series, The Walking Dead, has taken to the Fan Expo stage and with the momentum the show has been building and the ever growing fan base, it certainly won’t be the last. Kicking off the final day of the convention, stars Norman Reedus, Lennie James, and Chandler Riggs fielded many a fan question. Though many of the questions asked were in hopes of prompting a memory from seasons past (favorite quote, stunt, moment so far), the answers given were incredible vague – across the board, wait for season six. Apparently the upcoming season trumps everything fans have seen previously and, as Reedus discussed, feels a lot more like season one in terms of size and scale. The answers felt like a throw away, a way of building the hype for the upcoming season rather than discussing what fans have already seen, which is, frankly, why fans gathered for the early panel in the first place.

Cosplayer and Youtube star Meg Turney turned out a number of cosplay options for her time at Fan Expo including Chun Li from Streetfighter and a Mesmer from Guild Wars 2 that she wore during her talk. Many remember Turney from her previous position as a host for the YouTube news channel SourceFed which she started her Q&A discussing in detail the auditioning process and hoops she had to jump through in order to land her role. Unfortunately her requirement to cover world news took her away from her desire to cover nerd news which ultimately lead to her SourceFed departure. Currently, she’s living her dream as a host on the gaming YouTube channel RoosterTeeth while touring  conventions as a professional cosplayer in her spare time. During her panel, Turney answered questions about her favorite candy (cherry Pull-n-Peel Twizzlers and cherry Hi-Chews), what animal she would fight in order to get to said candy (a small daschund), and her experiences as a cosplayer and web-host.

Every fan of sci-fi television is familiar with the work of Gillian Anderson in particular for her work as Special Agent Dana Scully in The X-Files. Currently Anderson can be seen in The Fall as well as the television series for Hannibal before she reprises her FBI agent role again for when The X-Files returns next year. During her panel, Anderson was praised numerous times for being one of the first strong, intelligent, authoritative roles in television inspiring young women to take on leadership roles in business, sciences and medicine. She discussed the various roles she’s played and has been asked to play, including her current on-stage role in New York as Blanche in A Streetcar Named Desire. Anderson talked about her love of punk music and about her stance as a proud feminist. Her demeanor throughout her panel was smart, cheeky, and bordered on sarcastic in a great and endearing way. She capped off her talk by auctioning off a limited edition baseball cap signed by X-Files creator Chris Carter, co-star David Duchovny and herself for charity – it sold for a whopping $1000.

As the Fan Expo weekend drew to a close, it was clear that those in attendance seemed to have a wonderful and tiring experience. The celebrity panels were exceptional, the workshops and discussions informative, the elaborate costumes in top form. Already, people seem to be gearing up for next year’s convention that will hopefully come with fewer cancellations.