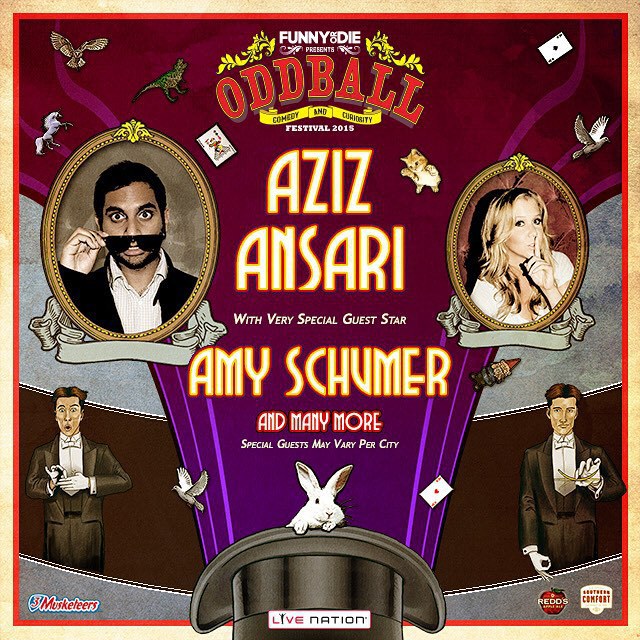 Funny or Die’s  Oddball Festival passed through Toronto last night – the only Canadian date on the six week long comedy tour – offering over five solid hours of stand-up comedy across two stages at Molson Ampitheatre. Co-headlined by Aziz Ansari and Amy Schumer, the tour features 20 other comics (including the likes of Dave Attell, Todd Barry, Jim Norton, and Tim Minchin) plus a handful of local comedians to work the secondary stage in each city. The catch is that, aside from the two main headliners, only 8-10 of the main comics are at each show so you’ll have to check your city to confirm the exact lineup and avoid being disappointed.

Despite the mainstage acts beginning at 7:30pm, thousands of patrons took advantage of the early doors to catch the show at The Redd’s® Apple Ale Festival Stage, which was hosted by Big Jay Oakerson and featured homegrown talent including Mark Little from CBC’s Mr. D and the lovably unapologetic shit disturber that is Rob Mailloux .

The early acts set the tone of the tour, which by all right was no secret from its name alone. Whether organizers consider the comics or their fans the oddballs is a mystery, but the content is quite obviously not for the faint of heart. This is not to say that every act was dirty or controversial, but it’s worth nothing when you can easily follow the trail of vagina jokes from Oakerson talking about his ex-girlfriends bush on the second stage all the way to Schumer’s 9pm headline set where she walks us through the first time she ever had to wash her baby niece’s genitals.

A good sense of humour was also quite useful in surviving the festival set up, which is the nicest way I can say that it kind of sucked. It’s one thing to grudgingly endure stadium prices for beer and snacks when attending a single headliner tour, but when you’re essentially trapped on festival grounds for several hours on end, $13 a pint becomes completely unbearable let alone the hour long lineups. I’ve never seen such sympathetic and apologetic workers, who were well aware they were understaffed and understocked. And then when you finally got to your seat after missing two acts in a row, the struggle to hear the comics over the loud echoing PA undermined a lot of the comedic gold that we were there for in the first place.

Overall, the tour is a step outside of typical comedy shows and that’s something worth appreciating in itself. The talent was excellent which is what matters most, so with a little bit of organizational finesse the actual tour is a hit concept with the potential to become an industry staple.

The Oddball Comedy Fest continues through ’til October 18 with the following dates remaining: