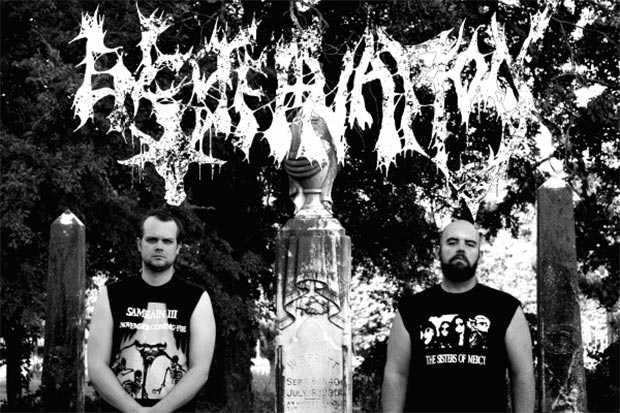 Ghoat is a funeral director. He’s also the guitarist and vocalist for the two-man metal band, Encoffination. His partner, Elektrokutioner (drums), and him released their newest album, III – Hear Me, O’ Death, on October 21st, 2014. Loaded with death/doom metal, this is music that seems to literally have been birthed in the bowels of a funeral parlour. Having only played 2-3 live shows to-date, mystery surrounds the band… at least outside of the gear Ghoat likes to use. Check it out.

What one piece of gear do you use to obtain your signature sound?
Ghoat: It’s a toss up between my two amps – a Peavey Supreme 120 and a RedBear 120. Both are very loud, high-gain heads from the ’90s: the Peavey is solid state and the RedBear is tube – all hand wired. RedBears were built in Russia for Gibson in the ’90s and made out of surplus military parts. They’re similar to a Sovtek. I bought the RedBear about 7 or 8 years ago and the Peavey was actually a gift from our drummer to me. I’ve used them interchangeably across all of our recordings; usually I’ll do the rhythm guitars with one and the harmonies and leads with the other. I also have an MXR Overdrive pedal I’m partial to, I run it in front of the RedBear for a little more bite. With Encoffination I’ve also always used the same guitar – an early ’90s Les Paul I bought from a friend of mine in high school. I’m left handed so guitars don’t just fall in my lap, haha, my friend had this one and we used to practice at his house (with a band I played in in high school) and this guitar was just gathering dust. We were both lefties so it just felt like it was meant to be. It was my primary guitar for years and years across several bands. When I started Encoffination, I had it setup to handle the G tuning and it’s always been my go-to. It’s heavy and thick and has 15 years of sweat, blood, and smoke soaked into it. 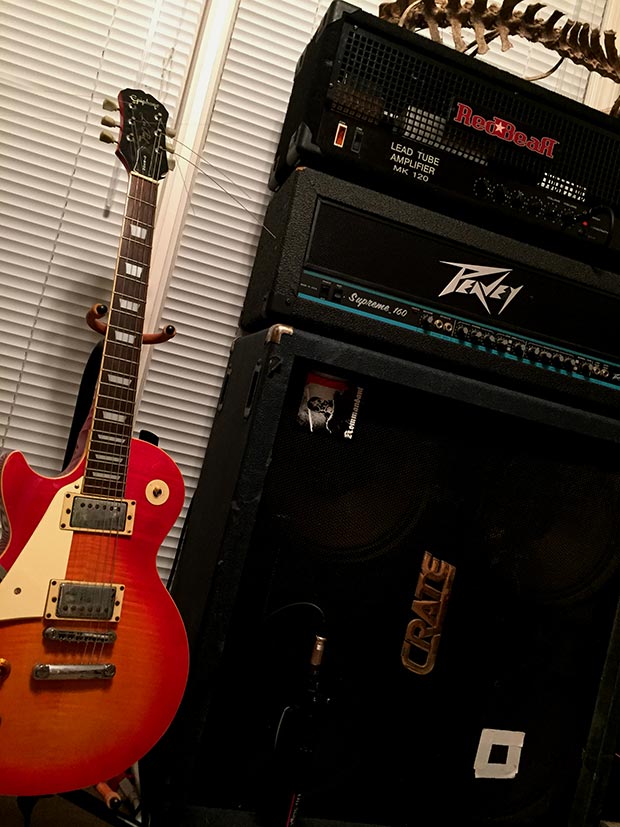 What about it makes it so important to you?
Ghoat: The guitar is important because it was the guitar I always wanted. Like most kids of the ’80s who played guitar, I was a huge Slash fan and always wanted a Les Paul. Mine may just be a cheap Epiphone, but it’s been mine the better part of 20 years. It’s neither my nicest guitar nor the best, but it’s what I’ve used for years. It has a feel and patina to it that I find comforting. These days I have guitars for various projects and the Les Paul has become solely my Encoffination guitar.

With my amps it’s their performance. Both are crushingly heavy, high-gain amplifiers perfectly suited to this kind of swampy, down-tuned death metal. The RedBears are few and far between, they don’t pop up often. When I bought mine, I had actually just discovered them. I was on the search to move from a rack system to a tube amp (trading digital for analog) and was pretty set on a Sovtek. In researching those, I came across a forum post about RedBear amps and lo and behold came across one on Craigslist and bought it. Best decision I ever made.

Wayne is an amp NUT and had two of these Peavey heads. They may even be late ’80s, I’m not sure. He played me a demo recording of his other band Decrepitaph, using the Peavey Supreme 120 and it was just this abysmal, murky tone that I fell in love with. Decrepitaph’s sound has always been due to Fender’s 500 watt Metalhead amps ran through 2×15 stacks, but this demo was a rehearsal of them with the Peavey and it sounded so old-school and oppressive. I guffawed enough about liking he just gave me one of the heads haha. It became paramount to Encoffination’s tone thereafter. 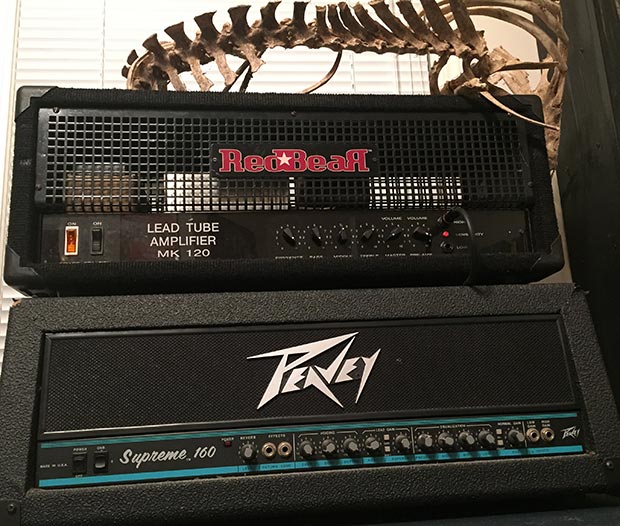 How do you recreate your album (guitar/vocal/bass) tones in your live set?
Ghoat: We’ve only done a couple of live shows and both times it was on borrowed amps. The first time we played, I ran through a full stack with a Rivera Knucklehead Tre head, which is the most obliteratingly heavy, high gain amp I’ve ever heard. Wayne has a couple of those too haha. Our only other show, I did play my Peavey head, but the tone didn’t come across the way I wanted it to. Something in the settings was off. Not being a band focused on the live setting, it takes a little trial and error to dial it in. We also played a big room that would have been better suited to a stereo setup. That’s my plan for future gigs (we’re booking some now), to run both my heads stereo to get a fuller sound out of just the two of us on stage. There is no bass live, and for vocals I just need them drenched in reverb by the house. I sing really low, both in tone and volume, so I need the mic really hot.

What are the major pros and cons?
Ghoat: The only con is that all this stuff is old, and I’m not a gear head. If something breaks, I have to get someone to fix it haha. The Peavey has a lot of noise in the pots. My guitar is beat to hell – I’ve had it rewired several times, but it still has its quirks and nuances that can be frustrating. I’m convinced that no matter how nice or expensive a guitar you buy (this one is neither); the input jack is eventually going to come unscrewed and fall out at the most inopportune time. Playing at such a low tuning has its own trifles as well. Even though my guitar is setup for the G tuning, it still needs constant attention. The pros are that they’re unique. I’m not a fan of buying what’s popular or just going to Guitar Center and buying the new hot amp. My stuff has character and feeling. 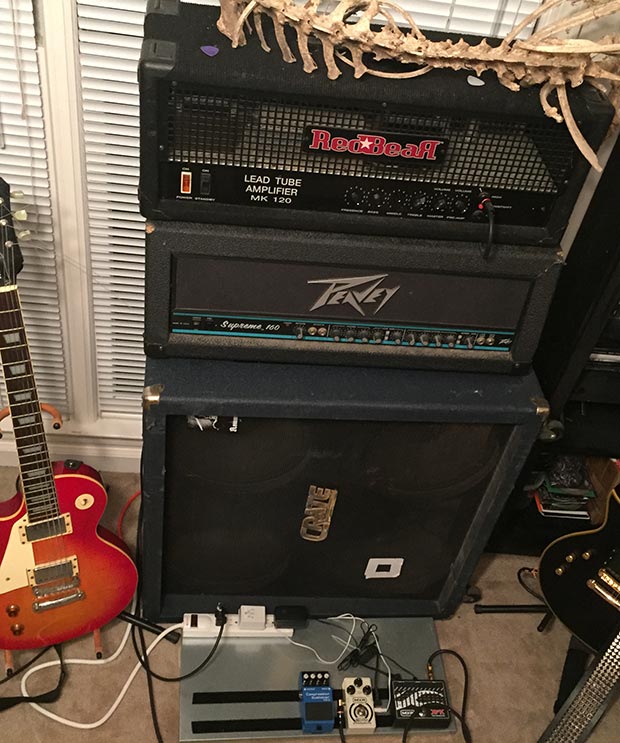 How long have you had it, how do you use it, would you ever change it?
Ghoat: I’ve had both amps for around 6 or 7 years and my guitar probably 18. As for changing them – even though they’re my “signature” pieces, I may. I actually bought a new guitar this year (after the recording of the new record) that will probably become my main guitar in Encoffination. It’s an ESP Eclipse EC-1000, matte black, gold hardware, lefty. I’ve mainly just been jamming on it at the house, but I am going to have it setup for the lower tuning soon. My amps will probably stay the same, but you never know. I doubt I would ever get rid of them, but a new amp is never out of the question.

Give us your best “gear goes wrong” story.
Ghoat: The RedBear used to notoriously blow fuses. In 2009 it blew once onstage, mid-song while playing with my other band, Father Befouled. I quickly changed it out, and we went into the next/last song of our set. Halfway through, it blew again and my amp died. By this point I was in a shitty mood – I’m one of those “my own worst critic” type people, so as soon as we start playing, I’m immediately like “oh fuck, we fucking suck, everyone hates us.” So that just fueled my rage. I throw my guitar down (everyone else keeps playing), sing the rest of the song, and then throw the microphone down on the stage and it pops. I hear “you’re gonna pay for that, buddy” through the PA from the sound guy: this huge, 250lb dude with a huge Steve Grimmet mullet.

I turn around, walk to my amp to break it down, and hear this guy yelling at me – I turn around and sound troll has walked from the booth, across the club, climbed onstage, grabs my shoulder, and sucker punches me right in the eye. As he punches me, he falls into me, and we fall into my amp, knocking it over, which in turn dominos into the full stack behind us. The headliner’s full Triple Rectifier stack goes crashing to the floor with this dogpile on top of it. This dude is trying to beat my ass – from under him I grab a handful of his hair and just start punching haha. Our bassist and drummer jump on him, eventually get him off of me and the whole thing gets broken up. I end up with a black eye and bloody knuckles, him with a bloody nose and lip. All because I broke his mic. His story ended up that I flipped him off after I broke it, which I didn’t, but oh well. I kind of wish I did. So we paid for the mic, packed our shit, and got the fuck out. All the equipment ended up ok, I had to smooth things over with the other band, etc… turns out I was using the wrong fuses the entire time.

Check out the song ” Charnel Bowels Of A Putrescent Earth”