Originally hailing from Dayton, Ohio, American hardcore/metal band The Devil Wears Prada has recently released a new full-length album entitled 8:18. Considerably darker, the album is wrought with existential and tragic elements. 8:18 includes the track “Gloom” which the band has been playing live for some time now. I had the opportunity to chat with songwriter and screamer, Mike Hranica, while he was in Edmonton, Alberta for their tour promoting 8:18. Hranica talked about the vision for this album, how Christianity plays a role in the band’s music, and the joys of bringing his Aunties and dogs along to ease the pressure and loneliness that comes with recording an album. Read on for an insider perspective on The Devil Wears Prada!

What has the past week been like for the band?
Hranica: Pretty good! We’re in Canada right now, in Edmonton. There’s close to a foot of snow and I love cold weather. The show is sold out, and everyone here is awesome. It’s sweet seeing snow for the first time.

Enlighten me on the name of the new album, 8:18.
Hranica: The title is based on Romans 8:18, which is a Biblical verse I came across a couple of years ago. I thought it could really stand as a lyrical foundation. The verse goes: “For I consider that the sufferings of this present time are not worthy to be compared with the glory that is to be revealed to us.”

What was the writing process like? This album is heavy, if not heavier, than Dead Throne, which you said in a previous interview was your heaviest album yet. I notice thrash elements as well as melodic.
Hranica: I don’t think our process has been much different compared to Death Throne. I think it was a refining moment for us. We like to make songs to best of opportunity and potential. We used the same writing techniques. Chris is the main songwriter. We go into studio with songs that are already recorded as demos, which mean we can refine, be meticulous and analytical. It was same thing. Our biggest concept with Death Throne was that we started playing around with Chicago and Kansas, you know, the slower songs. I know those two are my favourites from Death Throne. The other guys agree, so we wanted to write more ‘jam’ influenced songs, and I think we carried this into 8:18 in “War, Care More” and “8:18”. We played around within the post-hardcore arena, which is where I consider the songs to exist.

What has the general response been from your fans? I read a recent interview where you mentioned that you try not to let people’s opinions influence your song writing.
Hranica: Yeah, I can totally concur; it might have been me that said that. I don’t look too much at feedback and criticism. Not to be naïve and ignorant, I think looking too far into those things are too masochistic. So, yeah, I don’t ignore it, but I know the way my feelings should develop about my own material. I think it’s a very important part of making an album. I think there’s been a great response from fans I’ve talked to. I think that this record is more intelligent, with more levels to be understood. Hopefully, there’s been a blend of those elements and a good response from fans.

I noticed that there are less clean vocals in this album.
Hranica: Yes, it’s more organic. There was a collaborative effort where clean signing was prominent earlier in the band’s career. I wouldn’t say I have more control, but it might be the right thing to say. If I go back and listen to our older material, I would say that our clean singing is forced and more sterile. I don’t want that to be an extreme, I want emotion and rhythm. A lot of the time when I’m going about arranging the rhythm of the song, I feel it might be forced. I think what I do now covers those concerns to a certain extent. 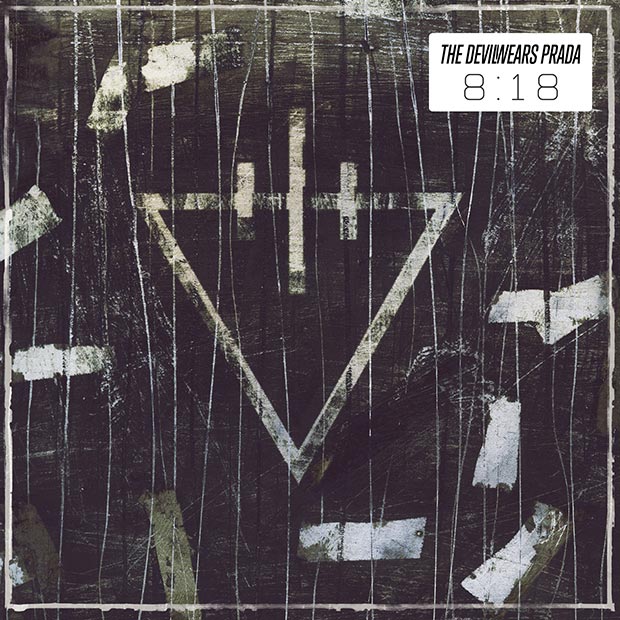 What made you/the band want to start the album off with the track “Gloom”? You guys have been playing it live for a while before the album release.
Hranica: We’re very analytical with our track listing. It’s one of most important parts of making an album. Often, it is underrated. If you have great collection of songs, you can butcher them by not arranging them properly. It’s much of the reason why our song are in the order they are. Usually, when we work on an album, I feel there’s always that song where we’re like, “yeah, this record needs to start with this song.” With 8:18, we didn’t have that until the end. When the idea of starting with “Gloom” was introduced, it was like, “Oh yeah, that would work really well.” The decision came naturally. I feel a little cliché and threadbare always stating this, but Defying the Great Line by Underoath was monumental to me as far as a record being able to slow down, pick up, and slow to maintain rhythm. Those principles are integrated in our decision on how we go about arranging records.

What was it like having two producers for 8:18?
Hranica: Adam and Matt have both worked on number of Underoath’s records, which is great. I wouldn’t say it complicates things, but you lose some simplicity. There were different troubles this time around that we never had before, I think mostly because we never had a record mixed without our producer. There were lots of hands in the pot, but I don’t think it directly took anything away from us. I think the world of Adam, and him being our executive producer. He made sure and knew it wasn’t his record, it was Matt’s, and he couldn’t have done a better job in filling that role. When it came down to it, it was Matt’s decision.

The lyrics on 8:18 are beautiful, existential and sad, more so than previous album. There’s this theme of looking for God and acknowledging that he is there, despite the darkness of life. What is this reflective of?
Hranica: Yeah, I think that’s precisely it, you’ve got it. I spent a long time in suffering. I like to read. Most of stuff is usually French existentialism and this bleeds into my writing; I love that sort of philosophical view. Yeah, in 8:18, I ask why we suffer. I thought that it almost sounded like I’ve been losing faith, but really, to me, that’s what makes my faith stronger. There’s this idiotic side of Christianity, where you intentionally are ignorant of all the evil. Being able to know what’s going on in the world makes you a better Christian rather than being blind and dumb. I think it’s reminiscent in my lyrics. To question God is part of our faith.

What has been your favourite place to tour? Which city do you look forward to playing in?
Hranica: You’d get a different answer from different members of the band. We all really love California, Texas, Toronto, and Chicago. We live in Chicago, and the shows are really energetic and fun. I love Toronto, I think it’s a fantastic city. London has also really grown on me. Australia, Germany, and Russia too! Russia was fantastic, high energy, and culturally very eye opening to see what’s happening there and how people are! Ireland was also incredible.

Check out the song “First Sight”

How have religious themes played out in this album?
Hranica: I think that our newer material confronts our Christian ideals. I know it exists, and being a little less confrontational it feels more honest and most directly from my heart, which is how I’ve always done it. God looks for me to express myself, and I find reason in that by being less up front. I can say with most confidence that this ideal still exists in the lyrics.

You guys recorded in Atlanta at Glow in the Dark studios. What was the recording environment like?
Hranica: It was good. There was a lot of stuff to do. I realized I hate Atlanta traffic more than anything. We had a house we rented, it had five bedrooms, and I actually drove my car down from Chicago and brought my Aunts and dog. Being able to set up a community was nice, it alleviates stress and tension when making an album.

What’s it like being connected with Roadrunner, and having your album released through them?
Hranica: Its been awesome! We kind of felt like we were in purgatory for a bit with Death Throne and With Roots Above and Branches Below. A switch of this team is highly beneficial. I feel strange saying nice things because I feel like everyone hates the label, but it is great working with them. We’re in direct communication with these guys, they’re super cool and they definitely have their hearts in metal music.

How has the lineup change affected you guys? Was it a positive change? I believe this is the only member change you’ve had happen.
Hranica: Yeah, a lot of people don’t know this but it was our decision rather than the other way around. I wish James the best, and I can’t speak highly enough of him, but we knew it was time to part ways. We’ve bee developing and what we began progressing into highly contrasted with what he wanted, and how he felt on tour. Parting ways was the best decision for everyone.

Check out the song “Martyrs”

When did you first get into music and realize you liked heavy vocals?
Hranica: I remember when I was a kid I was into heavier music. The more we found, the more we would like it. That was our transition into hardcore, and metalcore. Chris and I played in this joke band, which is how I knew I could do these vocals. Next thing I knew the Devil Wears Prada wanted me to join. I remember screaming songs in the car with my friends, going to shows, and listening to listen to old metal bands.

Do you have a certain warm up routine? It must be so strenuous preparing for a couple hours of screaming every night!
Hranica: Yeah, I do certain warm ups and I always have to have water on stage. It helps the vocal chords not tighten up. These days, as defeatist and apathetic as it sounds, voices just go and there’s nothing you can do about it. It sucks, and there’s lots of pressure, and it feels like… helpless, and I think that comes with the style and the genre.

What have you been listening lately? What’s on your iPod today?
Hranica: I’ve actually not listened to much music on this tour. I mostly try to read and watch sports, I’m big into hockey, basketball, and football. Savages put out an LP called Silence Yourself. One old record I keep listening to is Joy Division’s Unknown Pleasures. A lot of post-punk stuff, I’m loving right now. There are a lot of records that just came out that I haven’t gotten yet. A lot of dark material, that’s for sure.

Awesome! Do you have anything to say to your fans?
Hranica: I just wrote my second publication called ‘Home for Graves’, it’s a story based on the song off 8:18, and the character within the song. Jeremy and Andy are doing photo blogs for Alternative Press, and we’ll have video footage of the tour soon. I’m writing a weekly death metal blog for those interested.