Check out the song: “Life In A Shoebox”

Just Visiting is not just another new and up and coming rock n’ roll group. The New York City band is truly one of a kind as it describes itself as a “bilingual” band with songs performed both in English and Spanish. The band was formed by leader Johnny Roset Cervini over a decade ago but they just recently really got down to business on writing and recording. The result is the band’s first self-titled EP and first ever music videos with a video for the song “You’re So Pretty” on the way soon. We spoke to the band’s lead singer Johnny before the end of 2011 to learn some more about Just Visiting and what the group has in store for 2012. Expect to see the band on tour in April throughout the East Coast of the United States.

First of all, tell us how the members of Just Visiting met and why you decided to form a group.
Johnny: The band began when I ended up in the same dorm building as rhythm guitarist, Mike Burke, at the State University of New York at Geneseo. This friendship and common interest shared in the guitar would serve as the basis for Just Visiting for over a decade. Upon graduation, we both went back to our respective hometowns. I was from New York City while Burke (Mike) was from Yorktown Heights in Westchester County, NY. Finding the band’s bassist wasn’t at all difficult as Mike’s own younger brother, Dennis Burke, would helm bass duties.

Finally, and before securing the investment that helped me properly launch the label, and as I was desperately trying to find a day job that would work out, I met Michael Demetrious at New York Real Estate Institute. Both Demetrious and I were pursuing, and successfully attained, real estate licenses in New York State. Upon discovering that Demetrious was a drummer, it became crystal clear to me that Demetrious’ drumming was the missing link to complete the final and current lineup of Just Visiting.

Now the origins behind the band are interesting since you formed the group over a decade ago yet you just recently really started to get going with your music. What took so long in terms of getting this band off the ground?
Johnny: I’ve always said that forming a band is like having a lot of girlfriends at the same time. It’s tricky. Egos are sometimes bigger than the people that they dwell inside of. I’ve always been the lead songwriter in the band, and that hasn’t sat well with others. I write a song in a specific way in my mind, and, once it’s there, I don’t accept input on changing the structure of it. I, of course, let my bandmates do their thing creatively, but once I write a song, from a very core perspective, it is written. So, it took time to iron out character clashes, personality differences, and other assorted problems that ultimately register as the growing pains of any band.

What type of music were you into growing up? I’m guessing mostly classic rock type stuff?
Johnny: Honestly, I was into Michael Jackson, first and foremost. Then, I was into a lot of Albert King, Robert Johnson, Cream, and anything with Eric Clapton involved. It poured over to the actual Down South Blues that I figured out that Clapton was a natural at channeling. My musical roots are found in blues and hip hop. Rock came in my first year of college. It wasn’t until then that I figured out that this Seattle-based band named Nirvana even existed. 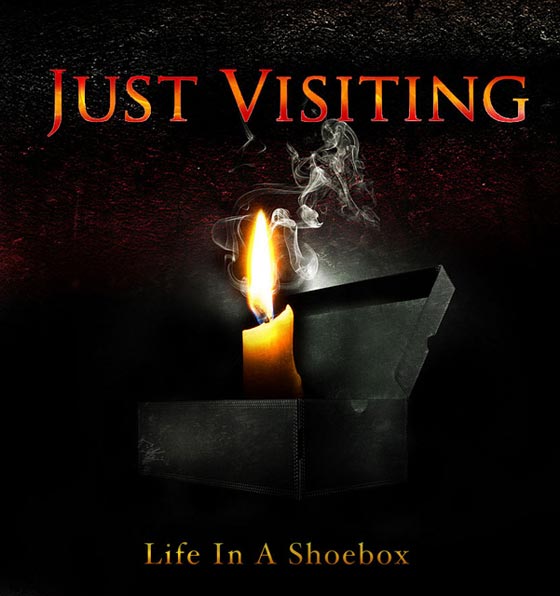 Just visiting is referred to as a “bilingual” alternative rock band, not a description you hear every day for a rock and roll band. How does this manifest itself in terms of your songs and the vocals?
Johnny: To me, the answer is simpler than the question. I just write in Spanish if the song is about a Spanish girl I broke up with. And if it’s a White girl or an Afro-American girl, then I write it in English. I’m hoping not to break up with a French girl anytime soon, because then I’d have to brush up on my French skills.

Over the years you’ve gone through several member changes with members coming and going fairly constantly. Are you confident that this current edition of the group will be together for a long time?
Johnny: Yes.

The band hails from New York City, obviously one of the rock and roll capitals of the world. Are there other, similar sounding bilingual bands also coming out of New York?
Johnny: No, just us!

Your self-titled EP is now out. Are the songs on it recent creations or have some of them been hanging around in one form or another for years now?
Johnny: Some have been lingering for years, but money brings things to life, and my music, past and present, is no exception.

Check out the song: “Life In A Shoebox”

Your first two videos debuted this year for the songs “Glass Of Whine” and “Life In A Shoebox” and then more recently “Para Ti.” How much involvement did you have in the making of these videos?
Johnny: I am incredibly hands-on when it comes to making videos. I always have a basic treatment in my head and then the director fleshes the idea out. I am very excited that for our next video, “You’re So Pretty,” I’ll be handling directing duties in full for the first time.

What are your touring plans like for the near future? Where can fans expect to see you?
Johnny: We will be going on a six-week tour in April 2012. We will cover relevant venues and colleges along the East Coast.

What else is in store for Just Visiting in the future? What can we expect in terms of new music or other plans?
Johnny: You can soon expect us to be assisted by a major record label in our distribution efforts.