I recently had a chance to speak with guitarist Robby Rigsbee about his band Zach Williams and The Reformation and their new disc, A Southern Offering. The moment you pop this album into your player you’ll immediately be transported back to the mid-Seventies when southern rock ruled the airwaves. Not only do Zach Williams and The Reformation pay homage to the masters of the genre, (Lynyrd Skynrd, Molly Hatchet, Joe Cocker), they also add their own sound to the mix, making this an interesting and enjoyable release. Here’s what Rigsbee had to say.

Now that your brand new CD, A Southern Offering is complete how do you feel about it? Are you satisfied with the outcome?
Robby: Very Satisfied! This album was so much fun to make; we had a lot more direction with Kevin Beamish, it was a very quick album. We didn’t nitpick every little detail and it only took 5 days to make it.

Different groups have unique ways of writing their songs. How do you guys go about writing your music? Is it a collective effort or is it more the efforts of one particular member of the band?
Robby: Well, that’s another reason we feel this album is more special than the last one. On the first record, Zach wrote most of the entire album with little help from us, and on this one, it was a total collaborative effort. Most of the time I would come up with an idea for a song and bring it to practice and we would build it together or we would just jam out ideas and that’s how the song “PO Box” came about.

Are there any tracks on A Southern Offering that are personal favorites or that have good stories behind them?
Robby: My personal favorite is, “Picture Perfect”, it’s the most well written song and the lyrics are beautiful, it’s a song about some stuff that Zach or people that are in bands are forced to deal with. Then there is “Gravy Train” which is a great energetic song about an ex-band member that quit when there wasn’t enough money coming in.

Every band has its musical influences. What are some of the other bands and artists that have greatly influenced you guys and your music?
Robby: All the classic groups: Allman Brothers, Black Crowes, Bad Company, Free, Zeppelin, Tom Petty, Govt. Mule, ZZ Top, Leon Russell, Joe Cocker.

If you could jam with any famous musician, dead or alive, from any century, who would it be and why?
Robby: Personally, mine would be Duane Allman; I’ve read his book, ‘Sky DOG’, and he seemed like a true humble guy that seemed to be into music for all the right reasons.

How quick are you in the studio? Can you usually knock things out in a couple takes?
Robby: I think it really all depends on the vibe of things, I’ve knocked takes out in a few takes and then there have been days where I’ve had to quit and come back to it. For the most part though all the guys in group can knock stuff out in a few takes. Zach did his vocals on the new album in two days.

When you are out on the road anything can happen and often does. Can you think of any disastrous events that happened while out on tour? How did you solve the problem?
Robby: We were in Spain once, and our van broke down. No one knew any Spanish… we found an auto repair shop, but couldn’t translate anything, so luckily after an hour of playing the guessing game our driver, (who was Dutch), figured out the mechanic was fluent in Dutch. However, that still didn’t help because he didn’t know how to repair the belt. So, we convinced him to let us borrow his tools and our handy man drummer; Creed, fixed it.

What artists would fans be surprised to find on your iPod?
Robby: Mine would be: My Morning Jacket, Hank Williams Sr., Radiohead, and Arcade Fire.

Tell me about a book or two that you’ve read that you think other people should read?
Robby: I love books about musicians and bands. The best two I’ve read are ‘SkyDog,’ the Duane Allman bio, and ‘This Wheels On Fire’ by Levon Helm.

If you had not become a musician what other career path would you have liked to attempt?
Robby: Maybe a doctor, my whole family is in the medical field.

If you were a superhero, who would it be and why?
Robby: Batman, because he kicks all the ass.

Any closing words?
Robby: Thanks for chatting with me! 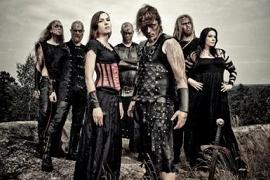 Battlelore interviewed on The Governor’s Ball 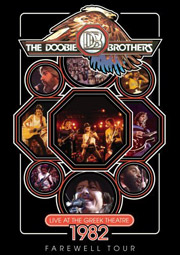 The Doobie Brothers – “Live at the Greek Theatre 1982” [DVD Review]