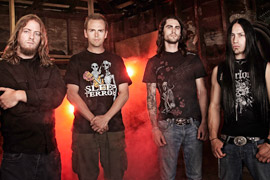 World Under Blood: “Five Years in the Making”

The tale behind “new” melodic death metal band World Under Blood has a sort of “long time coming” sentiment attached to it. Although the group is just set to release its debut record Tactical in July, World Under Blood formed all the way back in September 2006 in a chance meeting between CKY guitarist Deron Miller and drummer Tim Yeung at the Rainbow Room in Hollywood. After getting to know each other that night and realizing that they were both big fans of each others’ work, Miller and Yeung decided to form a melodic death metal band.

After some quick rehearsals, the two of them came up with a three song demo in 2006 and played all of the instruments themselves. Despite the writing chemistry that they had quickly discovered with each other, the project almost never had the opportunity to get off the ground thanks to a strange call Deron received from Fear Factory guitarist Dino Cazares. He told Deron that Tim was not a good person to work with and should be avoided; all the while this was really just Cazares’ way to pry Tim away for his own band Divine Heresy.

Despite Cazares’ efforts, Tim was able to commit to both bands and World Under Blood recorded their three song demo. The initial response to the three songs was staggering when they were posted on a MySpace page for the project. From those three songs came a message from someone who told Deron to check out the guitar skills of Luke Jaeger. After seeing some YouTube videos of Jaeger playing guitar, Deron was thoroughly impressed and was able to arrange a meeting at which point Jaeger quickly joined this new, developing group. The recruitment of a bassist came a little easier when a friend of Tim’s, Risha Eryavec of Decrepit Birth was asked to join after Tim checked out a show Risha was playing.

With a stable line up intact, the band set about writing a debut record in late 2007. Song writing was going well until a reunion took place between the members of CKY after Roadrunner Records began demanding the band release an album. A very long touring cycle put World Under Blood on the very back burner which delayed the release of their album for three years. It was not until CKY finally got off the road and parted ways with Roadrunner in 2010 that World Under Blood got back to finishing their debut.

Although the song writing process had been essentially completed, the finished product was delayed even more as a result of the outrageous amount of work that Deron had taken on. Amazingly, Deron finally finished his vocals and Tactical was mixed and completed in late spring. The record, which features a cover of the Megadeth song “Wake Up Dead” will be released July 26th in North America. It’s been a long time coming but World Under Blood is finally a tangible live band and no longer just a potential project. Let’s just hope Deron is able to balance his daybook a little better now than he has in the past.

strong>Check out the song: “A God Among The Waste “