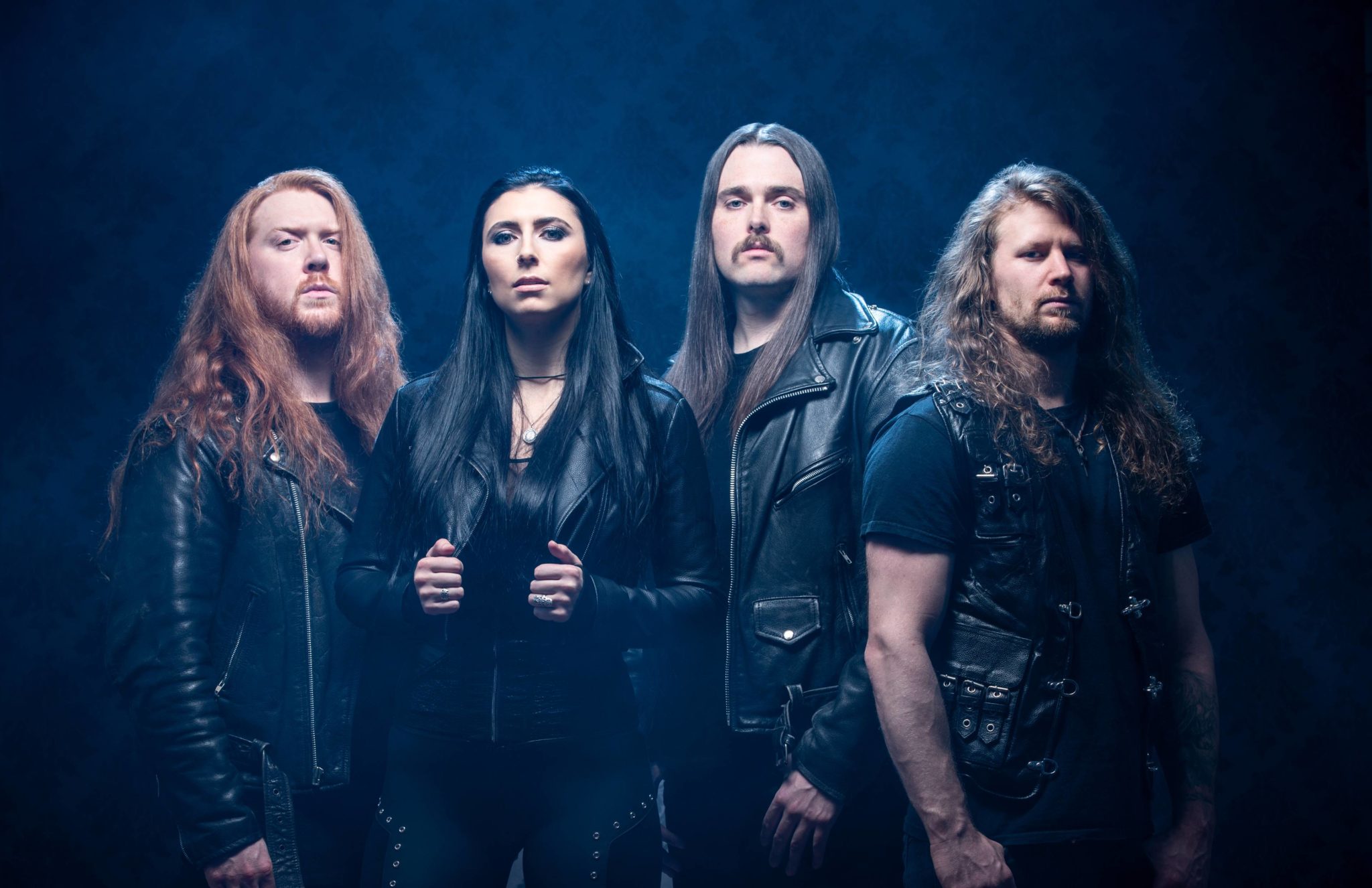 Unleash The Archers recently embarked on their two month trek entitled “Tour Through The AstroWaste” across Canada. During their stop over in Oshawa, Ontario I managed to meet up with vocalist Brittney Hayes and ask her questions about the history of Unleash The Archers, their new album Demons Of The AstroWaste and… a metal Sasquatch.

How’s the tour going so far?
Brittney: Really good actually, turn out has been amazing. Actually starting in Victoria was our CD release all the way over here to Oshawa it has actually been a pretty good time, lots of good shows.

Awesome. Anything crazy happen on the tour?
Brittney: Ahh, well actually it’s not too crazy, but we played a house party on Saturday night and that was a lot of fun. There were two kegs and our buddy sectioned off their living room and kitchen area for the band and everything and we have a really good time and we actually blew their power. It’s pretty funny, we got all the way through our set and then we busted into this really heavy breakdown in the song “General Of The Dark Army” and just everything popped. We were all done and we blew a fuse in their power bars or something like that had all the backline and everything connected to it.

You have been around for awhile. So how did the band actually start?
Brittney: In late 2007, Scott and Brayden our guitars, perspectively drums and guitar, they were in a band together that broke up. So Scott and I were dating at the time and when he came home he said “oh it’s done” I was like “Alright let’s call Brayden” and we started a band the three of us and we found Zack, and our old guitar player Mike on LiveVictoria, which is like a website for musicians in the Victoria scene. Mike left actually at the beginning of this year and we found Grant cause we played with him in a different band called Archon Legion. When that band broke up we were like “Come on over”. So we stole him from them, so yeah that’s were we are right now.

So where did you get the name?
Brittney: [laughs] Wow, that’s a pretty horrible story actually. About a month or two after we got together and were jamming and everything, we knew we were going to start playing shows right away and we wanted to get our live playing in gear and stuff like that. So we were like “we need to decide a name”.

Three months later, still hadn’t figured it out. We had a word document about 16 pages long of name of just after name after name and no one could decided on. There would be one that all of us would like except for one person and then Uhh. So finally someone threw out Unleash The Archers, I can’t even remember who said it or what it was, but all of us were like “Hey, yea, alright I could live with it” and as soon as all five of us said “yeah that’s alright” we were all like “Okay that’s it were not thinking about it anymore”. We all wanted it to be something we all personally liked. I wanted it to be something epic and Scott wanted some pure literary sound.

Well it’s got a power metal sound… Unleash The Archers.
Brittney: Well like you’re standing on the rampart and the barbarians are coming to invade your castle. What’s the first thing you do? You unleash the archers.

So you just released your new album Demons Of The AstroWaste. How’s the reception been so far?
Brittney: Pretty good actually. Our first album was just a bit of a tester, an amalgamation of all the songs we had written at the time. Well not all of them, we cut quite a few. So this one was more a sit down, write the album and is a really good representation of the band right now and all our different tastes. We really actually sat down and wrote it all together so it incorporates all our different sounds and personal interests and stuff.

I know a lot of our fans were waiting for an album to be written, you know what I mean, not just the songs we play for something new. I think it’s been taking pretty well so far and we had a really good time recording it and playing it. We live playing it. That’s what’s important. You know when see you up there having a good time playing it.

Well that just makes the show even better. Don’t want the show to be boring. So where did the name of the album come from?
Brittney: [laughs] That was Scott actually. We knew we wanted a concept album set in space in like future past so he came up with Demons Of The AstroWaste just sort of like…Cause AstroWaste is a really cool word [laughs]. No, it was based around what the story was becoming, about this guy becoming taken over by this sword and his inner demons becoming embodied in this weapon that he found and his struggle between his two egos. Demons Of The AstroWaste just sort of fit. It was all Scott right there.

So what’s your favourite song on the album?
Brittney: My favourite is probably “Battle”. “Battle In The Shadow (Of The Mountain)” I really like that song. It’s really hard to sing, I don’t know why. On this album I really challenged myself and I wrote a lot of vocal parts that I really have to warm up. I really pushed the limits. That one is still comfortable for me, but it’s also really heartfelt. I really love that song.

So what is the writing process for average song of yours?
Brittney: Brayden will usually write a few riffs and bring them out to us at jam, and we’ll write them up on our board there and we give them silly names. Then we all write around the riff and piece them together and put little filler parts to merge one to another and create a song of what Brayden is playing in his head at the time. We all right our parts around it basically.

On this album there were some where Scott had a song and he was like “I want it to sound like this” and he and Brayden wrote together. “The Outlander” was actually the same with Brayden and I, where I had the chorus in my head and I was like “Write to this”. That’s how a couple songs came up. Most of the time Brayden will come with the riff and we write to the riff.

I watched your music video for “Dawn Of Ages”, who came up with that concept?
Brittney: [laughs] actually it was a friend of ours from Vancouver, Nate Sandulac, who’s a good friend of ours. He and his buddy Jonnah were loaded one night and they loved the sasquatch t-shirt, which was our design from the last tour. They were like “You need to incorporate him into your video somehow. He could kidnap you all or something” so we sort of grew from there. We got our buddy Aaron to tape it all for us, he’s got the super nice camera. We just spent two days up in Hope running around like idiots at a provincial campsite. Had a really good time.

So whats your key thing you have to bring to go camping?
Brittney: Music. Someone’s got to have an iPod dock or open even open the door to your car, there’s got to be music. I am not a fan of the bringing out the acoustic guitar and singing “Kumbaya” around the fire. I don’t even care if you’re playing Tenacious D.

If you ever saw a Sasquatch on tour, do you think your music could tame it?
Brittney: [laughs] Oh, hell yea. He’ll head bang to that, we know, hairy Sasquatch. He’s a friend of ours, we hung out with him in our music video. He heard our amazing tunes and had to have a piece.

So after this tour when you go back home, what will you do with your time?
Brittney: We are going to take a little break. Grant our guitar player is going out on a three weeks with his other band. Then we will play a few Vancouver shows and hopefully get out to the states. That’s out main focus right now is getting a tour in the states.