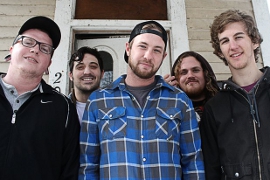 I recently had a chance to catch up with vocalist Trey Sexton of the band Kid Liberty while they had a day off from touring. The band has been busy on the road in support of their latest disc, Fight With Your Fists. Here is how the conversation with Sexton went.

Now that you have had 6-8 months to sit on your latest release are you still satisfied with it?
Trey: I don’t know man. I mean I think the kids have caught onto it for sure and every tour that we do it gets bigger and bigger. I think it took us to a new level for sure but I am also ready to put out a new record and do it all again.

You had a pretty good reception for the disc, didn’t you?
Trey: Yeah, I feel like we did. We were kind of nervous about it because we recorded it in about a week and a half because we were being rushed and we finished it the day we left for tour. I mean we literally left the studio and hit the road to go out on tour. We are happy with the outcome for sure and yeah the reception has been good I think.

Do you have a favourite track on the record?
Trey: That is a hard one because I don’t want to sound vain or anything but I like them all.

When can fans expect some new material from you guys?
Trey: I think the label is going to re- release an old EP of ours that we did about three years ago and we are going to add three acoustic songs on there as well. We have already started writing and we will probably be back in the studio this fall to record the new record.

When you guys write do you all write together or is it typically more the efforts of one particular member of the band?
Trey: We definitely all write together but we do things in different ways as well. Sometimes one of the guys will just completely write a song but most of the time we collaborate in practice.

You guys are going out here for a month long tour but what do you have planned after that?
Trey: I don’t really know. I am not really sure of there are any real solid plans yet.

How do you keep up with the physical demands of a tour? Especially with the weather getting warmer here?
Trey: I think playing just sort of keeps us in shape. We are pretty active when we go out on tour. Usually everyone in the band loses weight while out on tour. We have dumbbells and stuff with us but usually everybody in the band just talks about doing that stuff.

Do you enjoy being out on the road?
Trey: Yeah I enjoy it. It is one of those things that I look forward to every time but after a month and a half of being out there I am ready to be home for a little bit as well.

Can you recommend a book or two that you have read that you think others should read?
Trey: I definitely would recommend the Charlie Pride autobiography, Pride.

If you had not become a musician what other career path would you have liked to attempt?
Trey: Oh man, that is hard because I have wanted to do this since I was a little kid.

What three words best describe Kid Liberty?
Trey: Probably Batman, he doesn’t really have any super power but he is a badass for sure.

Any closing words?
Trey: Come out and see us on tour we would appreciate it. We would love to see everybody out there having a good time.