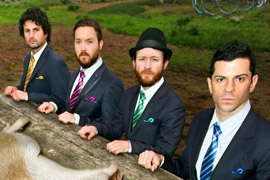 Dredg vocalist Gavin Hayes took some time out of his busy schedule to speak with me about the band’s newest release, Chuckles And Mr. Squeezy. On this CD the group takes an intentionally different approach to writing and recording, and while the result is a departure from their previous works, it’s a solid work in its own right. The band will be quite busy for the remainder of 2011 with a series of headlining dates in the United States followed by dates overseas with Linkin Park, System Of a Down and a number of festival appearances. Here’s how the conversation went.

Now that your newest CD, Chuckles And Mr. Squeezy is complete, how do you feel about it and are you satisfied with the outcome?
Gavin: Yes, I am. Our main goal was to explore our creativity a little bit and branch out. The last thing we really wanted to do is just make another rock record. I know we were looking to try something new on this record and I am very happy with the way it turned out.

What was the writing process like for this record? Was it a collaborative effort or more the efforts of one particular member of the band?
Gavin: This one was a little different because I was living in Seattle at the time so a lot of it was written remotely by trading music online and by email. I did fly down to California probably once a month so we could get in a room where we would do a lot of writing as a band. It wasn’t really different from the way we have written in the past other than the fact the more than the normal amount of songs were written remotely.

Did you find it more difficult to record in this manner?
Gavin: Honestly as the vocalist in the band I kind of prefer it in some ways. Obviously being in a room writing as a band brings forth a little bit more energy whereas trading music online kind of outs things under the microscope a little bit more. I can write melodies on the spot and it is easier for me to hash out lyrics and try out different melodies and such. We want to get this record out as quick as possible we took at least three years on the last record and kind of felt it was detrimental to us as a band. We did everything different this time and really tried to expedite the process and we wrote it and recorded it on less than three months and that was our quickest to date.

Really? It only took three months?
Gavin: Yeah we were really only in the studio for two days. We have a home studio where I was able to do my vocals at. Everything was a lot more spontaneous; we recorded everything live and it was kind of a different push on this one.

Did you guys write a lot of tunes that did not make the record?
Gavin: Yeah, there are at least four songs, possibly five and another five songs that are not really complete yet but are just extra material.

What is the significance of the title?
Gavin: Well actually it started off as a joke with the engineer we were working with. We were talking about old jobs and he mentioned something about some old rodeo clowns named Chuckles and Squeezy. We were laughing and thought that would make a great title. A few months went by and we were trying to come up with a name for the album. Everyone had a bunch of titles that no one could agree on and we felt that it worked well with the artwork that we already had based on a Dr. Jekyll and Mr. Hyde kind of idea.

Are there any tracks on the disc that are personal favourites or that have good stories behind them?
Gavin I really like, “Down Without a Fight” and “Another Tribe”. I kind of find myself attracted to songs that I think are way different for us. As the creator and out of my selfishness I tend to veer towards the songs that are newer for us.

When you first started out did you ever imagine you would be recording and releasing records 17 years later?
Gavin: No, not really. We never envisioned our band getting as far as we have. It is pretty amazing to see how much growth we have gone through as musicians, as a band and as people. I think it is pretty rare to see the same four people stay in a band for as long as we have and continue to pursue an idea for this long. At the end of the day I am extremely happy with all that we have achieved and I feel very privileged to have been able to do this.

What kind of touring plans do you have in support?
Gavin: We are going to be playing for a month or so in the United States and then we head overseas for some headlining dates as well as some Linkin Park and System Of A Down dates.

Any closing words at all?
Gavin: Hopefully people enjoy the record and hopefully they can listen to this record with an open mind and see it for what it really is; a band that has been together for 17 years and really wants to explore new avenues. I hope people enjoy it I am proud of it and I hope they can see it the way I do.