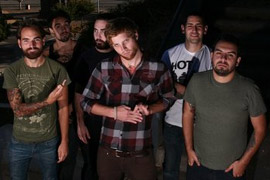 Check out the song: “Avdotya”

We were fortunate enough to see Arsonists Get All The Girls during the Oshawa stop of their recent “The Canadian Rehabilitation Tour”. Keyboardist and backing vocalist Sean Richmond gave afforded us some time to talk about the group’s latest album Motherland as well as touring across Canada.

How is the tour going so far?
Sean: The tour’s going great man. We’re kind of scared to come out on the road on this tour cause we’re missing a couple members on this tour. They’re at home right now taking care of some personal stuff that really needed to be taken care of, so we are out on this tour as a four piece.

Who’s missing?
Sean: Jared our frontman and Arthur Alvarez our guitar player. I am filling in for vocals right now; keyboard and vocals. We have been getting a lot of good reviews back and comments and we’re pulling through. Jaeson our other guitar player is running two heads and two cabs so it sounds full like a band. But yeah it’s going well. We’ve been getting a lot of positive feedback.

So the four piece is doing well?
Sean: It’s doing really well. People have been saying it’s more grindcore. As opposed to the full band which may have its more structured sound. It’s more chaotic and bit more grindcore-ish. We like it and we are having a lot of fun.

That’s awesome. So you have just released your second album with Arsonists Get All The Girls. Was the writing process for you easier this time around having been with the guys for about 2 years?
Sean: Definitely on the new album Motherland we came together as a band better. Everyone’s head was full force into the writing process and on Portals that was like just when I joined the band and so I was just getting to know the guys and getting to know what it’s like to write for Arsonists Get All The Girls. But definitely Motherland was a lot funnier because we put way more keyboards into it and I recorded vocals in the CD and I didn’t on Portals.

How do you guys go about writing your music? Is it a collective effort or is it more the efforts of one particular member of the band?
Sean: We go and rent out a rehearsal space and we don’t really do any pre-production at all. We do some video pre-production just to get some structured melodies for vocals. Nowadays I see bands write out their whole album on a Macbook and that’s definitely not what we do. We do a total punk rock way, we just go into a garage and Arthur will come up with like a crazy riff and then him and Garin will be fucking grinding it out. I will then throw in some fuckin’ trippy keyboard part that I wrote so that it transitions into something else.

Maybe Jaeson our other guitar player will have some riffs in the back of his head that he’s like “Oh shit this would sound gnarly.” We all come together with ideas. Greg our new bass player on Motherland has been doing a lot of fuckin’ creative shit on bass to which we’re really stoked on. That being said there are two vocalists on Motherland but Portals had one vocalist. Motherland all together was much more chaotic and we brought in way more into this album.

So where did the title Motherland come from?
Sean: We did a lot of extensive touring in Russia and we did like 12 or 13 days in 2009 and those are pretty fuckin’ hard dates to tour cause we were all on trains. None of us really ate a lot. There wasn’t much money being passed around for food. It was like 12 solid days of traveling in a train, 18 to 19 hours per day and being off the train for like 3 to 4 hours to go from the train to the taxi to the venue to the taxi to the train. We are all hauling all our equipment and luggage so it was really exhausting. After we did crazy tours like that, we really became closer as a band so felt our experience in Russia really helped our process in titling the record.

What topics do you bring up lyrically?
Sean: Actually Jared our main vocalist pretty much does all the lyric writing. The parts that I do I’ll write something around what he’s written. I couldn’t really tell you where the origin of all his lyrics came from.

I haven’t seen a music video for this release yet. Are you planning on releasing one soon?
Sean: Yeah, we have some pretty fuckin’ wild ideas. We’re going to do some really weird shit hopefully. We don’t really have much of a budget, or any budget for a music video so our friend Joey who did the video for “Shoeshine For Neptune”, he’s going to be doing this video again. He’s a really good friend of ours so he’s not really going to charge us anything and we appreciate all his help. Without him we wouldn’t be able to release one. So if it’s anything it’s going to be low budget, pretty funny, silly music video like Arsonists Get All The Girls.

Who drew up the album cover for Motherland?
Sean: Josh Belanger, he did the album artwork for The Game Of Life and Motherland. He’s a really fuckin’ good artist and we came to him with some really solid ideas. It was a long process, months of talking back and forth talking about what we were going to have. He did a lot of hard work on this record and we really fuckin’ appreciate him. We wanted it pretty dark and icy or something.

So do you miss being in your motherland of America?
Sean: Yeah, it has its ups and downs. I don’t want to go too much into that. [laughs]

So how do you pass the time driving across Canada?
Sean: We love all the scenery. We’ve been driving long fuckin’ drives, like 14 hour drives, like 3 consecutive days in a row. Anyways we’ve been seeing a lot of gorgeous stuff and we’ve been all caravanning. It’s really nice cause we don’t have a GPS in Canada so we’re kind of lost so all the bands; Volumes, Fall In Archaea and Structures, we all caravan together and that’s pretty fun. Every couple of hours we pull off, hangout and get a bite to eat then keep going. We are all together and we have never really done that before and it’s been a new experience caravanning. It’s better to travel like that.

Yeah must be better for getting to know the other bands.
Sean: We’ve toured with Structures and Volumes before so we were all familiar with everyone, except the Fall Of Archaea dudes but those guys are really sweet anyways.

When you are not touring or doing any band things what do you do?
Sean: We write a lot of music when we’re home. We ride our bikes a lot and live right on the beach in Santa Cruz. We pretty much all live together and we work together to make dinners with each other. We’re like a family at home as well as on the road. Our guitar player Jaeson lives an hour away from us in Monterey Bay and we live in Santa Cruz. Jared is also living with his girlfriend and some friends here and there. It’s mainly me, Greg, Garin and were all staying at Arthur’s house. It’s really nice cause the beach is like five minutes away. We have barbeques and a lot of good friends out there.

So what’s next for Arsonists Gets All The Girls after this tour?
Sean: We are going to be at home for a little while and start writing again. We have some tours planned in December so far, but we can’t really announce anything yet. But hopefully some sweet stuff.