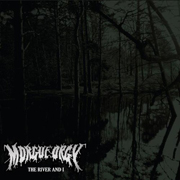 What really caught my attention, and kept it, are the piano and synth tracks that run behind the metallic onslaught. The clean, serene-sounding piano tracks that are layered behind the insane vocals and distortion really make the difference. This disc hits hard and the punishing guitars, thundering drums and menacing throat-ripping vocals that do not let up until the very last track, “Argyle Smitherines.”

Though a pretty short disc; it’s an EP with 5 tracks clocking in at just over 20 minutes, the band makes good use of those time. Notable tracks on this CD include “The Arkham Waltz,” which as far as I am concerned, is undoubtedly one of the heaviest out of the five tracks and my favorite “Such An Unsuccessful Abortion” which also features some cleaner vocals that I think work really well.

Bottom-line The River And I is a solid release and one that I believe will hold its own amongst the others in the death metal scene; and should garner the band a bit of attention. This is absolutely a group that is heading for bigger and better things.  [ END ]

01. The Black Of Hearts
02. The River And I
03. The Arkham Waltz
04. Such An Unsuccessful Abortion
05. Argyle Smitherines