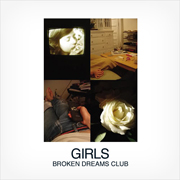 Girls are a California outfit built around the duo of Chistopher Owens and Chet “JR” White. At this point, if you’re even remotely plugged into the ‘scene’, you’ve probably heard of them, or at least unknowingly taken in one of their singles. They got lumped in with hipster culture due to their fashion sense – or lack thereof – and the ability to rehash old songs while convincing people that it’s ‘different’; all accomplished whilst taking copious amounts of prescription pills.

They released a record in 2009 laconically titled Album, and on November 22, 2010 they released the new EP Broken Dreams Club. Usually, this slight blip on the trajectory of a hyped band wouldn’t deserve much attention, but this is a bit different. The first album was a screechy, immature front; obscuring the backgrounds of surprisingly sublime melody. This time around, they’ve culled the irritating squeals, and upped the clean, sharp musicianship.

This effort is calculated yet relaxed; letting the surf-inspired guitar glisten and allowing Owens’ vocals to soothingly command attention. It’s a strong release; mixing modern honesty with throwback melody and making it unique. And anything that sounds this much like Elvis Costello deserves some credit.  [ END ]