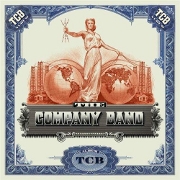 The Company Band’s new album is good and loaded with rock tunes with some sweet guitar riffs that give the whole offering a nice edge. The band has a traditional sound with rolling drum beats, macho vocals and again, swanky, edgy guitars. The album doesn’t offer anything unique as far as artistic creativity goes, but it does bring some plain old, damn good music.

The band’s self-titled debut is easy on the ears and there’s sort of a genuine sincerity behind their sound. In other words, there’s no frills and lots of skills. For those who don’t know, The Company Band is a rock supergroup of sorts and features Clutch frontman Neil Fallon, Fireball Ministry frontman James Rota, CKY drummer Jess Margera, Guitarist Dave Bone, and Fu Manchu bassist Brad Davis. A hefty line-up that in many ways showcases the individual members’ influences.

Overall the band and release are both somewhat generic, but do remain highly enjoyable. Neil Fallon’s vocals are instantly recognizable and though they don’t differ much from his work in Clutch, they remain equally good. The Company Band certainly has a good sound for rocking out and I wouldn’t be surprised to see more releases in the future.  [ END ]