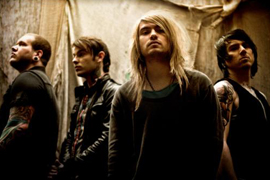 The Skinny: Three of the four members of It’s Alive have played together, off and on, since they were teenagers in Lake Mary, FL, a small town about 30 minutes outside Orlando, where vocalist and lyricist Zach Webb first met and formed a musical partnership with drummer Eddie Matta, often joined by bassist Juice Dean. The current incarnation of the band, with the addition of guitarist Clay Haywood, has been together a little over two years, but Human Resources, their debut album for Wind-up Records, boasts the camaraderie of four like-minded musicians on a mission.

The first single, “Pieces,” offers a taste of this “burning sound,” a heavy rock and roll bottom provided by the rhythm section of bassist Dean and drummer Matta that gives way to lush melodies, characterized by Webb’s full-throated, emotional vocals and Haywood’s anthem-like guitar riffs. It’s Alive’s debut is the album the band has prepared all their young lives to make. “We’ve really studied the structure of how to turn a good pop melody into a great song,” explains Webb, originally from California, though he moved with his family to Lake Mary when he was just five. “Taking those guidelines, and being patient, has made a big difference in this band since we started.”  [ END ]