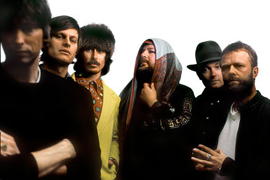 The Soundtrack of Our Lives – “Flipside (Live at Lime)” [Free Download]

The Skinny: On a rainy afternoon in February, Göteberg, Sweden’s The Soundtrack of Our Lives made their way to Stratosphere Sound (which counts ex-Smashing Pumpkins guitarist James Iha as one of its owners) in New York City. Only hours after landing, they plugged in their equipment and cranked out five fantastic numbers that comprise Live at Lime with The Soundtrack of Our Lives.

This just-released exclusive EP for LimeWire Store was engineered and mixed by Grammy-winning producer Geoff Sanoff (Stephen Colbert, Nada Surf, Michael Stipe). It comes hot on the heels of the sextet’s well-received sixth album, Communion, where the Grammy-nominated group struts their classic-rock sound, a mix of epic neo-psychedelia and urgent, riff-laden soul.

“We didn’t really think about the songs we played,” said vocalist Ebbot Lundberg about the band’s Live at Lime session. “I can’t really analyze how it works. If it feels good, it feels good.”

“TSOOL embody what we hope for when recording these sessions – great musicianship, a fun attitude, and a willingness to play around and give us fresh takes on their material,” said Tom Monday, Director of Partner Relations. “Add an award-winning engineer like Geoff Sanoff to the mix and it’s like magic – it was a joy to watch these guys at work.”  [ END ]