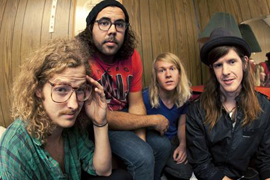 Queens Club drummer and programmer Jake Ryan took some time out of his bands busy touring schedule to speak with me about the group and their new CD, Young Giant. The band was formed in 2008 by ex-members of The Chariot and their new release Young Giant is filled with high-energy melodic tunes that are quite pleasant to listen to. Solid musicianship abounds, as does the ability to write fantastic hook driven accessible music that most fans of the genre should really dig. Young Giant is a good disc and Queens Club is band that is well worth checking out.

Now that your brand new CD, Young Giant, is complete, how do you feel about it? Are you satisfied with the outcome?
Jake: Well, we actually finished the record two years ago. It was the first thing that we did when we put this band together basically. We just thought it would be a good idea to be able to shop something good sounding to labels and when Tooth & Nail Records picked us up, they dug it so much that we decided to release it as our first record. I’m totally happy with the outcome, and can’t wait for everyone to get a chance to hear it.

Different groups have unique ways of writing their songs. How do you guys go about writing your music? Is it a collective effort or is it more the efforts of one particular member of the band?
Jake: In every band I have ever been in and no difference with this one. There is always a couple of people who write a lot of riffs or “bare bones” of a song, then there is always an element of collective writing that is done to finish it. Other times it is totally a collective effort for the complete process. I write a lot; since I do a lot of programming for the band, I will generally start with some programming ideas and then build other instruments from there. Dan writes a lot of the music and we will all work together with him to make it a complete thought or hopefully a tune that is cool enough to play.

Every band has its musical influences. What are some of the other bands and artists that have greatly influenced you guys and your music?
Jake: In all seriousness to this question, my most major influences growing up, and still to this day have come from my dad’s record collection. There is a quote by George Santayana, “Those who don’t know their history are doomed to repeat it…” In the music community, music repeats itself all the time, which is not a bad thing necessarily. I think a lot of really fantastic ideas have already been used and it is sometimes really exciting and refreshing to bring back some of those old ideas into new music that we are writing. I would also be a fool to say that every thing I hear is not an influence on my musical writing, there are some really amazing bands out there that I totally love what they are doing. As for our band, I think it is easily a collection of what we all like mashed up into music that we find enjoyable to create and play. So in short, the band that we are mostly influenced by is Metallica… but seriously, it is.

The name of the band, Queens Club, is interesting to say the least and sounds as if there is a story behind it. Where did the name come from and what is the story?
Jake: I was driving Dan home one night after we had been writing some stuff. On the way home, we were in the car asking each other, “What are we going to name this band?” After a round of, “I dunno.” We decided to say one word that we each liked. His was, “club” and mine was, “queens.” Thus, the name “Queens Club” came about. Not really knowing if it would stick, but sure enough it did.

When you began to put this album together, were you concerned at all about commercial success?
Jake: Well, I think we wanted people to like the record. This is definitely a big step in a different direction then the previous band that Dan and I were in. Since it is more “listenable” music we definitely aimed to try and have a few songs that could be played on the radio. Before we even went in and recorded this record we had already found ourselves with a single out on a local major market radio station locally, so we kind of knew what we were getting into when recording our record. Potential to actually have airtime on a major station was something that opened my eyes to how different this band was then previous bands that I had been in. It’s exciting and its fun when you can create something that is appealing to people outside of yourselves and your group of friends.

How much roadwork do you expect to be doing this 2010?
Jake: As much as humanly possible. We will definitely be out to support our record, as well as being out on some more major supporting tours. We will also be hitting a small circuit of festivals in the early spring/summer time. Keep an ear to the floor and I promise we will be out there to come hang with everyone that is up for hangin!

Are you looking at any particular bands you will be touring with?
Jake: I mean there are some bands that definitely make the list of bands that I think would totally be awesome to get a chance to share the stage with. I hope that in the future, near or far, we will be able to do that. As for now, we are just taking the opportunities that fall into our lap. We have been completely honored and blessed with some great tours thus far. Some really great friends have been made on those tours for sure.

When you are on the road for a while, I am sure you see and experience many different things you might not even have known existed. Are there any stories that stand out in your mind as being exceptionally strange or odd?
Jake: Well, this is not really the strangest thing ever but the last tour we did we had some of the absolute worst driving conditions that I ever had to drive in. Since this winter has been so crazy for the whole country, the Midwest was definitely still hanging out with tons of snow in March. I was driving us from Denver, back to Kansas City for a day off, and the stretch of I-70 that you take to get to KC was so covered with snow for the whole 600-mile drive. At some point there were not even ruts in the snow where we were driving, it was as if we were the first people to even drive on I-70 following this blizzard that was heading east. It was terrible and so scary! We made it, obviously… but man it was the worst weather I’ve ever had to drive in, and definitely the worst touring conditions.

When you are out on the road anything can happen and often does. Can you think of any disastrous events that happened while out on tour? How did you solve the problem?
Jake: We have been lucky to only have had like one minor event arise. Our rear door on our van locked up and would not open, and the way we roll right now (without a trailer) we would not be able to get our equipment out. So we found a dealership that had the parts and they fixed it. However, it is always a little weird when you have to like step into “normal life” situations and you are just this motley looking crew of guys that everyone knows or assumes you are in a band. You get the whole “Y’all in a band?” “Y’all write your own songs?” “Can we have a CD?” experience and it’s something that you usually can joke about for a while afterwards. So nope, nothing super dramatic just some normal fixes on the ol’ van. Lame! Sorry!

Any closing words?
Jake: Go buy our record, Young Giant in Hot Topics everywhere, or on iTunes, or at Zambooie.com. Come hang out with us if we are in your town… we love meeting new people and making new friends!  [ END ]