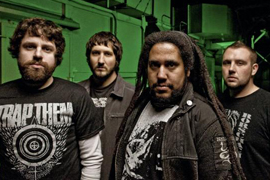 Interview with Wrench In The Works drummer Andy Nelson

Recently Wrench In The Works drummer Andy Nelson sat down with us to answer some questions about the band’s sophomore release, Decrease/Increase. Their debut CD, Lost Art Of Heaping Coal was a heavy amalgamation of hardcore influence and brutal metal bashing and while Decrease/Increase definitely has both of those traits, it also pushes the boundaries and the envelopes of the genre into what I would call almost experimental. For fans of the extreme, this is a CD that is well worth checking out.

Now that your brand new disc, Decrease/Increase is complete how do you feel about it? Are you satisfied with the outcome?
Andy: Yeah we are more than stoked on the new record. If we have any complaints it would be to have the CD remastered, the guy who mastered the CD did a good job, but if we had some more time we would have went to someone better to be honest. Overall, musically we are stoked on the songs and production-wise we couldn’t be happier with the outcome.

The artwork by Dave Quiggle is quite amazing. How is it tied to the albums title?
Andy: The skeleton represents dying to yourself or dying to the world. The whole idea behind “Decrease/Increase” is decreasing yourself so Christ can increase in your life. So we gave Dave that basic concept and he ran with the idea. Dave is an amazing artist who really helped us complete our concept artistically.

The band keeps things interesting thematically. Can you talk about some of the subjects you tackle on this record?
Andy: Yeah! We have a song on this record called “Project AK-47” which is about an awesome ministry called Project AK-47, which helps save child soldiers in Southeast Asia. Highly recommend you check them out online and support their cause. We have a few songs that are inspired by the idea of “Decrease/Increase” one called “A Desert Voice” which is about John The Baptist seeing that he is the one who is quoted saying, “I must decrease, so Christ can increase.” A song about the night before Jesus was crucified when he was in the Garden of Gethsemane, where he was quoted saying, “not my will, but yours be done,” which ties in more with the basic “decrease/increase” idea. Another song called “Walk Amongst the Tombstones” which is a song dedicated to our close friend who had been struggling with heroin addiction. “Vultures” is a song about the end of times. Those are some basic ideas on the record.

What can fans expect when they pick up a copy of Decrease/Increase?
Andy: An aggressive, fast and furious record which holds nothing back, which is in your face, heavy and pissed!

Do you spend lot of time on trying to vary the music or is it something that just comes naturally?
Andy: It just comes naturally, collectively the band has lots of different influences and they just come out when we write. This record we wrote to flow like an album so we purposely had slower songs, or faster shorter songs, all to tie in with each other and have a basic flow. Our last record was more a collection of songs, whereas this record was wrote differently and mapped out before hand.

Are there any tracks that are personal favorites or that have good stories behind them?
Andy: My favorite song is “Purge the Creep” and in my eyes it was one the most fun songs to write and record, and it has a really positive message. Basically, no matter what the situation is never give up praising and thanking God and following his plan. I think that’s something we can all relate to and need to be reminded of.

How much roadwork do you expect to be doing this 2009?
Andy: As much as God has in store for us. We’re ready to go full time just waiting for the go ahead!

Are you looking at any particular bands you will be touring with?
Andy: Again we just want to tour as much as possible with Christian bands or secular bands. We just want to get on the road and share our message and music with kids. I’d like to tour with anyone from Living Sacrifice to Converge to Advent to Tragedy but I tend to daydream a lot.

How is the current economic slump affecting your band?
Andy: Overall it’s affecting the music business but I think the nature of the money hungry music industry that’s just looking to promote here today, gone tomorrow generic bands that all sound the same tends to affect us more than the economic slump.

If you could jam with any famous musician, dead or alive, from any century, who would it be and why?
Andy: I would want to jam with John Coltrane just because who wouldn’t want to try and back that guy up. I bet he would dig blast beats and raging double bass!

Any closing words?
Andy: Thanks a lot for the interview. Please check out Decrease/Increase out on Facedown Records in stores and online now. And support the ministry Project AK-47!  [ END ]