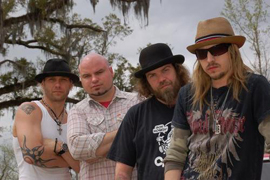 7dayBing is a straight up Rock and Roll band comprised of power house musicians, Kenny Olson (formerly of Kid Rock), Shannon Boone, Jon Nicholson and 3 Doors down bass player Todd Harrell. While I have come to appreciate many of these genres, the type of rock that really strikes a chord and resonates with me is the more commercial form of hard rock. I just am a sucker for big glossy productions, big melodies, great guitar playing and catchy tunes. I said all of that to say that the latest release from 7dayBing fits this bill perfectly. I had recently a chance to speak to Jon Nicholson and Shannon Boone about the band and their music.

Could you tell us where the name 7dayBinge comes from?
Nicholson: Todd and I wrote the murder ballad, “Cold Dark Grave,” with Todd’s bass tech Judah Siegel, in Amsterdam a couple of years ago. Three Doors Down had taken me along as their opener on a European run at the end of their “Seventeen Days” tour. They were kind enough to invite me to ride one of the double-decker buses around Germany. The name, 7dayBinge, was born in the front lounge of the upper deck of that bus, somewhere after Amsterdam. The song, “7dayBinge”, came later.

Every band has its musical influences. What are some of the other bands and artists that have greatly influenced you guys and your music?
Boone: There are so many it would take all day. We are influenced by everything all around us musical and not.

What are some of the songs you get the best audience response to?
Nicholson Everyone wants to sing, “I was born on a 7dayBinge”. “End of the Road” also rocks live!

Boone: “7dayBinge” always gets the crowd goin’! We open with “Oak Tree” a lot and that one is always rockin’!

The album is graced with an incredible organic and warm sounding production that is very easy to listen to while retaining a bit of grittiness. Were you guys satisfied with the outcome?
Nicholson We’re stoked on how the record came out!

Boone: Hell yeah we are satisfied! If we weren’t we wouldn’t be talking about it right now because we never would have put it out!

What can fans expect from the disc?
Boone: Fans can expect some down and dirty groovin’ ass Rock n’ Roll.

How much roadwork do you plan on doing in the upcoming year?
Boone: We plan on touring as much as possible.

Are there any plans to head overseas?
Boone: Absolutely! We would love to go on an overseas binge!

Are you looking at any particular bands you will be touring with?
Boone: We always love and have a blast doin’ shows with our boys 3 Doors Down.

Collectively you have been in the music business for quite a number of years now. What drives you to keep going year after year while the music business is not in a very good state?
Boone: The music is what drives us that’s why we do this. It’s our love of music and creativity.

What kind of music are you listening to? Do you keep abreast of new music?
Boone: Mostly polka and elevator right now.

When you have some free time and the band is off the road what do you like to do?
Boone: Write and produce music, cars, wreak havoc of all sorts, hang with my family and friends.

If you could sum up your feelings on music and what it means to you, how would you?
Boone: Music is life, it means everything! Without it life would be pretty dull.  [ END ]