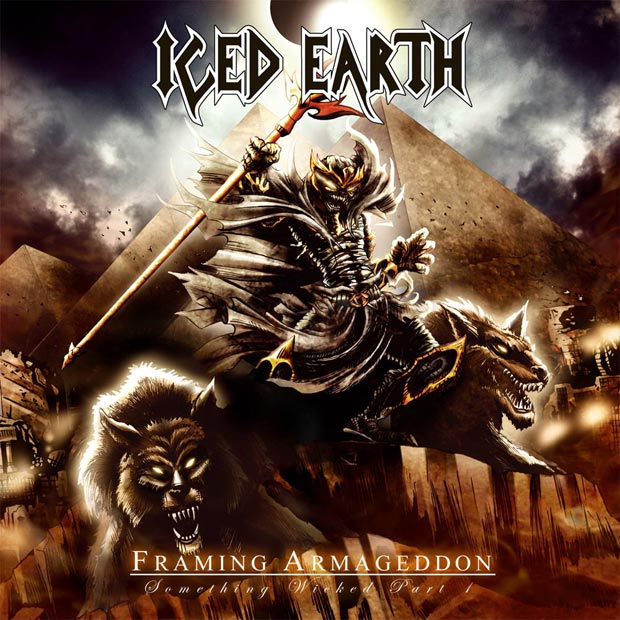 In the first decade of the new millennium many significant events happened on September 11th. To name a few: the 911 attack on the twin towers, Swedish foreign minister Anna Lindh died and Cartagena Protocol on Biosafety took effect. In addition to these and other memorable events, on September 11 2007, Iced Earth released their eighth album Framing Armageddon: Something Wicked Part 1. This is the first part of the Something Wicked Saga based off a trilogy of songs from their fifth album Something Wicked This Way Comes.

The story as stated by Iced Earth: “’Framing Armageddon: Something Wicked Part 1′ tells the story of the Setians, who were the original inhabitants of Earth, and are directly descended from the “Great Architect”. They are said to have nearly omniscient knowledge. Humans, who have developed space travel, invade Earth in a bid for “ultimate power and ultimate knowledge”, killing all but ten thousand Setians.

The remaining ten thousand go into hiding in the mountains in the east. The Setian High Council, which consists of the twelve Elders and the High Priest, make a plan to get revenge on the invading human race. They plan to initiate “The Clouding”, which involves brainwashing all the humans and making them forget their origins. Once completed, the Setians will manipulate history by creating religions to further divide the humans. Once human kind is sufficiently divided, after ten thousand years, the Setians will await, as the prophecy told millennia ago, the birth of the Antichrist, Set Abominae. Set Abominae will destroy all of the human race and execute the revenge the Setians have long awaited. Framing Armageddon tells the story from the prophecy to the events right before the birth of Set Abominae.”

“Overture” is the opening track on the album, a simple percussion beat overlaid by clean guitars, violins and ending with choir vocals which gives the impression of singing in the coliseums. This leads into the song “Something Wicked Pt. 1” which ignites the pace of the album with galloping guitars, strong/high vocals, simple but tight drums and a bass to tie them all together. The album introduces the new guitarist Troy Steele (Ma Kelley, The Criminals) and drummer Brent Smedley (Oracle, Prodigy). Even with these two new members, the band was able to keep creating the solid Iced Earth sound fans worldwide have came to love.

A song that caught my attention was “Order Of The Rose” , a song about The Setian High Council making plans to get revenge on the invading human race. It is a powerful song presented by slow guitaring giving it a crushing sound. Also there is a guitar solo in the song which is just phenomenal. Another song that grabbed me was “The Clouding” which involved brainwashing of all humans. The song is soft but later picks up momentum, capturing the mood of The Setian High Council. This is the longest song on the album clocking just over nine minutes.

Overall Framing Armageddon: Something Wicked Part 1 is an epic concept album. It is one of two of the Something Wild Saga. All fans of Iced Earth definitely need to pick up a copy of this album and listen through it a few times to understand the story. Others who would enjoy this album are fans of Blind Guardian, Symphony X, Demons & Wizards and Iron Maiden.  [ END ]