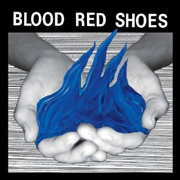 Blood Red Shoes originate from a small south-eastern town in England called Brighton. Laura-Mary Carter and Steven Ansell are the two members of the band, forming England’s secret White Stripes. They released their first album Box Of Secrets in 2008 and have produced a superior and infectious follow up this year called Fire Like This. They could easily be compared to The Kills and The Subways with their thick guitar sound and pounding drums. The power that Carter and Ansell produce is simply breathtaking and they certainly don’t fail to bring their sound with them on stage where they appear to be in their element.

Fire Like This begins with a bang. “Don’t Ask” is the first track and it, like most of the songs, possesses a fast pace with a quiet verse followed by a massive hook-ridden chorus. It is followed by the first single from the album, “Light It Up”. Again a slow verse builds up to a powerful chorus and even contains a neat intermission. Thankfully, this high standard of song continues right to the end of the album and you would be hard pushed to decide which track, if any, is average. Many bands fail to produce constant high quality songs, but Blood Red Shoes thrive because of their consistent brilliance.

While there is an element of quiet-loud-quiet-loud in each song there is a bit of variety added with “Follow The Lines” and “When We Wake” which are slower paced. Fire Like This definitely does not become repetitive and you can even hear elements of Arcade Fire and The Automatic in Ansell’s voice which helps mix up their overall sound. It’s perfectly set up too as the album starts off with real power, takes a small rest and then finishes off with a long slow and angst-ridden song called “Colours Fade”.

As with all successful two-piece bands the relationship between the two members needs to be tight knit which Carter and Ansell seem to be. Carter sings the majority of the time and does a great job doing so, while her guitar work sounds superb and very thick at times, making up for the lack of bass in the band. Ansell meanwhile has a good voice on him too, helping boost Carter’s fragile voice and he packs a big punch with his drums.

Blood Red Shoes are a superb band and Fire Like This is a superb album. If the band is set to play a gig near you I highly recommend you give them a shot as they blew Edinburgh away when they visited in March.  [ END ]